Cone beam computed tomography as an imaging tool in dentistry has varied clinical applications, one of which is viewing sinuses. The accuracy of measurements using CBCT is also commendable. The basic two-dimensional imaging though vastly used has disadvantages like superimpositions and changes in the quality of image secondary to positioning errors and processing the films.

A retrospective study was conducted after obtaining clearance from the Institutional Ethics Committee. One hundred CBCT images (50 males and 50 females) matched with age and gender with full FOV were retrieved. Information regarding age, sex, and systemic conditions, etc., of the study subjects was collected from their dental records. The subjects included in the study were healthy individuals without any pathology in the sinus and patients in the age range of 20 to 30 years. The reason for age criteria was due to the fact that the growth of frontal sinus completes or attains its development by 20 years and as age progresses the walls become thinner and hence, appears larger. The patients excluded from the study were those who reported with history of trauma or pathology to the sinus, absence of sinus unilaterally or bilaterally, syndrome patients, patients with congenital disorders and patients with history of surgical intervention, such as orthognathic surgery, sinus lift, or any surgery. The examinations were carried out using the Promax 3DMid (Planmeca Oy., Helsinki, Finland) CBCT unit. The radiographs were taken at 90 kVp, 8 mA, and an exposure time of 27 seconds. A slice thickness of 0.400 mm was used to assess the sections. The exposure parameters according to the standard default values were based on the FOV. 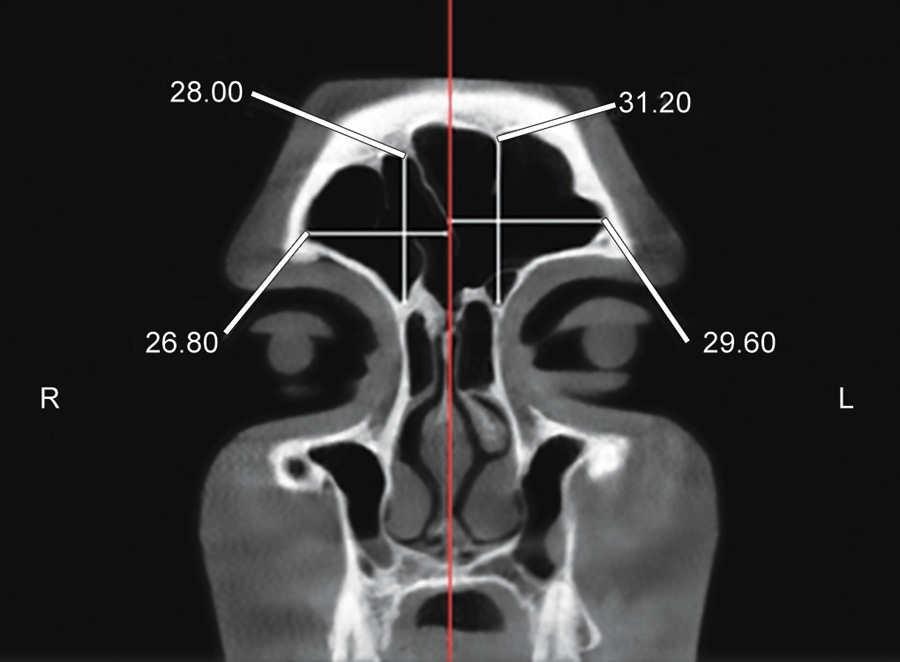 The paired t-test was applied to compare the difference in measurements of right and left frontal sinus in axial, coronal, and sagittal sections irrespective of gender. One hundred patients were included in the study, which was divided into 50 males and 50 females (Table 1).

This test was done to compare the difference in measurements of frontal sinus between males and females (Table 2).

Comparison of the right and left frontal sinus measurements anteroposteriorly and mesiodistally between the two groups showed that both the measurements were greater in the males. The p values for right AP, mesiodistal and left AP measurements are <0.001 and the left mesiodistal measurement had p = 0.007, all of which were statistically significant.

Frontal sinus is a hollow cavity in the frontal bone, and it is unique to each person. Like fingerprints, frontal sinus is unique in each person, even in monozygotic/dizygotic twins. Compared with fingerprints, frontal sinus assessment is preferred as soft tissues can get destroyed or mutilated when it gets burnt,4 and its arch-shaped nature with internal bony structure protects it from getting decomposed or damaged even in high impact accidents. Frontal sinuses also remain stable throughout human life. Hence, it is preferred in forensic investigations.5

In this study, on comparing the left and right frontal sinuses irrespective of gender, we found that left side was larger when compared with the right side, which is in accordance to the study conducted by other studies by Rubira-Bullen et al6 and Soman et al.7 The reason for the asymmetry in individuals of the same age could be due to the fact that both the sinuses develop independently and have different rates of osseous resorption,3,8-10 and our result was not in accordance to the study conducted by Belaldavar et al4 where they found it vice versa.

The difference in the frontal sinuses among sexes could be due to factors, such as genetic followed by muscular, nutritional, and hormonal.11,12 Our study showed that frontal sinuses in males were larger than in females, which was similar to studies conducted by Camargo et al,3 Belaldavar et al,4 and Rubira-Bullen et al.6

According to our study, we found that males had a larger frontal sinus and the left side of the frontal sinus was larger than the right. These findings help us in sex determination in mass disasters, crime scene, or if the body is severely decomposed. Although the radiation exposure to the patient using three dimensions is much more compared with two dimensions, the benefits outweigh the disadvantage, which makes CBCT a valuable tool in assessing the anatomy of oral and maxillofacial structures.