Needles and sharp instruments are an essential part of today's dental practice. Injuries from these items are a major concern for dental practitioners because of the risk of blood-borne diseases transmission (HBV, HCV, and HIV). The estimated transmission rates for HBV, HCV, and HIV after an NSI from a dental needle are 6 to 30, 2.7 to 10, and 0.1 to 0.3% respectively.1 The risk of infection to the dentist or dental student depends on the prevalence of the disease in the patient population and nature and frequency of the exposures.2

Using sharp instruments in the narrow confinement of the oral cavity and the possibility of unexpected movement of the patient have always subjected dentists and dental students to percutaneous injuries while performing surgical procedures. Hence, they are at high risk to acquire blood-borne diseases.

This was a retrospective epidemiological investigation conducted among 230 undergraduate dental students studying at College of Dentistry (Jazan). Before commencement of the study, approval was obtained from College of Dentistry review board and from the ethical committee. Informed consent was included in the questionnaire.

The fourth, fifth, and sixth year undergraduate dental students and interns working in the department of oral surgery were included in the study. Those who were not willing to participate were excluded from the study.

An anonymous questionnaire pro forma was prepared including closed- and open-ended questions divided into two parts. First section included demographic details, such as sex, year of study, and whether right or left handed. Second section included questions about the incidence of injury with sharp instruments, such as frequency of injuries, number and nature, reporting practices, type of device that caused the injury, the event that leads to the injury, and whether the event was reported or not. Information was also gathered on the vaccination status of students and reasons for not reporting in cases of failure to report. Prevalence of injury related to other departments of dentistry was excluded.

Confidentiality and anonymity were maintained, and only researchers had access to the data. The questionnaire was pretested on a randomly selected 15 student sample to ensure its practicability, validity, and reliability (Cronbach's alpha = 0.88).

Data were entered into statistical software (SPSS, version 17.0) for analysis. Basic statistics were calculated which includes prevalence rates and overall numbers of NSIs. Descriptive statistics were obtained, and frequency distribution, means, and standard deviation were calculated. Student's t-test was used for comparison of mean scores of injuries. A p-value of 0.05 or less was considered as statistically significant.

The study was conducted among 230 undergraduate dental students, 83 male and 147 female participants. Further, they were assorted according to academic level of study; 74 in fourth year, 71 in fifth, 56 in sixth, and 29 in internship. Most of the study participants (214) were right handed and only 16 were left handed as illustrated in Table 1.

More than half of the sample size (54.8%) had suffered sharp instruments injury in different anatomical sites in oral surgery clinics, and of these, 67.4% were pricked with gloves on. Only 27% of the students reported to the faculty after being pricked. Almost all the participants had the habit of recapping local anesthesia needle after use and around 60% of subjects were vaccinated against hepatitis B (Table 2).

It was noticed that female participants were comparatively more involved with sharp injuries, and left-handed practitioners were having a slightly higher incidence of injuries (Table 3).

Demographic profile of the population

Response of study participants regarding NSIs

Prevalence of NSIs among the study participants

Most of the participants (55.3%) had a single incidence of injury during the past 1 year and 16.2% were stuck for several times (Graph 1). Needles (34.1%) were the main instrument causing the injury and very few got injured with stainless steel wires (2.2%) as shown in Graph 2. The occurrence of injury on the dominant hand was less in number (42.1%) than the nondominant hand (57.9%). The majority of injuries took place while operating inside the patient's mouth (52.4%; Graph 3). 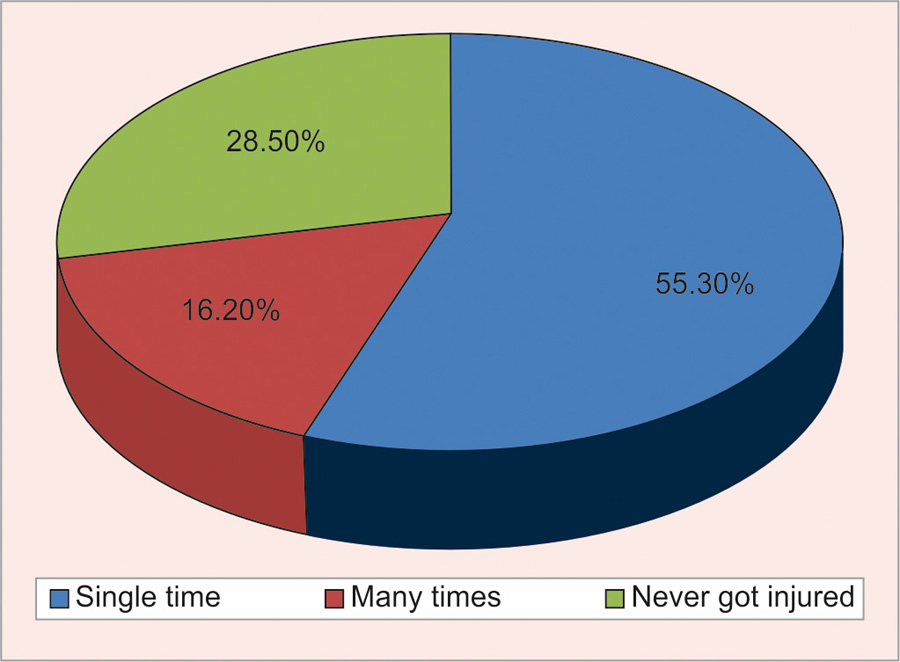 Instrument with which injury occurred 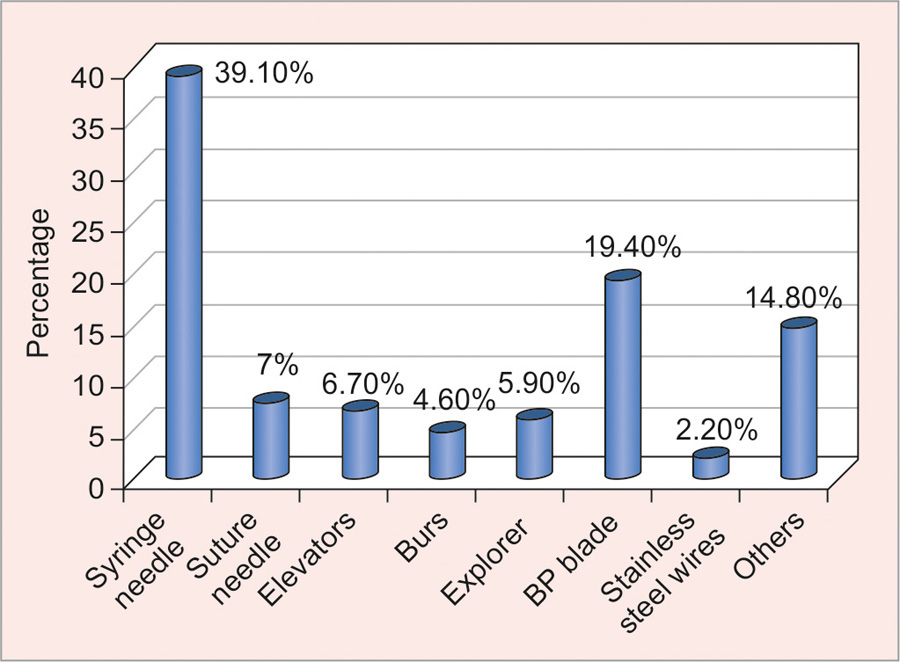 Occurrence of needle injuries among the study participants 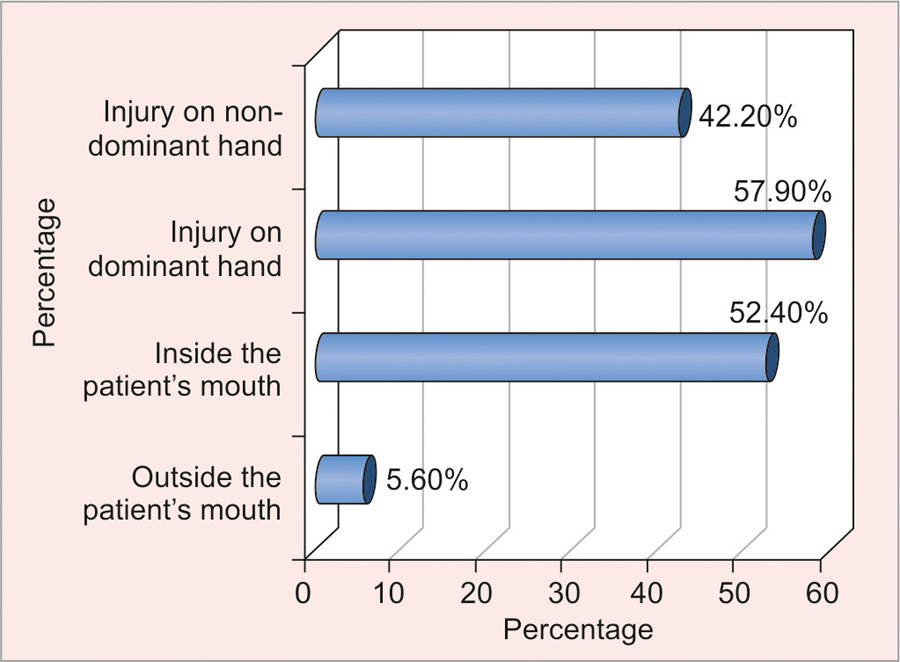 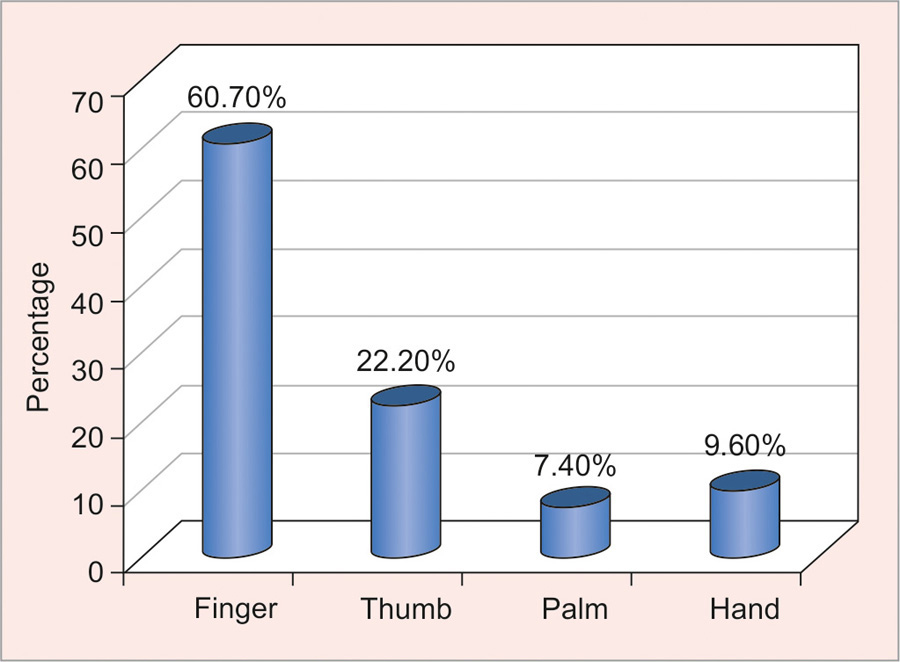 Circumstances of the most recent needle injury 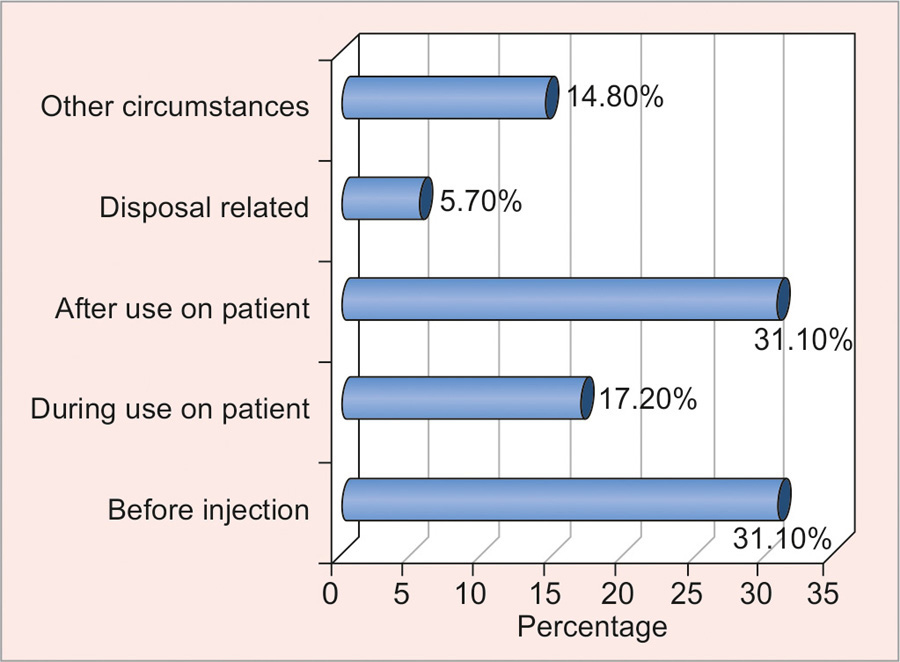 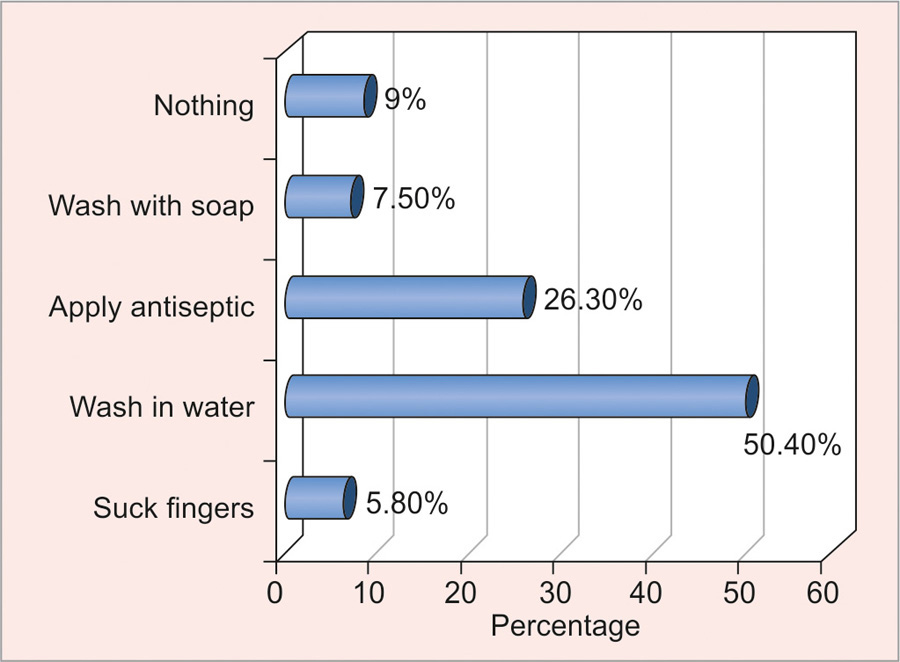 Exposure to a variety of pathogens is always a risk factor for the health care workers. Hepatitis B virus, HCV, and HIV are the most common blood-borne viruses transmitted occupationally from infected staff to patients or from infected patients to the staff.3

By investigating and inspecting the causes of injuries, valuable facts may be gathered. Evidence regarding the circumstances surrounding the conveyed injury may be valuable in preventing further injuries by revising work practices.4

Occupational hazards might be of a greater concern for an inexperienced individual, working in a new environment, e.g., medical/dental students and house officers during their clinical training rotations.5

There is a high risk of exposure to pathogens among health care students while they become involved in patient's investigation and treatment during their clinical training.6 The routine use of sharp instruments, i.e., hand, rotary, surgical, hypodermic needles, suture needles, and lancets in dental treatment, the presence of saliva and blood, various bacterial flora in the mouth, needle design, recapping practice, maneuvering needles in patient-linked work, conflict between health care workers on sharps while cleaning, handling/transfer of specimens, passing/handling devices, or failure to dispose of the needle in puncture-proof boxes, all contribute to the hazardous nature of the dental workplace for blood-borne infections.6-8

The findings of the present study were consistent with those of many studies on accidental exposures to blood-borne pathogens in health care settings.

In the present study, more than half of the sample size (54.8%) suffered sharp instruments injury in different anatomical sites, and of these, 67.4% were pricked while wearing gloves. Only 27% of the students reported to the faculty after being pricked. In a study by Osman,6 69.9% of students were exposed to the sharp instruments injury during their study of 12 months. In contrast, Jaber3 reported NSIs in only 23% of dental students in their study of 230 students, and among these injuries, 26% injuries occurred while recapping of the needles. Furthermore, a study by Mungure et al10 found NSIs in 29% of the dental students. In the present study, almost all the participants had habit of recapping the needles after use, and around 60% of subjects were vaccinated against hepatitis B.

Our findings are compared with that of Moodley and Naidoo,4 in which 43% had experienced a single injury, while more than half (57%) had suffered more than one injuries, and almost a quarter (24%) had experienced three or more NSIs.

In this study, needles (34.1%) were the main risk factors for injury followed by suture needle (7%) and elevators (6.7%), which is in accordance to the study by Osman,6 in which hollow bore needle was the most common injury-causing tool.

Needlestick injuries from a hollow bore needle pose a greater risk of transmission of blood-borne pathogens than from a solid needle, because blood remaining inside the bore of the needle after use contains a large volume of viruses than the relatively small amount of blood remaining on the outside of a solid core needle, such as a suture needle.4

In our study, washing the injury site with water (50.4%) was the most common action, while antiseptics were used to clean the wound by 26.3% of the injury-sufferer. The current study showed a higher incidence of injuries on nondominant hand (57.90%). Similar studies conducted by Moodley and Naidoo4 and Siddiqi et al11 showed that fingers of the nondominant hand that play a supportive role were the most common site of percutaneous injuries.

Slightly more than half of the injuries in our study took place while operating inside the patient's mouth (52.4%). Our findings are inconsistent with the study by Younai et al,13 who observed that more than 70% of local anesthetic-related NSIs occurred during needle insertion and/or needle withdrawal, while the rest of injuries occurred due to sudden patient movement at the time of attempted injection. Gaballah et al8 in their study observed that nearly 90% of injuries took place either during administration of local anesthesia or during disposal of the used needles.

Improved techniques can minimize exposure injuries by controlled movements of instruments under force, e.g., controlling movement while using an elevator or surgical bur, or using the appropriate retractors while injecting instead of retracting using the fingers.14 Fa and Cuny had introduced a modified retraction technique using a mouth mirror in preclinical anesthesia course with the goal of reducing needlestick exposure incidents. The results of this study show that there was a reduction in intraoral NSIs when a mirror retraction technique was introduced into the curriculum.15

Current Centers for Disease Control and Prevention guidelines state that used needles should never be recapped, purposely bent, or otherwise manipulated using both hands. One-handed recapping using a device or scoop technique is recommended for the prevention of such injuries. Announcing passage of instruments can likewise reduce injuries to other workers during transfer over the surgical field.11

Furthermore, the implementation of education, universal precautions, elimination of needle recapping, and use of sharps containers for safe disposal can reduce the NSIs with additional reductions possible through the use of safer needle devices.

Infection control teaching and training should be an integral part of the curriculum of all health disciplines including medical, dental, nursing, as well as for any institute providing training to paramedics. Moreover, each health care setting should have an active and dynamic infection control program. In due course, this multifaceted approach will definitely improve the attitude, knowledge, and practices of health care workers including dental students toward NSIs.