Aim and objective: Aim of this case report is to illustrate a rare subcutaneous emphysema during third molar extraction.

Background: Third molar extraction is a common procedure in oral surgery. Common complications that may occur after the surgical procedure include bleeding, pain, swelling, and trismus. Subcutaneous emphysema in an unusual complication during dental extraction and it could lead to life-threatening situations.

Case description: In this report, a 26-year-old female patient experienced a facial subcutaneous emphysema, occurred in a few seconds during the surgical extraction of an impacted lower left third molar performed by the use of a high-speed turbine. The patient showed a normal mouth opening but an impossibility to fully open the left eye; there was no pain or breathing difficulties. A manual reduction of the emphysematous zone was performed. Amoxicillin 875 mg with clavulanic acid 125 mg in tablets every 12 h for 6 days was prescribed; 4 mg of intramuscular betamethasone (Bentelan, Defiante Farm Unipessoal LDA, Funchal, Portugal) were injected locally at the intervention site, and 80 mg of ketoprofen every 8 hours in case of pain, were administered after surgery; the patient was observed for 4 hours then allowed to leave the hospital. Follow-up visits were scheduled at 1, 3, and 6 days after surgery. The healing was obtained in 6 days.

Conclusion: The prevention of subcutaneous emphysema requires minimal invasive surgery avoiding the use of high-speed air-turbine and flaps should be minimal elevated and properly retracted by an expert operator. Even if subcutaneous emphysema is self-limiting and usually heals in 7- 10 days, its prevention and early and accurate diagnosis are essential to avoid complications or life-threatening conditions.

The surgical extraction of third molars is a frequent procedure in oral and maxillofacial surgery. Tooth extraction is indicated in patients with problems caused by impacted teeth. Alveolar osteitis, bleeding, pain, swelling, and trismus are common postoperative complications associated with this surgical operation. Subcutaneous emphysema is considered an unusual but serious complication.1,2 Emphysema occurs when air is forced into the fascial space beneath the tissues. Clinically, we can observe tumor and crepitus on palpation. The volume of air under the tissue and the involved way determines the severity of clinical situation. Subcutaneous emphysema has been also reported after root canal treatments and surgical endodontic procedures and after traumatic injuries. In some cases, emphysema can be exacerbated or favored by the patient’s behavior such as wrong cleaning attitudes after surgical procedures or abuse of drugs inhalation.3,4,5 This condition is usually limited to the head and neck but migration to other tissue planes is possible: in some cases, the air could migrate deeper in the tissues through the pterygomandibular, submasseteric, infratemporal, orbital, parapharyngeal, and retropharyngeal spaces. Through the deeper spaces, air could also migrate to the mediastinum.6 Heyman and Babayof reported an incidence of 71% of emphysema after dental procedures and the most common causes were correlated to the use of the air syringe, high-speed turbines, or a combination of the two.7 Timely diagnosis, close observations of the symptoms, early initiation of pharmacologic therapy, and straight follow-up are recommended. This case report presents a case of facial subcutaneous emphysema during mandibular left third molar surgery, and its postsurgical management.

A 26-year-old female patient presented in February, 2020 to the Department of Oral and Maxillofacial Sciences of University “Sapienza” of Rome with pain and swelling in the left mandibular third molar area. Intraoral clinical examination assessed the presence of gingival inflammation and suppuration around the lower left third molar associated with pain and dysphagia. Orthopanoramic radiography and cone-beam computed tomography (CBCT) scans were performed due to obtain proper informations on the exact relationships with the inferior alveolar nerve and the adjacent tissues. The element was partially impacted in the mandible, in horizontal position, with two separated, but not divergent roots, contiguous to inferior alveolar nerve (Fig. 1). 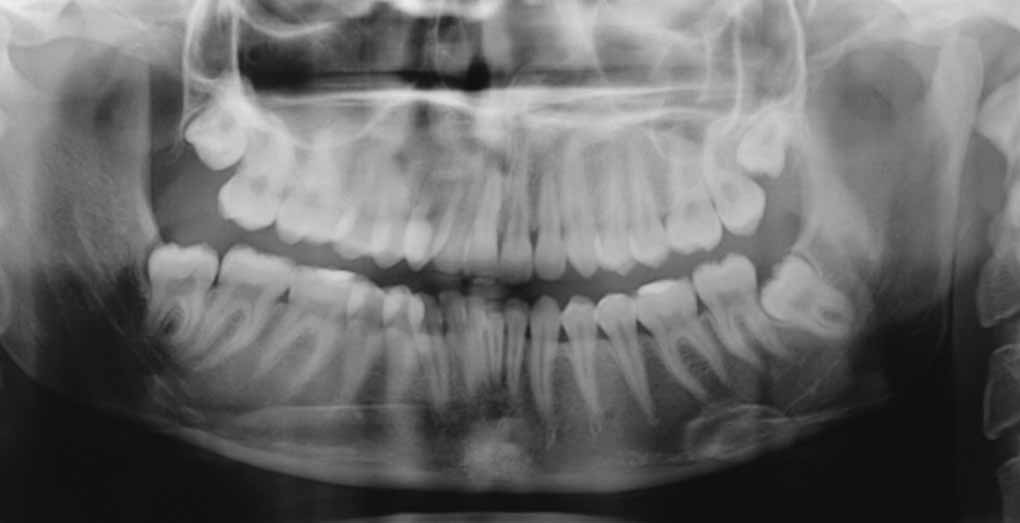 The treatment plan provided the surgical extraction of the included left third molar with the elevation of a full-thickness flap and odontotomy. The previsioned risks for the surgical procedure were the temporary paresthesia of the inferior alveolar nerve and lesions to the lingual nerve.

Routine preoperative laboratory tests (full blood count, blood clotting tests, glycemia, azotemia, and creatinine) and cardiologic visit with electrocardiogram were performed. The patient was informed on the risks and benefits of the surgical intervention. The informed consent was obtained, and the extraction was scheduled. After local anesthesia, a full-thickness flap with a release incision positioned mesially to the second molar was performed by using a bard parker #15 scalped blade. The flap was elevated and maintained by the use of a Langenbeck retractor.8,9 The complete crown exposition was performed through ostectomy with a Lindemann stainless steel bur on a low-speed contra-angle handpiece with sterile saline irrigation. Tooth section was performed by using a conventional high-speed air turbine with rosette cutter (length 28 mm and diameter 2.1 mm) and it was obtained partially. During this surgical phase, swelling was observed from the lower margin of the jaw, up to the orbital area, with the partial closure of the eye, in the left hemiface of the patient (Fig. 2A). The procedure with high-speed turbine was suspended. The retractor was held by the assistant in a wrong position and the air followed the way created by the partially disinserted fibers of the masseter muscle. The subcutaneous emphysema was located in the left infraorbital area, cheek, and mandibular angle.

Figs 2A and B: (A) Intraoperative tissue swelling from the lower margin of the jaw, up to the orbital area; (B) partial closure of the left eye

The patient experienced no pain or breathing difficulties, but there was an impossibility to fully open the eye (Fig. 2B); there were no lesions on the eye sclera; palpation reveals the presence of crackling, without pain and the patient showed a normal mouth opening. A manual reduction of the emphysematous zone was performed. The coronal odontotomy was completed by using a red ring contra-angle handpiece 1:5 with rosette cutter (length 28 mm and diameter 2.1 mm) (Fig. 3); the mesial portion of the crown was removed; by using the same handpiece the coronal-radicular odontotomy was completed and the remaining portions of the dental element were removed; rinses of saline solution, revision of the alveolar cavity, and suture with vicryl 3.0 were performed. 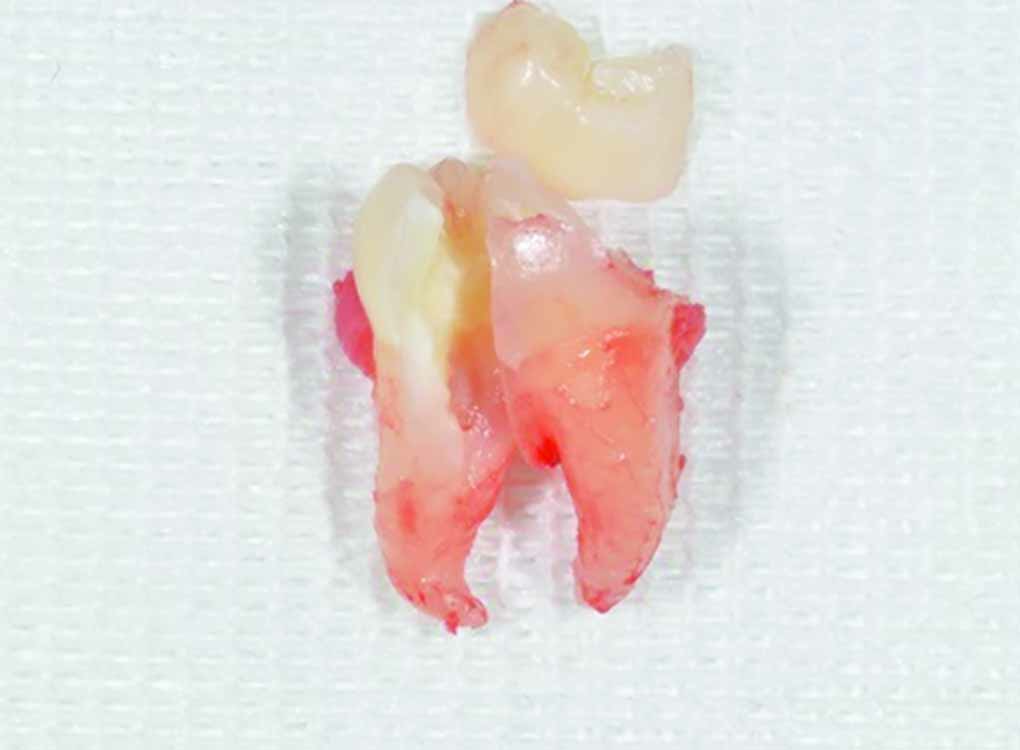 Amoxicillin 875 mg with clavulanic acid 125 mg in tablets every 12 h for 6 days was prescribed; 4 mg of intramuscular betamethasone (Bentelan, Defiante Farm Unipessoal LDA, Funchal, Portugal) was injected locally at the intervention site, and 80 mg of ketoprofen every 8 hours in case of pain was administered after surgery; the patient was observed for 4 hours then allowed to leave the hospital. Follow-up visits were scheduled at 1, 3, and 6 days after surgery.

The following day, the patient showed a partial reduction of the swelling, with a marked decrease in the crackle on palpation, and a partial reopening of the eyelid rim (Fig. 4A).

After 3 days, it was appreciable a further reduction of the swelling, absence of crackle on palpation, and total reopening of the eyelid rim (Fig. 4B).

After 6 days, the patient showed a total resolution of emphysema; slight postoperative edema persisted (Fig. 4C). The post-extractive alveolus was healed, and the suture removal was performed: no local or systemic complications were still present.

More dental procedure such as crown preparation, endodontic therapy, oral surgery procedures such as sinus lift, CO22 laser, NO2 cryomachine, air abrasive system, and dental restorations are recognized as a cause of subcutaneous emphysema.11,12,13,14,15

This rare complication occurs mainly in patients in the 3rd and 5h decade of life after the third molar removal, particularly during mandibular extractions and right-sided treatment. The use of an air syringe, high-speed handling, or their combination has been reported in most of the cases.16,17

Kung et al. described a similar case of subcutaneous emphysema after mandibular third molar removal, with swelling, pain, and difficulty in swallowing: the air progressed to the neck, but without pneumomediastinum. In this case, the authors decided to recover the patient and perform an incision and drainage of the air by the insertion of a cannula. The symptoms improved immediately after the drainage and the patient was discharged after 6 days with a complete resolution of the conditions after 2 weeks.18 Tay et al. reported a rare case of extensive cervicofacial subcutaneous emphysema, pneumomediastinum, and pneumorrhachis following third molar extraction. In this case, the patient experienced no pain, difficulty in swallowing, or respiratory distress, but the recovery was prescribed, and supplemental oxygen was given to the patient for 3 days in association with perfusion of intravenous amoxicillin and clavulanic acid. The patient was discharged after 5 days without symptoms.6 When the mucoperiosteal flap is reflected, the tooth is excised with a standard dental handpiece, air usually only invades the spaces around the tooth but sometimes penetrates the soft tissue through the flap and it can spread laterally into the buccal space, posteriorly into the masticatory space or lingually into the sublingual and submandibular space. Air in the masticatory spaces can track superiorly, gradually involving the pterygomandibular, submasseteric, and infratemporal areas, leading to the extracoronal space of the orbit. Subcutaneous emphysema is characterized by rapid onset, rarely associated with pain or functional defects.16

The pathognomonic sign of subcutaneous emphysema is crepitus on palpation: it is fundamental to differentiate this condition by other complications, which can similarly produce swelling of the soft tissues (hemorrhage, allergic reaction, or angioedema).19,20

North and Sulman described a case of emphysema after third molar extraction with the involvement of the vocal cords, which caused a persistent dysphonia due to a massive pneumomediastinum, which caused injury to the recurrent laryngeal nerve.21 Generally, the condition resolves spontaneously without consequences for the patient. However, there are case reports in the literature, which have demonstrated that the air passage to the submandibular and parapharyngeal spaces could migrate downwards into the mediastinum: condition that could seriously compromise the patient’s health.22

Treatment is symptomatic: prophylactic antibiotic therapy, observation of the airway, and monitoring the progression of the extension of the gas are recommended. Most cases of subcutaneous emphysema usually start improving after 3-5 days and may completely solve after 7-10 days. In rare cases, hospitalization is required.17

Prevention of emphysema requires minimal mucoperiosteal flap elevation, preservation of muscle attachments, gentle retraction of mucoperiosteal flap and the use of contra-angle multiplier (1:5) handpieces, which do not use high-speed air flow when working. Patient should be also advised to avoid dangerous procedures such as self-insufflation of drugs or strong nose blowing during the convalescence period.23

Diagnosis of subcutaneous emphysema should be based on medical history and clinical examinations.

Immediate identification and early diagnosis of air emphysema are the keys to make an appropriate treatment plan. The use of contra-angles instead of air turbines during surgical extractions could avoid this complication and a prompt management of the patient could prevent severe progression to more dangerous conditions.

Subcutaneous emphysema is a rare but possible complication during third molar extraction. From the clinical point of view, it is important to carry out an early and appropriate differential diagnosis with other clinical cases that show swelling of the soft tissues. Although this situation is benignant and self-limiting, it is important to make an early recognition to avoid life-threatening conditions.

15. Liebenberg WH Crawford BJ. Subcutaneous, orbital, and mediastinal emphysema secondary to the use of an air-abrasive device. Quintessence Int 1997;28(01):31-38.