Use of Topical Ozone Therapy for Wound Healing after Transalveolar Extractions: A Miracle Alternative Therapy

Aim: To evaluate the effect of topical ozone therapy for wound healing after transalveolar extractions.

Conclusion: With the present study results, we can say that the topical ozone therapy can be used as an effective treatment modality for accelerating healing and reducing the pain after transalveolar dental extractions.

Clinical significance: Dental extraction, though routinely done procedure in the clinical setting, has various postoperative complications, pain and swelling being the most common. Hence, ozone therapy can be used as an effective topical agent to manage post-extraction pain and swelling in healthy patients without the need for excess medications.

Ozone is a natural gas molecule that is chemically composed of three oxygen atoms.

Ozone therapy is a multifaceted bio-oxidative therapy wherein the ozone is administered as a gas or dissolved in water or oil base to provide therapeutic outcomes.1

With the development of medical grade ozone, its use has been greatly increased as an adjunct to the treatment of various lesions and as a sole mode of treatment in certain specific clinical conditions. Many disease states such as long-standing non-healing ulcers,2 circulatory disorders,3 infections,4 burns, and skin lesions2 have had beneficial healing effects after application of ozone therapy.

The various therapeutic applications of topical ozone therapy can be attributed to its pharmacological actions such as microbicidal activity,3 promotion of vascularity,5 and immunostimulation.4 E.A. Fisch pioneered the use of ozone therapy in dental practice in the 1930’s, to aid in disinfection and wound healing during dental surgeries.6

A colorless gas, ozone has a striking pungent odor at room temperature, which can be detected in concentrations as low as 0.02–0.05 ppm.7Its half-life varies with temperature variation. At 20°C, it has a half-life of 40 minutes and at 0°C about 140 minutes.8

Clinically, ozone can be applied in three basic forms, such as gaseous, water, and oil, depending on the medical condition for which it is intended to be used.

Prozone (W and H, UK, Ltd.) is a new technology that produces ozone in a gaseous state for use in various dental applications. The main advantage of this is that it regulates the flow of concentration of ozone, thereby not exceeding the permitted therapeutic values.9

Ozonytron device produces an electromagnetic field to transform oxygen into ozone. It then transmits this ozone to the tissue via plasma probes at a maximum concentration of 300,000 ppm. Due to the absence of a closed circuit, it is feasible to apply ozone to places that are difficult to reach, such as extraction sockets, gingival pockets, or root canals.10

Recently, ozonated oils have been developed in liquid oils, most commonly in virgin olive oil.11

Ozone has a wide spectrum of applications due to its unique therapeutic properties. A duration of 10–20 seconds, eliminates 99% of microflora, as reported in the literature.12 It has Antimicrobial effect against bacteria,13,14 viruses,4 fungi,15 yeast, and protozoa.16 The antimicrobial activity of ozone increases in the liquid environment, especially in acidic pH.17

It also initiates the activation of the immune system by causing a great increase in the production of interferon.18 Topical ozone has anti-inflammatory by which it causes the reduction in the release of algogenic chemical mediators and hence acts as a potent analgesic.19

A study by Xiao et al.20 showed that the application of ozone decreases the wound area and also accelerates wound healing by increasing the migration of fibroblasts. Ozone improves the transportation of oxygen in the blood by raising the PO2 in tissues.21

Ahmedi et al.9 reported that ozone was more effective than normal saline in reducing the incidence of dry socket and significantly reduced pain after surgical extraction of lower third molars.

Hence, we designed this study to evaluate the efficacy of topical ozone therapy as a potential healing agent post transalveolar extractions.

A prospective study conducted on 72 patients who required surgical extractions (transalveolar extractions) and reported to the Department of Oral and Maxillofacial Surgery, AB Shetty Memorial Institute of Dental Sciences, Mangaluru.

The study was conducted after obtaining institutional ethical clearance and in accordance with the Declaration of Helsinki. Informed written consent was obtained from all patients.

Patients were included based on their willingness to participate in the study, absence of any systemic disease, any tooth indicated for open extraction, and single tooth extractions only. The patients were excluded from the study if they had any associated systemic diseases & history of allergies, pregnant patients, history of intake of oral contraceptives, patients undergoing orthodontic extractions and mentally challenged patients.

The patients were randomly divided into two groups:

All the included patients underwent the surgical procedure of open extraction. After extraction, the socket was irrigated with saline in the control group and antibiotics and analgesics were prescribed for 5 days to the patients. In the study group, the socket was filled with Ozonated oil.

Post-extraction the patients were advised to put the Ozonated oil at the extraction site three times daily for a period of 5 days. No antibiotics were prescribed in this group. Analgesics were given on SOS basis to the patients.

The patients were followed up on the 3rd and 7th day postoperatively for evaluation of wound healing. They were evaluated base on the post-extraction healing using the Healing index of Landry, Turnbull and Howley.22,23 The postoperative discomfort was evaluated using the final POSSE scale on POD7.24 Swelling was evaluated giving VAS scores to the patients. Post-extraction pain was evaluated using VAS scale for pain.25 The number of analgesic doses (if taken any) were also recorded on POD7. “The descriptive photos are shown in Figure 1.” 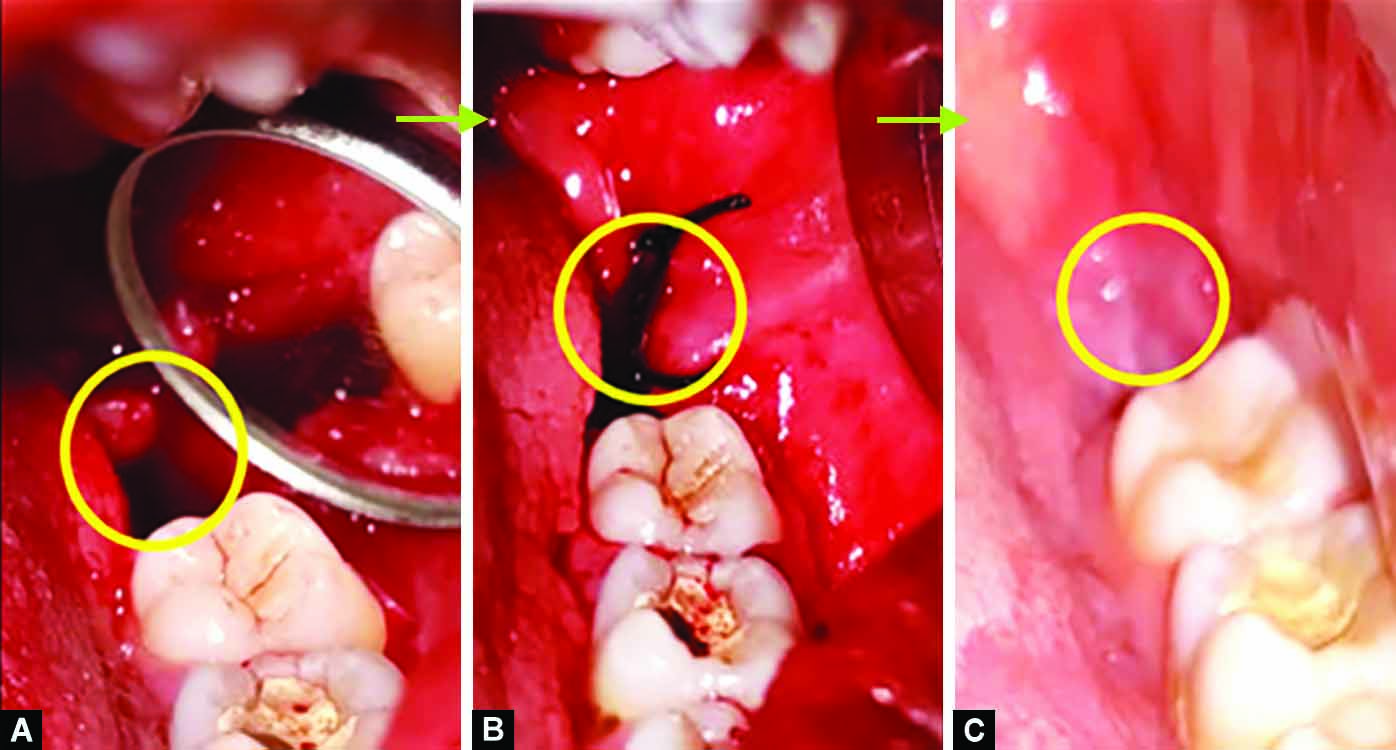 Figs 1A to C: (A) Post-extraction socket, (B) After ozone application and closure, (C) Postoperative day 7

The data was recorded and subjected to statistical analysis using Statistical Package for Social Sciences (Version 20). The mean values and standard deviations were calculated for each parameter for the study and control groups. Student’s paired t-test/Wilcoxon matched pairs was used for comparison between the study and control groups. The value for statistical difference was set at p < 0.05.

This study was a randomised control trial conducted on 72 patients who underwent transalveolar extractions. The patients were divided into two groups.

The mean age of patients in the ozone and the control group were 25.19 and 34.14 years respectively.

The total number of analgesics taken by the subjects in the ozone group and the control group were 2–4, and 8–10 tablets respectively, when assessed on POD7 (Table 2). There was statistically significant difference (p < 0.001).

Tooth extraction is a routine procedure undertaken in the dental OPD. Depending on the depth, location, and angulation of the tooth and the density of the bone, the extractions may often range from being relatively easy to extremely difficult.26 Most common complications associated with extractions are excessive pain, swelling, trismus, localized alveolar osteitis, acute osteomyelitis, infection of soft tissues, delayed healing of the socket.27 Topical ozone therapy has proved to be effective in accelerating healing post-extraction. It forms a pseudomembrane over the socket and protects it from any further physical or mechanical insults and hence reduces the post-extraction healing time.28

During the extraction procedure, the surgical trauma upregulates the biochemical mediators of inflammation and pain such as prostaglandins, bradykinin, histamine, and serotonin.29

Generally, the maximum intensity of pain is seen at 3–5 hours post-surgery, which continues for 2–3 days, and gradually diminishes by the 7th day.30,31

Application of ozone in the socket causes oxidation (inactivation) of metabolic mediators of pain, and hence it acts as a potent analgesic. On topical application, ozone forms a protective layer over the surgical site in the initial postoperative phase. This can lead to the prevention of wound contamination and also covers the exposed nerve endings, ultimately reducing the pain significantly.16 This can be justified by the lower VAS pain scores in the ozone group in our study when compared to the control group. It was statistically significant difference (p < 0.001) Figure 2. 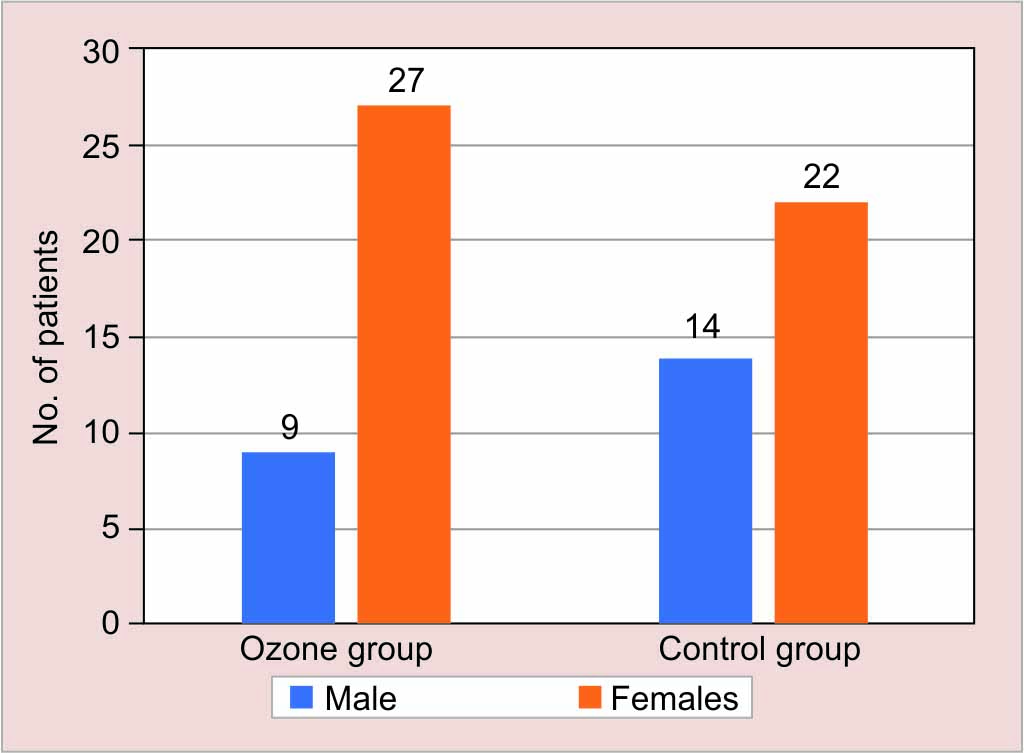 Fig. 2: Gender distribution of study subjects (Males and females distribution in the ozone and control groups)

The patients in the ozone group also took less number of analgesics postoperatively than those in the control group.

Swelling reaches peak intensity within 12–48 hours, resolving between the 5th and 7th days postoperatively.32Ozone decreases the production of mediators of the inflammation and hence can be a potential therapeutic modality for acute inflammation. Studies show that the area of inflammation or infection is acidic (positively charged), and ozone is basic (negatively charged). Hence, the chemistry of inflammation and infection attracts ozone to the area.21 In our study we see decreased swelling scores in the ozone group when compared to the control group and the difference was statistically significant (p < 0.001).

Kazancioglu et al.10 reported the successful use of ozone gas as an extra-oral agent to enhance wound healing following third molar extraction. Our study results are similar to these results as we had better-wound healing in the ozone group compared to the control group.

Side Effects of Ozone

In our study, only one patient reported of mild dislike of the taste of the ozonated oil accompanied by nausea. No other side effects were reported.

The use of ozone is contraindicated in myocardial infarction, hyperthyroidism, favism, autoimmune disorders, myasthenia, ozone allergy, and alcohol intoxication.16

Though ozone has multiple therapeutic benefits, it also has some infrequent side effects such as epiphora, rhinitis, upper respiratory irritation, headache, occasional nausea and vomiting, and cough.

In the event of an ozone intoxication, the patient must be made to lie down in a supine position, should inhale humid oxygen, and be given ascorbic acid, vitamin E, and n-acetylcysteine. As ozone has high oxidative power, care should be taken to use only ozone resistant materials such as glass, silicon, and Teflon.17

Limitations of the Study

It is a single centre study. To establish the role of ozone in effective wound healing for a larger population, a multicentric study should be conducted.

Topical ozone therapy has an extensive array of applications in dental surgery, especially due to its remarkable wound healing properties and potent anti-inflammatory and analgesic action. It can be used as an exclusive treatment modality post-dental extractions owing to its immunostimulant, bioenergetic, and biosynthetic, analgesic, antimicrobial and antioxidant, actions. Its atraumatic, non-invasive, and painless nature of the application and the relative absence of discomfort greatly increase the patient’s acceptability and compliance with the dental treatment.

Topical ozone therapy can be used as a sole treatment modality for treating patients after an extraction procedure. It may prove to be a viable alternative to postoperative antibiotics and analgesics, eliminating any systemic side effects associated with these.