Materials and methods: A total of 72 extracted mandibular premolar teeth were selected based on predetermined inclusion and exclusion criteria and randomly divided into two groups for measuring the temperature change by placing probes at coronal third, middle third, and apical third of external root surface during instrumentation with PTG and WOG, respectively. Both the groups were further subdivided into two subgroups consisting of 18 teeth each and temperature was recorded at three-thirds during thermoplasticized obturation with RTD during the Thermafil obturator system and EandQ injection system. The recorded temperature was statistically analyzed to evaluate the highest temperature rise during different procedures.

Results: The temperature rise during biomechanical preparation was higher with ProTaper Gold, at the middle third of root surface, followed by an apical and coronal third than WaveOne Gold. Among both thermoplasticized obturation, temperature rise with EandQ injectable system was highest, at apical third, followed by the middle and coronal third, than Thermafil system.

Various procedures during endodontic treatment and restoration of endodontically treated teeth like mechanical root canal preparations, obturations with high-temperature gutta-percha techniques can be associated with the rise of temperature in radicular and periodontal tissue1 which might be detrimental to the tissues around.2 However, heat transfer to the periodontium is a multifactorial process and its quantum is affected by the configuration of the root canal, the amount of remaining dentine thickness, cross-section and design of instrument used, the extent of contact between instrument and canal wall, intermittent or continuous instrument usage, number of revolution per minute and the operator force.3 During instrumentation, heat is generated along the canal walls due to variable frictional forces, also high rotational speed could increase temperature locally.4

However, the velocity of a mechanical instrument within the root canal might also create thermal stress on the outer root surface as heat is directly proportional to velocity. The heat produced during canal instrumentation has been reported in various in vitro studies done in past by Ozkocak et al. They evaluated temperature changes in the middle portion of the outer radicular surface using a non-contact type infrared thermometer.5

Heat-based obturation systems might also contribute to an increase in temperature on the external root surface and surrounding periodontal apparatus because of the higher temperature of the gutta-percha mass achieved at or around 200°C.6 Also, transfer of the heated gutta-percha to the root canal is immediate till the entire canal is filled, the transfer of heat can be more widespread and efficient, thus leading to a higher change in temperature. Extreme temperature increase above the normal body temperature (37°C) may cause any insult to the periapical or periodontal tissues. It has been observed that temperature rise above 10°C in the root canal can cause injury to periapical tissue.7

So, as to evaluate heat generation with two of the most commonly used mechanical instrumentation endodontic file systems, ProTaper Gold and WaveOne Gold and common representatives of heat-based obturation techniques Thermafil system and EandQ injection obturation system, the present study was undertaken.

This experimental ex vivo study was conducted in the Department of Conservative Dentistry and Endodontics at Teerthanker Mahaveer Dental College and Research Centre, Moradabad. The clearance for this study was acquired from the Ethical Committee of Teerthanker Mahaveer University and the study was performed in the Department of Cons. Dentistry and Endodontics, TMDC and RC, Moradabad, Uttar Pradesh.

Freshly extracted intact human mandibular premolar teeth extracted for orthodontic and periodontal reasons were collected. Teeth were cleaned of debris, tissue, and blood clots under running water and subsequently with an ultrasonic scaler and were disinfected by insertion in 3% hydrogen peroxide for 7 days stored in normal saline.

The collected teeth were clinically examined under an operating stereomicroscope (Techno Scientific Instruments, LYZER) and radiographs were taken to rule out the inclusion and exclusion criteria.

The sample size for the study was statistically decided as 72 which were divided randomly into two groups with 36 teeth in each:

Both the groups were further subdivided into two subgroups with 18 teeth in each respective subgroup.

The experimental models for recording the temperature during mechanical instrumentation and thermoplasticized obturation were prepared by placing the tooth in the modeling wax, within a 5 mL syringe, after access opening and determination of working length with #10K file radiographically. Three holes were drilled at three different levels, in the plastic syringe wall, so that probes could contact the external root surface at the coronal, middle, and apical third. The recording of temperature was done after maintaining the baseline ambient temperature at 27 ± 1°C.

Using X-Smart endo motor, ProTaper Gold rotary (PTG; Dentsply Maillefer, Ballaigues, Switzerland) files were used at 300 rpm and 150 torque (g × cm) in the root canal whereas WaveOne Gold rotary (WOG; Dentsply Maillefer, Ballaigues, Switzerland) files were used at 350 rpm in the root canal according to the manufacturer’s instructions. The three temperature probes were placed on the external root surface at the coronal, middle, and apical third which were attached to digital temperature indicators to measure temperature rise. After completion of the biomechanical preparation in both the groups, the final used file was kept running in the root canal for 60 seconds and the highest temperature change across the canal at each of the three-thirds was recorded in both the instrumentation groups.

After biomechanical preparation, samples in group I and II were further subdivided into two subgroups: A and B and were brought to room temperature to obtain the baseline temperature, following which thermoplasticized obturation was carried out with Thermafil Plus Obturation System (Dentsply Maillefer) and EandQ Master System (Meta Biomed EandQ Master Obturation System Cordless), in the respectively assigned subgroups.

In subgroup IA and IIA, specimens were obturated with Thermafil Plus Obturation System (Dentsply Maillefer). The selected Thermafil Plus gutta-percha obturator was then placed in the ThermaprepPlus oven and heated according to the manufacturer’s directions. The resistance temperature probes were placed at the level of drilled holes and the highest temperature was recorded once the heated carrier was placed till the working length.

In subgroup IB and IIB, specimens were obturated with EandQ™ Master System (Meta Biomed EandQ Master Obturation System Cordless). The temperature probes were placed in such a way that they were in contact with the coronal, middle, and apical third of the external root surface through drilled holes in the plastic syringe wall, and the tip was placed inside the root canal space of the prepared tooth without binding. The highest temperature rise was recorded, once the heated gutta-percha spread freely from the tip of the hand-held gun in the canal by keeping it 3–5 mm shorter than the working length, after preheating to 200°C. 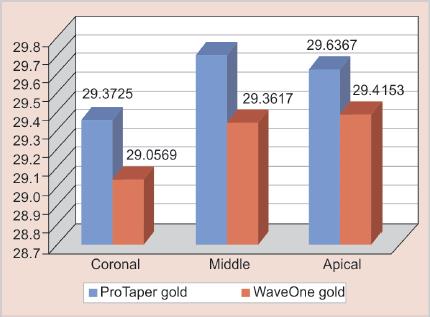 Fig. 1: Comparison of temperature rise among PTG (group I) and WOG (group II) 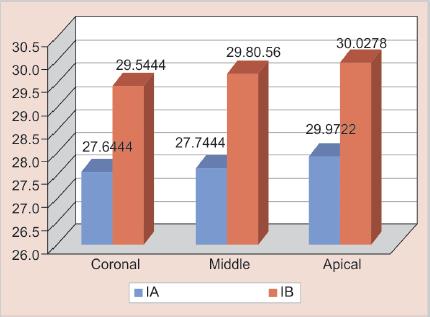 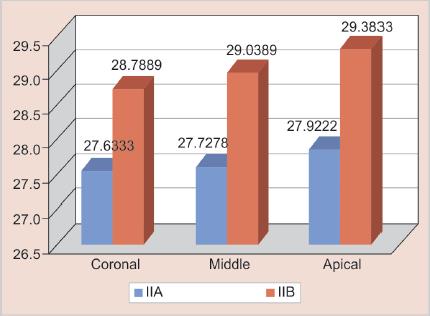 The amount of heat generated during the various endodontic procedures involving root canal preparation, warm obturation techniques using thermoplasticized gutta-percha, preparation for post-space, and its cementation can produce thermal changes on the external root surface.8 Higher temperature levels might damage the bone tissue and might cause tooth ankylosis or bone necrosis and resorption of the tooth and the surrounding supportive structure.9 With high temperatures around 56°C, the inactivation of bone alkaline phosphatase has been reported.2 It has also been assessed, that a 1-minute exposure at 53°C might result in interrupted blood flow in the bone and may result in protein denaturation when exposing the periodontal ligament to a 43°C temperature.10 However, in general, increase in 10°C is considered as the critical temperature at which damage may occur to tooth support tissues.1

In this study, to evaluate the temperature change during mechanical instrumentation and thermoplasticized obturation techniques at the coronal, middle, and apical third of the root canal, an attempt was made to simulate in vivo conditions, by using modeling wax as a medium in the experimental model. The recording of temperature change was done by using three sets of resistance temperature detector (RTD) which were in contact with the external root surface at three levels through the drilled holes after maintaining the baseline ambient temperature of 27 ± 1°C.

In the present study, during instrumentation with PTG and WOG, a higher temperature increase was seen in both the groups, at the middle third of the external root surface. However, on comparative evaluation, the temperature rise was significantly lower during reciprocating instrumentation with WOG. The reciprocation instead of the continuous rotary motion can be favorable, especially in cases with minimum dentine thickness as there is alternating contact of the cutting edges, due to variable cross-section throughout the length of the instrument which induces less stress formation on root canal dentine and thus aids in less invasive instrumentation. Further, the single-use of these file system tends to decrease the instrument fatigue and the risk of cross-contamination, when compared with the multiple numbers of files required in rotary system.11 Sarthaj et al. have shown that reciprocating instruments, tend to preserve the original anatomy of the canal, as this approach is less invasive and minimizes canal transportation risk, ledge formation, irregular apical enlargement, and incidence of canal curvature straightening.12 Patino et al. described that the reciprocation (alternating) motion reduces excessive torsional stresses which are induced during rotary instrumentation.13

During thermoplasticized obturation with Thermafil Plus Obturation System and EandQ Master Obturation System, a higher temperature increase was found in both the groups at the apical third of the external root surface. However, on comparative evaluation, the temperature rise was significantly lower during thermoplasticized obturation with Thermafil core-carrier system.

The carrier-based obturation technique is a simple method for the thermoplasticized gutta-percha delivery, in the prepared canal, as the softened gutta-percha mass adapts and easily flows into the irregularities of the root canal system. Hale et al. radiographically showed better results with the Thermafil system when compared with lateral condensation due to insufficient deeper penetration of spreaders after placement of master cone and thus prohibiting accessory cones from reaching the apical 1–3 mm during lateral condensation.14 Buchanan showed a higher percentage of the gutta-percha filled in apical third with carrier-based obturation than lateral condensation.15 Thermafil technique is considered as a gold standard technique especially in the case of double curves, narrow canals, long canals, and severe curves.9,16–18

In our study, during obturation with Thermafil core-carrier system, the temperature rise of 1.30°C was recorded above the maintained 27.0°C ambient temperature, which is in accordance with the finding of Behnia and McDonald, where they found relatively low-temperature rise with Thermafil obturation ranging from 4.26°C (mesiobuccal roots of maxillary molars) to 4.87°C (maxillary incisors).19 Deboa also found a rise in temperature of 2.1–6.1°C with the Thermafil obturation technique. Core carrier obturation technique results in gutta-percha tag formation within dentinal tubules and also overfilling is reported which can cause thermal trauma and extrusion trauma.20 Heeran and Levitan found more risk of thermal trauma due to overfilling with Thermafil and demonstrated that the likelihood of overfilling was associated with the canal tapering.21

As per our findings, it is obvious that rotary instrumentation with both PTG and WOG in reciprocating movement does not lead to a temperature change on the external root surface that could have a deleterious effect on the adjoining periapical tissue. Similarly, the use of carrier-based obturation technique or thermoplasticized gutta-percha technique does not lead to a temperature change that could result in deleterious effects on the surrounding tissue. Since it has been established in previous studies that a temperature rise <10°C on the external root surface is relatively safe and preserves the natural integrity and healthy state of the adjacent tissue.3,5,12,15,17

There are certain limitations to the present in vitro study as it has been acknowledged that surface temperature rise in vivo remains lower because of the periodontal ligament, bone, and microvasculature. In this study, only single-rooted teeth were evaluated, whereas temperature alteration may vary in a multi-rooted tooth with varying remaining dentine thickness. Also, the simultaneous use of irrigants helps in lowering the temperature.