How to cite this article Krishna G, Ravindran SK, Balu P, et al. Comparison of Sclerostin Levels in Gingival Crevicular Fluid before and after Nonsurgical Therapy in Smokers and Nonsmokers with Chronic Periodontitis. World J Dent 2021;12(5):363–366.

Aim and objective: This study aims to assess gingival crevicular fluid levels of sclerostin before and after nonsurgical periodontal therapy in smokers and nonsmokers with chronic generalized periodontitis.

Conclusion: Sclerostin levels were significantly higher in smokers when compared with nonsmokers at the baseline and exhibited persistent higher levels even after periodontal therapy in smokers.

Clinical significance: Sclerostin is an osteocyte secreted soluble antagonist of the wnt/β catenin signaling pathway which is a requisite for osteoblast development and osteogenesis. Increased sclerostin levels in smokers increase and hasten periodontal destruction. Therefore, sclerostin can be a promising therapeutic target for control of osteoclastic activity and promotion of osteogenesis in chronic periodontitis and more so in smokers.

Chronic periodontitis is a multifactorial inflammatory disease of the gingival tissues of susceptible individuals in response to bacterial plaque accumulation. The onset of this disease is initiated by microorganisms and progression.1 Bone destruction driven by the inflammatory process involves a “two-way” interaction between the inflammatory infiltrate and cells responsible for bone homeostasis. Exacerbation in the production of these inflammatory mediators results in soft tissue destruction and activation of the bone resorption mechanism.2

The regulation of bone metabolism is a complex process involving diverse signal transduction pathways both catabolic (RANK-RANKL) and anabolic (Wnt signaling) pathways.3 Regulation of Wnt signaling is mediated through post-translational modification of Wnts, receptor regulation, and antagonist binding. Sclerostin and dickkopf-1 have been identified as being endogenous antagonists of the Wnt pathway.4

Sclerostin, a product of the SOST gene, is a secreted glycoprotein that binds low-density lipoprotein receptor-related protein 5 and blocks the Wnt signaling pathway. It is secreted by cementocytes and osteocytes. Its expression, which suppresses osteoclastogenesis and reduces the viability of osteoblasts and osteocytes, leads to unbalanced bone turnover in favor of bone resorption. Considering the role of sclerostin in bone destruction, it can be speculated that this protein can influence bone destruction in periodontal diseases as well and can be a potential biomarker to assess bone destruction in periodontal diseases.5

RANK-RANKL-mediated bone destruction in periodontal diseases has been widely researched and reported. However, the endogenous antagonists like sclerostin and dickkopf proteins, of the Wnt signaling pathway have not been explored much. Only a few studies have assessed the anabolic pathway, by measuring the sclerostin levels in periodontal health and disease.

Numerous studies have assessed RANK/RANKL-mediated alveolar bone destruction, but to the best of our knowledge, no study has assessed the influence of smoking-mediated catabolic bone destruction in periodontal disease.

In lieu of the above the aim of the present study to compare and evaluate the gingival crevicular fluid levels of sclerostin before and after nonsurgical therapy in smokers and nonsmokers with chronic periodontitis.

The present study was carried out in the Department of Periodontology, Indira Gandhi Institute of Dental Sciences (IGIDS), Sri Balaji Vidyapeeth (Deemed to be University) from August 2019 to March 2020. This study was approved by Institutional Human Ethics Committee, IGIDS (IGIDSIEC2019NRP04PGGOPAI). Written informed consent was obtained from all patients before their enrolment in the study.

The sample size was calculated using standardized statistical software G Power 3.0. Considering 2.18 ± 4.16 and 5.87 ± 4.83 as mean and standard deviation from the previous study by Nurkan et al. (2009), using the formula

Sample size needed in each group is calculated as 18.

Patients diagnosed with generalized moderate/severe chronic periodontitis as per the American Academy of Periodontology (AAP) criteria 1999 were included in the study. Participants had at least two teeth with probing pocket depth ≥5 mm and clinical attachment loss ≥4 mm with bleeding on probing at the affected sites in >30% of sites were selected. Smokers were participants who had smoked 100 or more cigarettes over their lifetime and smoked at the time of the examination and nonsmokers were participants who have not smoked ≥100 cigarettes in their lifetime and do not currently smoke (according to CDC). Participants were excluded from the study if they exhibited either presence of uncontrolled systemic disease, pregnancy, history of bone remodeling drug therapy, periodontal therapy during the past 6 months, former smokers and antibiotics, etc.

GCF samples were collected by intracrevicular method as described by Mann et al. in 1963 using grade I Whatman filter paper. Samples were collected from sites with the deepest pocket depth. Samples were taken from the same sites at baseline and 1-month post-nonsurgical therapy in smokers and nonsmokers with chronic periodontitis. The selected teeth were isolated with cotton rolls and air-dried. A supragingival plaque was removed carefully with a sterile scaler. Paper strips were held using a tweezer and it was placed into the gingival crevice until mild resistance was felt and were left in position for 30 seconds. Strips contaminated with saliva or blood were discarded. Two strips from each patient were pooled to make it as one sample which was then transferred to a sterile Eppendorf tube (1.5 mL) containing 250 μL phosphate-buffered saline. All samples were immediately stored at −80°C until the day of laboratory analysis. Sclerostin levels were analyzed using an enzyme-linked immunosorbent assay (HUMAN SOST ELISA KIT).

The results of all parameters (PPD, CAL, and SOST) are presented as mean and standard deviation. Inferential analysis for intragroup was done using paired t-test and intergroup has been done using independent t-test.

The difference in tissue response between smokers and nonsmokers is reportedly due to the difference in gingival blood flow and the number of blood vessels in the marginal gingiva. An increase in gingival volume due to the increase in blood vessels seems to be less evident in smokers.13 Differences in healing are also related to impaired function of fibroblasts and PMN phagocytosis in smoking patients. All these factors collectively affect the outcome of periodontal therapy in smoking patients.14 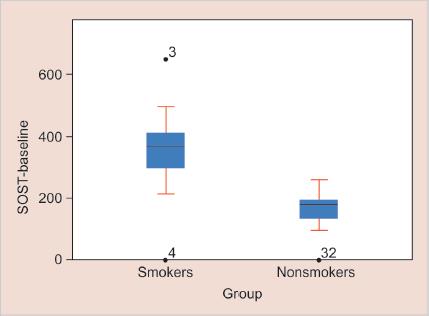 Sclerostin levels were significantly higher in smokers when compared with nonsmokers at the baseline and exhibited persistent higher levels even after periodontal therapy in smokers, suggesting the role of sclerostin as prognostic biomarkers in periodontal disease.