Aim and objective: This study provides a guideline for immediate implant placement in the anterior esthetic zone based on the observed bone morphology in the North Indian population.

Materials and methods: Cone-beam computed tomography (CBCT) images of maxillary anterior teeth of 100 patients (total sample size: 600 teeth) in the North Indian population were analyzed for their relation to the alveolus in the sagittal plane following Kan’s classification.

Conclusion: Class I is the most common sagittal root position observed in the North Indian population. This study emphasizes the importance of CBCT for predictable treatment planning in the esthetic zone.

With a high cumulative survival rate of 92–100%, immediate implant placement is a popular treatment option with both clinicians and patients.1–4 Introduced by Schulte and Heimke,5 the technique reduces treatment time and increases patient satisfaction and treatment acceptance. It has also been observed to maintain the hard and soft tissue morphology offering several surgical and restorative advantages over the traditional Branemark protocol.6–10 Boticelli et al. and Covani et al. reported significant hard-tissue alterations post-placement of implant immediately, especially in the first 4–12 weeks.11–13 Since the buccal bone is affected more by these changes, it affects the overall esthetic outcome.14–18 To further complicate the situation the buccal bone which is mostly only bundle bone resorbs quicker than the usually thick lingual plate after extraction.

Elian et al. classified varied types of extraction sockets based on bone and soft tissue anatomy.19 The presence of a thin buccal wall leads to a mean vertical bone loss of 1 mm. Multivariate analysis revealed that the thickness of the buccal bone wall was a key factor influencing horizontal bone resorption changes. The thickness of the buccal bone and implant position influences the vertical changes notably. Therefore, the root position of anterior teeth in the radial or sagittal plane plays an important role in immediate implant placement.

Dental morphology differs with geographic regions and ethnic backgrounds. Literature suggests various cephalometric and orthognathic differences amongst populations of different ethnicity. Oh et al.22 in their study on craniofacial morphology of European and Asian populations found that the inclination of the maxilla and the shape of the posterior cranial fossa were significantly different between the two ethnic groups.23 No study has been conducted to date to check the validity of Kan’s classification in the Indian subcontinent. This study aimed to check the validity and reliability of Kan’s classification on the North Indian population which would provide a guideline for immediate implant placement in the anterior esthetic zone.

This observational study included cone-beam computed tomography (CBCT) images of patients referred to the Faculty of Dental Sciences, SGT University, Delhi-NCR. The patients referred here were mostly from the adjoining states in Northern India. Forty-two male and 58 female patients between the ages of 20 years and 60 years (mean age: 40 years) were selected. Only patients having all six maxillary anterior teeth intact with no sign of infection, root resorption, fracture, internal resorption, or any other trauma and at least two occluding posterior teeth in each quadrant were included. The research work was distributed among the authors at various levels. Two authors were solely involved in the authenticity of data collection and quality of CBCT scans.

The assessment of CBCT scans was done by a single examiner to avoid inter-operator bias. In every study subject, the sagittal root position of central incisors, lateral incisors, and canines in relation to the alveolar bone was evaluated using CBCT images. In the axial plane, the center of the arch form was marked using the arch form selector tool of the CS-3D imaging software. The images were reoriented so that the selected tooth was positioned such that the cross-sectional image showed a maximum thickness of pulp, at the midpoint of the tooth parallel to its long axis. The tooth was evaluated for the relation of the tooth root to the alveolar bone following Kan’s sagittal root position (SRP), classification (Fig. 1):

Kan et al. demonstrated the significance of CBCT as an adjunct to implant treatment planning. The specific treatment protocols for each class are discussed later. The number and percentage of each class of SRP according to the tooth position in the anterior maxilla were recorded using descriptive statistics. 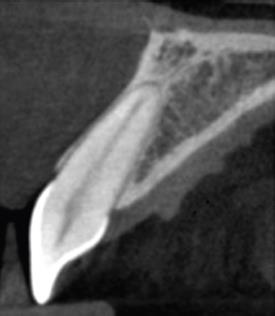 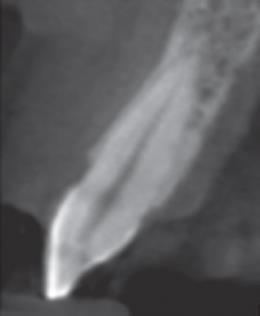 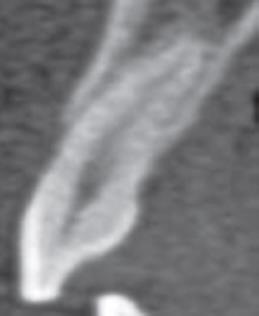 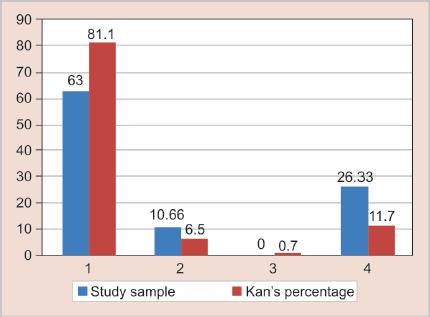 Fig. 5: Comparison of the incidence rate of sagittal root position observed in North Indian population and percentage as reported in Kan’s SRP classification21

Rehabilitation of the peri-implant soft and hard tissues in the anterior esthetic zone has been a huge challenge in implant dentistry. Multiple esthetic challenges are observed including horizontal loss of facial contours and vertical recession in the interdental or mid-facial area. It has been deemed mandatory to assess several anatomical structures before single tooth extraction and immediate implant placement procedures are planned in the esthetic zone. These include the width and height of the facial bone, the dimensions of the palatal bone wall, the crest width mesially and distally to the extraction site—measured 3 mm apical to the CEJ of neighboring teeth, an inclination of the alveolar ridge, periodontal health of the adjacent teeth, the dimensions of the naso-palatal canal, the volume of bone beyond the apex of the root, and the proportions of the tooth being extracted.24 Assessment of the presence of pathology in form of an acute infection is also important. The use of a CBCT before extraction, therefore, becomes crucial in achieving a predictable result.

Immediate implants reduce the duration of both the surgical procedure and rehabilitation and optimize esthetic outcomes.25 The increasing patient demand for an instant restoration procedure especially for the esthetic zone requires precise treatment planning for which the anterior bone width is a major factor. Koh et al. observed a strong correlation between labial bone thickness <2 mm and horizontal bone loss.26 Ferrus et al., in a clinical study of immediate implant placement and provisionalization (IIPP) at the maxillary premolar segments, reported that the percentage reduction of the horizontal dimension was significantly greater at thin labial wall sites than at thick wall sites (43 vs 21%).27 Yang et al., in their study, found some change in horizontal and vertical bone alternations between the 0.5 mm and 1 mm group and the ≥1 mm group.28 Therefore, measurement of labial bone thickness has been proved to be vital to the prognosis of immediate implant placement in the anterior maxilla. The classification system proposed by Gluckman also presented a useful tool to time and position an immediate implant.21

As per Kan’s classification, with the entire length of the root in close proximity of the labial cortical plate, the bulk of bone is present on the palatal side in Class I SRP. Engaging this palatal bone on immediate implant placement provides sufficient jumping distance on the labial side for maintenance of both hard and soft tissue contours for esthetic results in most cases. As per our collected data, 63% of the root position was of this classification. Class I being the most common position allows immediate implant placement with favorable esthetic results and often can be combined with immediate loading.

While planning a treatment option for Class II SRP, sufficient bone at the apex of the extraction socket is needed for achieving primary stability. In 10.6% of our study sample, the tooth root was observed in the middle of the alveolus, ensuring both labial and palatal bone volume but without adequate vertical bone availability, immediate implant placement will not lead to esthetic results. In the absence of suitable dimensions, it is preferable to preserve the socket. In these situations, it is desirable to appraise the patient in the initial appointments regarding the extra procedure and cost involved in grafting. The treating dentist should also ensure the availability of an adequate armamentarium for such procedures. Also, socket shield techniques may be employed in such situations.

Class III SRP poses a massive challenge in the esthetic rehabilitation of the anterior esthetic zone. Since the tooth root engages the palatal bone only, the labial bone is free for implant stability. The anatomical variations in the pre-maxillary often lead to fenestrations in the labial cortical plate. In this study sample of the North Indian population, this sagittal root position was not observed. Though if this situation is observed, implant placement may be done with a simultaneous augmentation procedure.

A substantial percentage, 26.33% of the study sample showed Class IV root position. Post-extraction the alveolar socket has a very thin, if any, buccal and palatal bone available. The only treatment option to achieve predictable results in such a situation is socket preservation. The grafting of such a socket conserves the hard and soft tissue contours. Implant placement should only be done after adequate host tissue is formed for a successful treatment.

The study is limited to only the North Indian population. For further detailing of morphological variations observed in the Indian population, a study with larger sample size and more community diversification is needed.

This study emphasizes the importance of CBCT for predictable treatment planning in the esthetic zone. Cross-sectional images of anterior teeth before planning an immediate implant are a must to assess the root length and morphology and make evidence-based decisions, keeping in mind that Class I and Class IV are the most commonly found sagittal root positions in the North Indian population.

All procedures followed were in accordance with the ethical standards of the responsible committee on human experimentation (institutional and national) and with the Helsinki Declaration of 1975 as revised in 2008. Informed consent was obtained from all patients for being included in the study. The study does not disclose any information by means of which any individual can be identified.