Materials and methods: Thirty extracted mandibular molars were selected. After access cavity preparation of each molar, artificial perforation was made directly in the center of the pulp chamber floor. The teeth were randomly divided into three groups (N = 10) according to the used root repair material (RRM). The perforation sites were repaired with MTA (G1), ERRM (G2), and GIC (G3). The access opening of the teeth in all groups was filled with composite. Then, all teeth were immersed in 2% methylene blue for 24 hours and sectioned longitudinally to evaluate the maximum apical extent of dye leakage. Data were collected and analyzed statistically using ANOVA, Bonferroni, Kruskal–Wallis, and Mann–Whitney tests (p = 0.05).

Results: The less mean value of dye penetration was observed with MTA followed by ERRM and GIC. There was a significant difference among RRMs in relation to dye penetration. Both MTA and ERRM were significantly better than GIC in sealing the perforation site.

Conclusion: Mineral trioxide aggregate and ERRM showed a similar dye microleakage and had a better sealing ability when compared to GIC in this in vitro study.

Clinical significance: This current study showed the sealing ability of MTA, ERRM, and GIC while using to seal the furcal perforation during root canal treatment.

Perforations may happen during root canal treatment and cause complications for its completion.1 Root perforation is an artificial communication between the root canal system to the surrounding tissues of the tooth or the oral cavity.2 It may be located in a coronal, middle, or apical third of the root, and in the furcation area of a multi-rooted tooth.3 Pulp chamber perforation is an accidental procedure that occurs during the primary stage of endodontic treatment when the operator is searching for a pulp chamber or canal orifices. It results in loss of integrity of pulp chamber floor and adjacent periodontium,4,5 It has been reported that root perforation is considered to be the second greatest cause of endodontic failure.6

The prognosis of perforation depends on the prevention and treatment of bacterial infection at the perforation site. In addition, the use of non-irritating material that seals the perforation will limit epithelial breakdown and subsequent periodontal defects.5 Many materials have been used in managing perforations including amalgam, zinc oxide eugenol, cavit, calcium hydroxide, gutta perch, composite resin, glass ionomer cement (GIC), resin-modified glass ionomer, hydroxyapatite, freeze-dried bone, and tricalcium phosphate.3,7–9 In recent decades, it has been suggested to use tricalcium silicate-based materials as mineral trioxide aggregate (MTA),5,10,11 portland cement,5 and Endosequence®.12,13

Mineral trioxide aggregate has several advantages over other materials while being used for perforation repair. This material seals well even in a wet environment with the presence of blood.14 It is very biocompatible, rarely provoking any response from the periradicular tissues,15,16 after placement of MTA a cementum-like material has been consistently shown to grow directly on this material.17,18 Mineral trioxide aggregate has also been shown to have a high degree of clinically favorable long-term outcomes when used as a perforation repair material.19,20

EndoSequence root repair material (ERRM) is a ready-to-use, premixed, bioceramic paste developed for permanent root canal repair and surgical applications. It is an insoluble, radiopaque, and aluminum-free material based on a calcium silicate composition, which requires the presence of water to set and harden.13 This material is composed of calcium silicates, zirconium oxide, tantalum pentoxide, calcium phosphate monobasic, and filler agents.13,21 Some in vitro studies support ERRM to use as root repair material (RRM) due to its biocompatibility and adherence to dentin.12,22,23

The purpose of this study was to evaluate the sealing ability of ERRM, MTA, and GIC in the repair of furcal perforation using the dye microleakage method.

Thirty human freshly extracted mandibular permanent molars were selected in this in vitro study. All molars selected were extracted because of periodontal factors and had sound crowns without caries, restoration, or cracks, and with non-fused and completely formed roots. This work was done in full accordance with the World Medical Association Declaration of Helsinki with approval from the ethics committee in the university.

Calculus and soft tissue tags were removed by ultrasonic scaling, and the teeth were kept in 0.5% chloramine T for 7 days then in normal saline until the next step. After access cavity preparation of each molar, the crown was sectioned till the roof of the pulp chamber and the apical one-third of the roots were sectioned using straight fissure carbide bur (Komet, Gebr. Brasseler GmbH and Co. KG, Germany). The root canal orifices in each selected tooth and the terminus of sectioned roots were sealed using sticky wax. Artificial perforation of 2 mm in diameter was made directly in the center of the pulp chamber floor using a 2 mm width round bur in a high-speed handpiece with water coolant. The area was then flushed with water and dried with compressed air (Fig. 1).

The teeth were randomly divided into three groups according to the used RRMs.

Group I: Ten molars, in which perforations were sealed with white MTA (ProRoot MTA, Dentsply Tulsa, Tulsa, OK, USA). In this group, the powder was mixed on a paper pad with distilled water in a 3:1 powder water ratio. When the mixture exhibited putty-like consistency after about 30 seconds of mixing time, it was immediately placed into the perforation with a carrier gun. Endodontic pluggers followed by a wet cotton pellet were used to condense the material gently into the perforation site. A wet cotton pellet was placed in the pulp chamber for 4 hours.

Group II: Ten molars, in which perforations were repaired with ERRM (Brasseler, Savannah, GA, USA). This material is a ready-to-use, premixed paste so no mixing is required, The setting reaction begins as soon as the material is placed in contact with a moist environment. The working time is >30 minutes. The paste was placed in the site of perforation and condensed with pluggers and finally, a wet cotton pellet was placed in the pulp chamber for 4 hours to confirm the setting of the material. 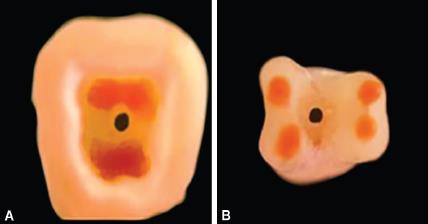 Group III: Ten molars, in which perforations were sealed with GIC (Fuji II, GC Corporation, Tokyo, Japan). In this group, the mixture was placed at the site of perforation and condensed with a plugger.

The access opening of the teeth in all groups was filled with light-cure composite (Filtek Z250, 3M-ESPE, St Paul, MN, USA). After 24 hours, the teeth surfaces were coated with two layers of clear nail varnish leaving 1–2 mm around the perforation site exposed. Then, all teeth were immersed in 2% methylene blue in 100% humidity at 37°C for 24 hours. The teeth were rinsed under running water and allowed to dry at room temperature for 24 hours. Each tooth was sectioned longitudinally in a buccolingual direction and crossing the perforation site with a diamond disk (0.3 mm in thickness) using a low-speed handpiece with water coolant, and the maximum apical extent of dye leakage at the interfacial surface between tooth structure and repair material was measured using a stereomicroscope at 40× magnification (Fig. 2).

To evaluate the sealing ability of RRMs in this in vitro study, we used mean values of apical dye leakage at perforation site and Escobar’s criteria24 which used to evaluate the infiltration proportions:

All experimental groups in this study demonstrated dye leakage at the perforation site. The extent of dye penetration in millimeters, the means, and the standard deviations for each group are listed in Table 1 and Figure 3.

The scores for apical dye penetration evaluation by Escobar’s criteria are shown in Table 2 and Figure 4.

The less mean value of dye penetration was observed with the MTA group (0.87 mm) followed by the ERRM group (0.99 mm) and the GIC group (2.17 mm). There was a significant difference among RRMs in relation to dye penetration (p = 0.011). The result of the ANOVA test to evaluate the relationship between RRM and dye penetration is presented in Table 3.

This study revealed that there was no significant difference between the MTA group and ERRM group (p > 0.05) while both MTA and ERRM were significantly better than GIC in sealing the perforation site (p %3C; 0.05). The detailed results of the Bonferroni test to evaluate the relationship between each RRM and another in sealing the perforation site are presented in Table 4.

The top frequency of loss infiltration was found in MTA and ERRM groups (8) and the less frequency was found in the GIC group (1). GIC group had the top frequency of simple infiltration (8). According to Kruskal–Wallis test, there was a significant difference among RRMs in relation to dye penetration according to Escobar’s criteria (p = 0.003). And according to Mann–Whitney test, there was no significant difference between the MTA group and the ERRM group (p %3E; 0.05), while both MTA and ERRM were significantly better than GIC as RRM (p < 0.05). 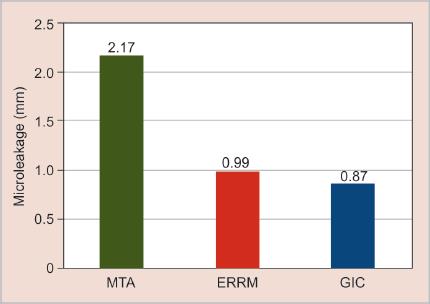 Root perforations can occur pathologically as a result of resorption and caries or iatrogenically during root canal treatment. Such perforations might compromise the treatment outcome and persist as a significant complication if not repaired because the subsequent loss of attachment and bacterial infiltration. Perforations should be managed as quickly as possible with a biocompatible repair material to prevent subsequent damage as a chronic inflammatory reaction of the periodontium due to bacterial contamination.25

An ideal perforation repair material should be biocompatible, non-toxic, non-absorbable, provide an adequate seal, not affected by blood contamination, easy in manipulation and placement, radiopaque, bacteriostatic, induce bone formation, cementogenesis and healing.26,27 Mineral trioxide aggregate material has shown a high success rate of healing after using as a repair material for furcation perforations, It may be due to long setting time (3 hours) which reduces the shrinkage of the material after setting. In addition, the sealing ability of MTA is unaffected when applied in a wet environment since this material is essentially composed of hydrophilic particles.28 Despite the desirable properties of MTA, it has many clinical shortcomings such as difficult manipulation and potential discoloration of tooth structure. So new calcium-silicate-based materials have been formulated as Biodentine® or ERRM in an attempt to enhance the properties of this material and to overcome its drawbacks.29

Most previous studies used mandibular first molar (MFM) since the anatomy of MFM is less abnormal than mandibular second and third molar. In addition, the pulp chamber and canal orifices of the mandibular second and third molar generally are not as large as those of the first molar. These teeth may have one, two, three, or four root canals while MFM in most cases has two roots and a clear and wide furcal area.4,5,11

Mineral trioxide aggregate and ERRM showed a similar dye microleakage and had a better sealing ability when compared to GIC in this in vitro study.

This current study show the sealing ability of MTA, ERRM, and GIC while using in furcal perforation during root canal treatment.