Materials and methods: Forty histopathologically confirmed cases of OL and OSCC were taken. Sections of 4 microns thickness were taken from each paraffin block and stained with 1% standard toluidine blue stain for demonstrating MCs. Counting of MCs was done by 3 observers using a 10× eyepiece fitted with 1 cm2 graticule and 40× objectives in 10 different fields in each slide.

Results: It was found that the MC count was higher in OSCC than OL and control group and the difference was found to be statistically significant. (One way Analysis of Variance test) Also, the MC count increased from mild to severe dysplasia in OL patients, as well as from well to poorly differentiated grades in OSCC patients (p < 0.01).

Mast cells (also called as labrocytes or mastocytes) are large connective tissue cells. They are usually present near the capillaries and contain numerous basophilic granules in their cytoplasm, because of which the nucleus may be obscured. MC was discovered first by Paul Ehrlich in 1878 and he used the word “Mastzellen” to illustrate these cells which is a German term referring to “a well fed cell”. Ehrlich had shown the relation of MCs with inflammation, blood vessels and with neural tissue. Thus, MCs are at present known as strong effector cells of the immune system.1,2

MCs with approximately 12 μ diameter are of varied shapes (round, spindle or oval) and are crowded with 50–100 granules. Normally the life span of MC is weeks to months. MC discharge preformed mediators such as histamine, tryptase, heparin, lipid derived mediators [leukotrienes B4 (LTB4), LTC4, LTD4 and LTE4], mitogenic cytokines (IL-3 and IL-5), prion ß inflammatory cytokines (IL-1 and TNF-alpha) and immunomodulatory cytokines (IL-4 and IL-10).3

MCs by release of their mediators can have a considerable role in transformation of OL into invasive OSCC. Previous literature shown that the enhanced MC accumulation is related to poor prognosis in a variety of tumors and thereby demonstrating a biological role of MCs in progression of tumors.4

The study was conducted in the oral pathology department at SMBT dental college, Sangamner. The patients were selected from the OPD of the department. Firstly, the patients clinically having leukoplakia and malignant ulcer were taken and their histopathological study was done using H and E staining after doing biopsy of the lesional site.

Secondly, out of these, forty histopathologically confirmed cases each of OL (showing epithelial dysplasia) and OSCC (showing invasion of tumor cells into connective tissue) were taken. Ten tissues were taken as controls which were removed during third molar extractions or they were gingival tissues obtained after mobile tooth extractions. The cases of OL were classified into hyperkeratosis with mild dysplasia, moderate dysplasia and severe dysplasia according to histopathological findings. Also OSCC were histopathologically classified into WD, MD and PD.

The section of 4–6 microns thickness taken from each paraffin block and stained with 1% standard toluidine blue stain for demonstrating MCs. MC counting was done using a 10× eyepiece fitted with 1 cm2 graticule and 40× objectives in 10 different fields in each slide. The MC counting was done by three different observers and the mean of 3 observations were taken. The MCs were seen as purple cells with irregular outline, central placed nucleus and granular cytoplasm in toluidine blue stain (Figs 1 and 2).

The presented study consisted of 40 patients with OL in clinical diagnosis and histologically showing epithelial dysplasia. Also 40 patients of OSCC on clinical diagnosis and which were histopathologically confirmed. In OL, the patients were in the age range of 32–67 years, while in OSCC patients the age range was from 39 to 71 years. In the present study, the most common site of OL was found to be buccal mucosa, followed by tongue. In OSCC, the most common site was found gingiva, followed by lips. On clinical diagnosis, homogeneous OL was found more common than non-homogeneous OL and in non-homogeneous type, speckled OL showed higher grades of dysplasia in histopathology.

Also the MC count was compared in-between epithelial dysplasia groups by means of Tukey’s test and shown a highly significant variation among mild to moderate, moderate to severe and mild to severe dysplasia in OL patients (p < 0.01).

Also, MC count was compared between grades of OSCC and found a highly significant difference from WD to MD, MD to PD and WD to PD OSCC (Tukey’s test, p < 0.01) (Tables 4 and 5).

Thus it shows that there was increase in the count of MCs as increase in dysplasia grade in OL patients and also MC count increased from WD to PD OSCC patients.

For the observation and study of MCs in histological sections various techniques were used, such as alcian blue with safranin, toluidine blue and immunohistochemistry.5 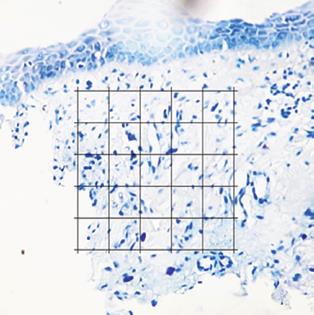 Fig. 1: MCs in the connective tissue in patients of OL (Toluidine blue stain, 40×) 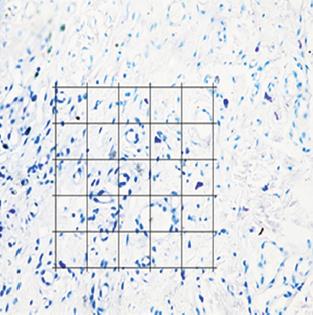 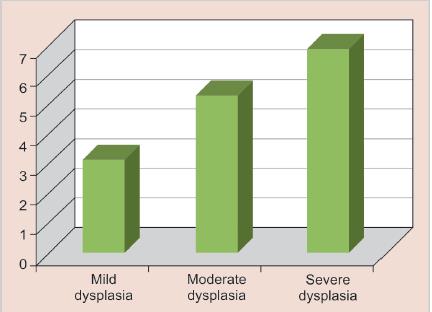 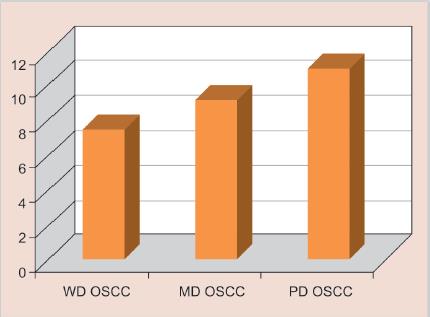 In the present study, toluidine blue was used and on staining with this metachromatic dye, the MCs visual detection become clear and secretory granules of MCs shows peculiar metachromatic staining pattern. Thus this can be more reliable technique for the same.6-8 In the current study, the accuracy of this methods was also strengthened by the insignificant interobserver variation.

MCs are present normally in the connective tissue. In general, in the skin and oral mucosa MCs are located near to the blood vessels. MCs are known to release potent mediators exerting their influence on the tissues and thereby play an important role in both oral physiologic and pathologic conditions. In lichen planus of oral cavity, MCs thought to be involved in T-lymphocytes recruitment to the sub-epithelial zone. While, in oral submucous fibrosis, MCs through release of interleukin-1, causes augmented fibroblastic reaction.9

The tumor microenvironment alteration produce changes in MC migration, distribution in tissue and its activation. Tumor induced cytokines and chemoattractants control migration and maturation of the MC progenitors. The stem cell factor induced by cancer cells along with their receptor c-kit characterizes for the most potent and significant MC chemotaxis and migration.10

The mediators from the MC acts at different steps of angiogenesis like migration and proliferation of endothelial cells, synthesis of new vessels and mobilization of pericytes. Also MC indirectly act by activation of MMPs, which degrades the extracellular matrix (ECM).10,11

On the other side, few researchers also discovered the anti-tumor activities of MC like cytotoxic functions and release of anti-cancer compounds.11

The present study shows that there was increased MC count from control to OL and from OL to OSCC patients. The results of current study were similar to the results by Ankle et al.,7 Iamaroon et al.12 and Michailidou et al.,6 Rakesh et al.4 and Biviji et al.13 Also opposite results of decrease of MC counts in oral dysplasia as compared to normal tissue was also recorded in study by Jandinski et al.14

In study by Rakesh et al.,4 total and degranulated mean MC count was observed to be higher in OL (subepithelial, intermediate and deeper zones) as compared to normal buccal mucosa.

The MCs present in the periphery of the tumor which is now confirmed by several investigators was reported first by Westple et al. in 1981.7,17

MCs were found at areas of intense vascularization (called as “hot spots”), near areas of new capillary development and around the tumor margins. Recent literature suggests that the gathering of MCs in sites of the tumor margins and release of potent pro-angiogenic and angiogenic factors may symbolize a tumor-host interaction which perhaps favors tumor progression.18-20

The study was done in different grades of epithelial dysplasia in OL and different grades of OSCC patients and in each category small sample size was there. Also the sample size was still more less in the severe dysplasia grade in OL patients and PD grade in OSCC patients. Also, in the present study, only OL was taken from the premalignant lesions and conditions. Therefore, in future such type of studies including large number of patients with different premalignant lesions and conditions is needed.

MC count was found to be increased from control to OL and from OL to OSCC. Also, there was increase in MC count as the increase in histopathological grade of dysplasia in OL and increasing grades in OSCC patients. Our observations indicate that MCs through release of variety of mediators have regulatory function on angiogenesis and inflammation may facilitate the transformation of OL into invasive OSCC.