Aim: This study aimed to compare between patient’s and clinician’s interpretations of dental occlusion in eccentric mandibular positions when T-Scan III was used as a standard device.

Materials and methods: Forty-three participants were trained to slide their jaw to the eccentric mandibular positions (right excursion, left excursion, and protrusion). The eccentric positions were determined at the edge-to-edge contact of anterior teeth in protrusion, the edge-to-edge contact opposing canines, and/or contact of buccal cusps of the opposing premolars in the working position. Contacting pairs of teeth were recorded based on the patient’s perception, clinician’s interpretation using traditional occlusal indicators, and a digital occlusal indicator; T-Scan III. Weighted kappa was used to determine the correlation of dental occlusion obtained from the patient’s perception and clinician’s interpretation compared to T-Scan III.

Conclusion: In a clinical situation, the interpretation of dental occlusion in eccentric mandibular positions acquired from a clinician is more dependable than information from patients.

Clinical significance: Dental occlusion evaluated by a clinician is more compatible with T-Scan III than that by patients.

Clinically, the dental occlusion is routinely evaluated by both clinical examination and patient’s perception.1 Patient’s interpretation or perception comes from sensory afferent outputs from proprioceptors.2-4 Several investigators found that both vital teeth and pulpless teeth have a similar sensory response because they have the same periodontal mechanoreceptors (PMRs), not the sensory receptor from the pulp. This information indicated that PMRs which are essential in the perception of dental occlusion exist in both vital and non-vital teeth.2,4-6 They are located in the periodontal ligament (PDL) area and signal afferent outflow in response to the occlusal force when PDL is stretched.7-9

Occlusal indicators are conventionally used to examine occlusal contacts of opposing dentition. They are based on the coated ink marks of articulating papers on the tooth surface, removal force of shimstock foil, and perforation of occlusal indicator wax.1 These conventional techniques are straightforward but the outcomes vary due to the limited ability of waxes and color-coated paper to detect occlusal contact, clinician’s experience, and the patient factors. To control these variations, computerized occlusal contact identifiers such as T-Scan have been advocated.

T-Scan III (Tekscan®, Boston, MA, USA) is an example of the digital occlusal indicator.10,11 It can display dental occlusion as quantitative data in static and dynamic features.10-12 With the advantages of the quantitative information, T-Scan III is used in various fields in dentistry that require high accuracy.13,14 Although T-Scan III shows superior accuracy than the conventional techniques (i.e., using articulating paper or waxes), it is not routinely used in a clinical setting because of the high operating cost. Thus, the combined interpretation of dental occlusion achieved from patients and clinicians is still the key factor.

A previous study reported the association between T-Scan III and the correlation of bite force interpretation from patients and clinicians in maximal intercuspal position (MIP). Results showed that the bite force interpretation from the clinician is more clinically reliable than the patient’s interpretation.15 Currently, a study of dental occlusion in eccentric mandibular positions has not been investigated. Therefore, this study aimed to compare the interpretation of dental occlusion between patients and a clinician in eccentric mandibular positions when T-Scan III was served as a standard device.

Naresuan University Ethical Committee approved the study protocol with an IRB No. 0995/60 before data gathering. The undergraduate dental students at Naresuan University (Phitsanulok, Thailand) participated in this study because they have clinical experience, understand tooth contact patterns (i.e., mandibular posture), and no communication problem during data collection.

Sample size justification was calculated using GPower 3.1®. The total sample would be 100 for three independent variables (patient’s perception, clinician examination, and T-Scan III analysis). To compensate for the sample loss (approximately 10–20%), the total sample size would be 110 to 120. The dental occlusion of each participant was required to be examined by all three independent variables. Therefore, the sample size of the current study was set to have at least 40 samples (n = 40). Finally, 43 participants took part in this study following the inclusion and exclusion criteria as follows:

Two appointments were desired for each participant. For the first appointment, alginate impressions were made, and the mesiodistal width of teeth was measured from the study models to set the T-Scan III program. Then, an occlusion specialized dentist (Jittima Pumklin; JP) examined the dental occlusion using articulating papers (Hanel®, Langenau, Germany) and shimstock foils (Hanel®, Langenau, Germany) to test intra-examiner reliability.

The second appointment was done a week later. Evaluation of dental occlusion was acquired by means of patient’s perception of their tooth contacts, a clinical examination from the clinician (JP), and T-Scan III analysis. Firstly, participants were asked to bite on MIP and move the mandible to eccentric mandibular positions (right excursion, left excursion, and protrusion). Then, patients reported contacting teeth through their index fingers. Each recording position was performed in triplicate. Secondly, JP evaluated and clarified contacting teeth during eccentric mandibular position using articulating papers (Hanel®, Langenau, Germany) and shimstock foils (Hanel®, Langenau, Germany). Lastly, T-Scan III data were collected by asking participants to bite on the T-Scan III HD sensor at the recording positions. The contacting teeth (blue mark) were shown in the tooth diagram (Fig. 1). T-Scan III analysis was also repeated three times.

The contacting teeth during the eccentric mandibular positions were recorded and classified as “anterior”, “posterior”, or “anterior and posterior” for the right and left excursions. The recording data were classified as “right”, “left”, or “right and left” for the protrusion. These data indicated which part/side of the jaws guided the eccentric movement regardless of the number of tooth contacts.

Weighted kappa analysis revealed that the protrusion had the best agreement (highest kappa score) with T-Scan III among three eccentric movements in both patient and clinician interpretation (substantial agreement; κω = 0.661 for the patient and κω = 0.772 for the clinician).

Although the digital occlusal indicators offer superiority over the traditional occlusal indicators, the high cost of the equipment is the main reason why they are not widely used. Currently, patients and clinicians are still the keys to detect dental occlusion. A previous study showed that the bite force interpretation in MIP from clinicians is more clinically reliable than patients.15 No study has ever assessed the interpretation of the dental occlusion in an eccentric position. 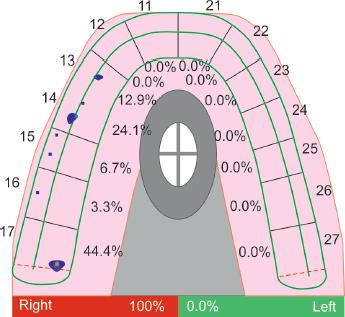 This is the first study to have evaluated the dental occlusion interpretation between patients and a clinician in eccentric mandibular positions. The results showed that the highest agreement (substantial agreement) with T-Scan III was protrusion for both patient recognition and clinician interpretation/examination, followed by moderate agreement on the left and right excursions, respectively. Even though both patient recognition and clinician interpretation had the same agreement with T-Scan III, clinician interpretation showed a higher percent of subject agreement than patient’s perception. This finding is possibly due to the inability of patients to discriminate the light contact between the opposing teeth. Siirilä and Laine found that humans can discriminate approximately 8–10 μm of foreign bodies.17 Their results suggested that humans cannot detect tooth contacts that are %3C;8–10 μm. On the other hand, if the interocclusal space between the occluding teeth is %3E;8–10 μm, humans can pinpoint the contacting pairs of teeth or identify which side of jaws contacts heavier.

In protrusion, incisors guided the protrusive movement as the incisal edges of mandibular incisors moved along the lingually inclined planes of maxillary incisors.18 The contacting teeth in protrusion are often located on anterior teeth. Anterior teeth have highly sensitive PMRs to force magnitudes than the posterior teeth have.5,8,19 Additionally, studies reported that the most sensitive area to bite force perception is at incisor, canine, and premolar regions, respectively.20,21 Johnsen et al. compared the periodontal afferents from the different areas of the dental arch by peanut holding. They found that the more distal part of the dental arch, the more bite force generated. Their finding supported the high sensitivity of PMRs in the anterior teeth, rather than the posterior teeth.20 Therefore, in the current study, the highest agreement with T-Scan III in protrusion compared to other movements can be explained by the highly sensitive PMRs in the anterior region resulting in an increased ability of participants to identify tooth contacts in the anterior teeth than the posterior teeth.

In lateral excursion, the mandible was guided to move away from MIP along the palatal inclined plane of maxillary canine and/or palatal inclined planes of buccal cusps of maxillary posterior teeth.22,23 Several investigators reported that the most common lateral excursive pattern in young adults is a group function occlusion.24-27 In this study, posterior teeth (not the canine) which had poorer PMRs than the anterior teeth20 were mainly guided the mandible during the lateral excursion. Therefore, the similar correlation between left and right excursion (moderate agreement), and the lower correlation to T-Scan III than protrusion (a substantial agreement, guided by anterior teeth) may be explained by the poorer PMRs in the posterior segment of the jaw. Moreover, locating the contacting teeth in the posterior segment of the jaw is more difficult than the anterior region (i.e., in protrusion) because they are on the side of the jaw which is not easily seen with the patient’s eyes, and contacting teeth are usually obscured by the surrounding tissue (i.e., cheek).

For the standard device, the T-Scan III system was used in this study because this system can report quantitative data, whereas traditional occlusal indicators cannot. Additionally, the HD sensor of T-Scan III can be used up to 20 times, and data from the first 20 repeated bites were consistent and reliable.28 More importantly, the main advantage of T-Scan III is the elimination of several variabilities such as material properties and clinician’s experience.29,30 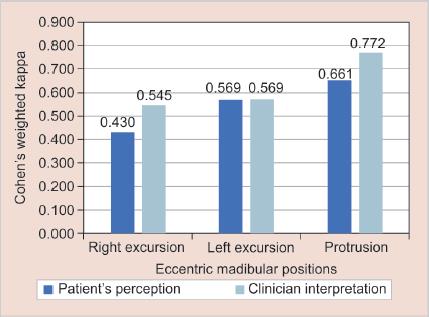 Even though studies endorsed the benefits of T-Scan III in terms of high accuracy and reliability,10,28,31 the 100-μm thick of the HD sensor was approximately 4–12 fold greater than the physiologic axial tooth movement.32 Consequently, it may affect patient’s bite and cause bite deviation. To minimize these problems, dental students who can practically be trained to bite at MIP and perform jaw movement at different positions were recruited for the study. They were trained to bite on the desired position before data collection. Moreover, the U-shaped HD sensor had a uniform thickness. Therefore, all occluding teeth can simultaneously contact on both sides and the errors resulting from the thickness of the HD sensor were minimized.11 Additionally, the data collection was done three times and reported in consensus.

Even if clinical examination using traditional occlusal indicators may be the most convenient method to examine dental occlusion, no previous research assured the validity of clinician interpretation of dental occlusion in eccentric mandibular positions. Kerstein and Radke investigated the validity of dental occlusion examination evaluated by the clinician using articulating paper marks in relation to T-Scan III analysis. They found that dentists cannot determine the relative bite force effectively.33 In this study, clinician reliability testing (kappa score) revealed moderate to an almost perfect agreement even with traditional occlusal indicators. This finding maybe because of the restricted properties of the traditional occlusal indicators1 and the clinical experience of the examiner.

This is the first study to have evaluated the reliability of patient and clinician interpretation in an examination of dental occlusion in eccentric positions compared to the digital occlusal analyzer known as T-Scan III. The highest agreement with T-Scan III was protrusion followed by left and right excursion, respectively. The patient’s perception was less reliable (less consistent with T-Scan III analysis) than clinician interpretation in protrusion and right excursion. However, both patients and clinicians equally perceived dental occlusion during the left excursion.

The limitation of this study was that there was only one dentist who evaluated dental occlusion and all participants were dental students who might not represent the patients in the other groups. Therefore, future studies should have a wide variety of dentists and patients. Moreover, a comparison of the combined patient and clinician interpretations with T-Scan III analysis may be beneficial.