Aim: Squamous cell carcinoma (OSCC) is the most common malignancy occurring in the oral cavity. It causes local invasion and nodal metastasis leading to an increase in morbidity rate. Vascular endothelial growth factor (VEGF)-C has been the most widely studied molecule involved in lymphangiogenesis. The aim is to study the expression of VEGF-C in OSCC using the immunohistochemical (IHC) method and is correlated with nodal metastasis.

Materials and methods: The study group consisted of 49 clinically and histopathologically diagnosed cases of OSCC. The tissue sections were subjected to IHC staining with anti-VEGF-C antibody and assessed for its expression and are correlated with the lymph node metastasis.

Conclusion: The present study results suggest VEGF-C can be used as an indicator marker in lymph node metastasis.

Oral squamous cell carcinoma (OSCC) is the most common malignant tumor of the oral cavity.1 Number of deaths of cancer patients is increasing due to local and distant metastasis through different routes blood vessels, lymph vessels, or directly into the tissues and body cavities.2 The malignant cells of head and neck squamous cell carcinoma (HNSCC), mainly spread through lymphatics to regional lymph nodes roughly 400 in number in the cervical region.3 Lymph node metastasis through the lymphatics in OSCC is a prognostic indicator of the disease. The levels of lymph node involvement indicate disease progression and treatment planning.4 The presence of lymph node metastasis at the time of diagnosis is an indication of poor prognosis. It has been suggested that the lymphatic vessels play only a passive role during this process and lymphatic invasion occurs when tumor cells infiltrate preexisting peritumoral lymphatics. But, the presence of intratumoral and peritumoral lymphatic vessels suggests their active role in metastatic spread to lymph nodes. The lymphangiogenesis has been studied by demonstrating the expression of lymphangiogenesis factors like vascular endothelial growth factor (VEGF)-C and VEGF-D by the tumor cells. The existence of lymphatic vessels by specific markers that locate the lymphatic endothelium supports the evidence of the presence of lymphatic vessels in the tumor environment.4 Vascular endothelial growth factor-C-activated VEGFR-3 (Flt-4) induces the growth of both lymphatic vessels and blood vessels in solid tumors and promotes the proliferation, migration, and survival of cultured human adult lymphatic endothelium. Overexpression of VEGF-C increases Flt-4-positive vessel density (FVD) and accelerates lymphatic invasion or lymph node metastasis.5 The goal of the current study is to determine the role of VEGF-C for tumor lymphangiogenesis in a series of HNSCC patients and is correlated with the presence of lymph node metastasis.

The present study was a retrospective study carried in Dr DY Patil Dental College and Hospital, Pimpri, Pune. The study was designed to compare the lymphangiogenic marker in OSCC cases with and without lymph node involvement. The study group is comprised of 49 cases of clinically and histopathologically diagnosed OSCC subjects and no controls were included. The demographic details of the cases like age, gender, and site of occurrence were included. Tumor (T) classification of OSCC was established using the International Union Against Cancer classification system and the histological grade was allocated according to the World Health Organization protocols. The blocks were obtained from the Department of Oral Pathology after approval by the ethical committee. The 49 sections were stained with hematoxylin and eosin subsequently immunohistochemical (IHC) staining for VEGF-C was done. No internal control marker was used for VEGF-C IHC staining.

The tissue sections of 4 μm thickness were deparaffinized and rehydrated in a graded series of alcohol. The sections were kept in a pressure cooker at 90° for 10 minutes in citrate phosphate buffer (pH 6.0) for antigen retrieval and then washed with distilled water. Endogenous peroxidase activity was blocked with 0.3% H2O2 for 30 minutes. Vascular endothelial growth factor-C (polyclonal antibody, Santa Cruz Biotechnology Inc., Santa Cruz, CA, USA; dilution 1:200) was applied as a primary antibody for 45 minutes at room temperature. After two washes with phosphate-buffered saline, a secondary antibody was applied to the sections; which are then incubated for 30 minutes at room temperature. The sections were washed with phosphate-buffered saline. The sections were treated with diaminobenzidine for 10 minutes. After which the sections were counterstained with Mayer’s hematoxylin, dehydrated, and mounted. 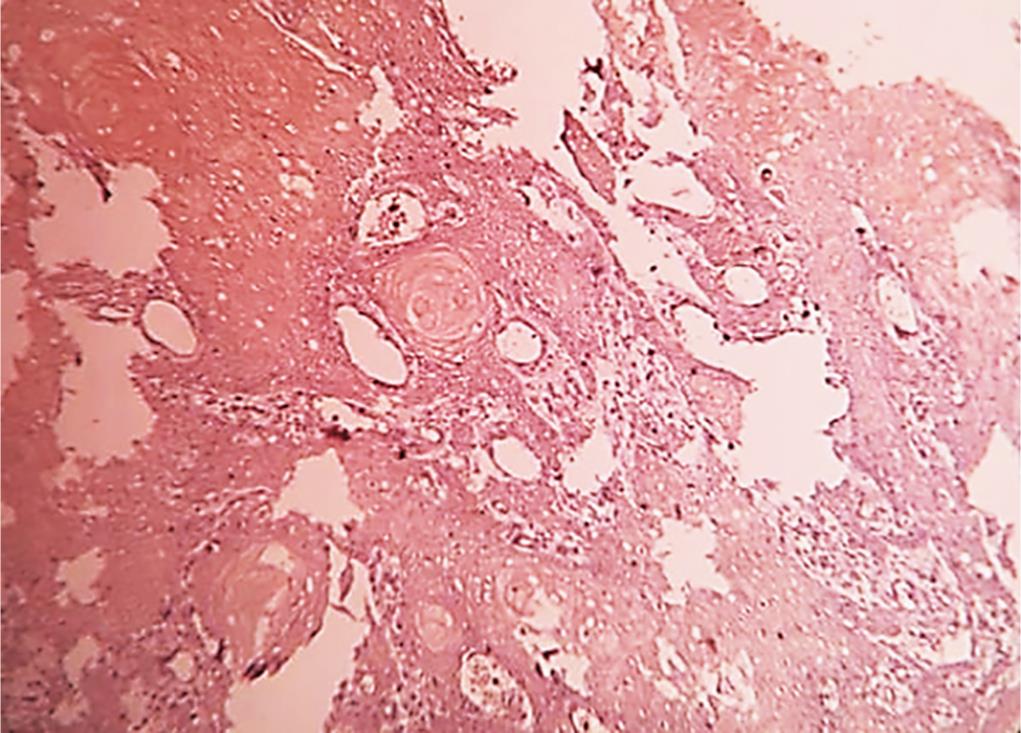 In the present study, 65.3% were males and 34.6% were females. Tobacco, either in smokeless or smoked form, is the major causative agent for OSCC. In India, tobacco-chewing and/or smoking habit is more prevalent in male when compared with females. Hence, we reported male predilection in the present study. This finding supports the data published in the literature.7–9

In the present study, the majority of the cases were in T4 stages when compared with early stages. This finding suggests the late diagnosis of OSCC in Indian settings.10 This could be because of a delay on part of the patient due to lack of awareness. Similar finds were reported in many studies published on OSCC in the Indian population. As early detection is the key to a good prognosis, we sense the need for mass awareness programs in OSCC.

In the present study, the common site of occurrence was buccal mucosa (28.5%) and gingivo-buccal complex (28.5%) followed by alveolar mucosa (24.4%) and buccal vestibule. Tobacco chewing habit is most prevalent in the Indian population in contrast to western countries where smoking is more common. The most common site for tobacco placement is the buccal and labial vestibule and hence these areas are subjected to direct carcinogenic attacks. This could be the main reason for buccal mucosa and the gingiva-buccal complex is the most common site.8,9,11 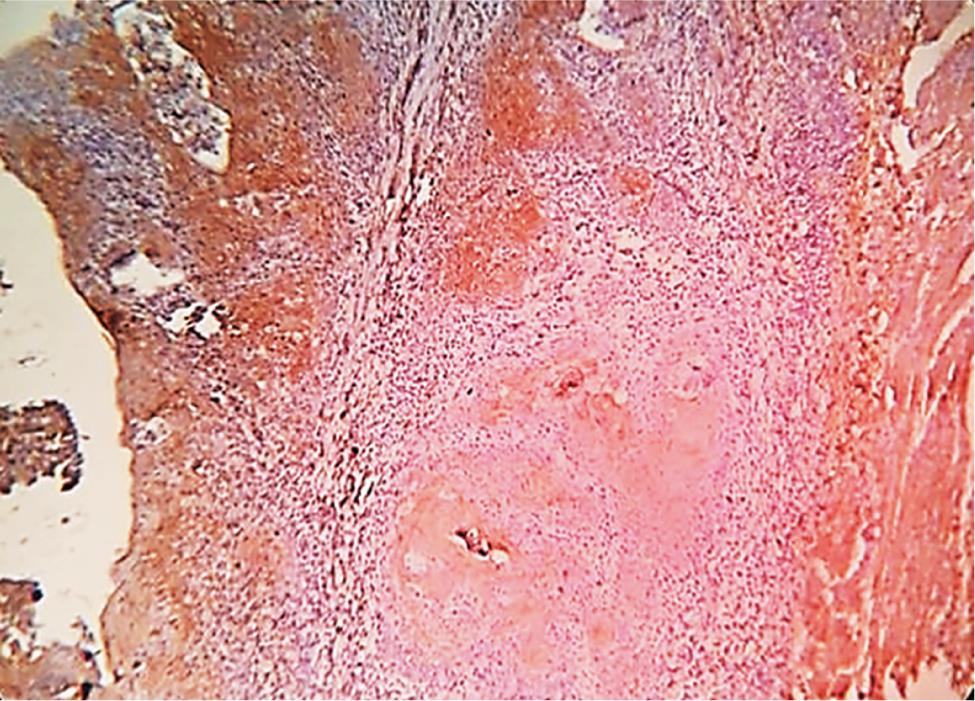 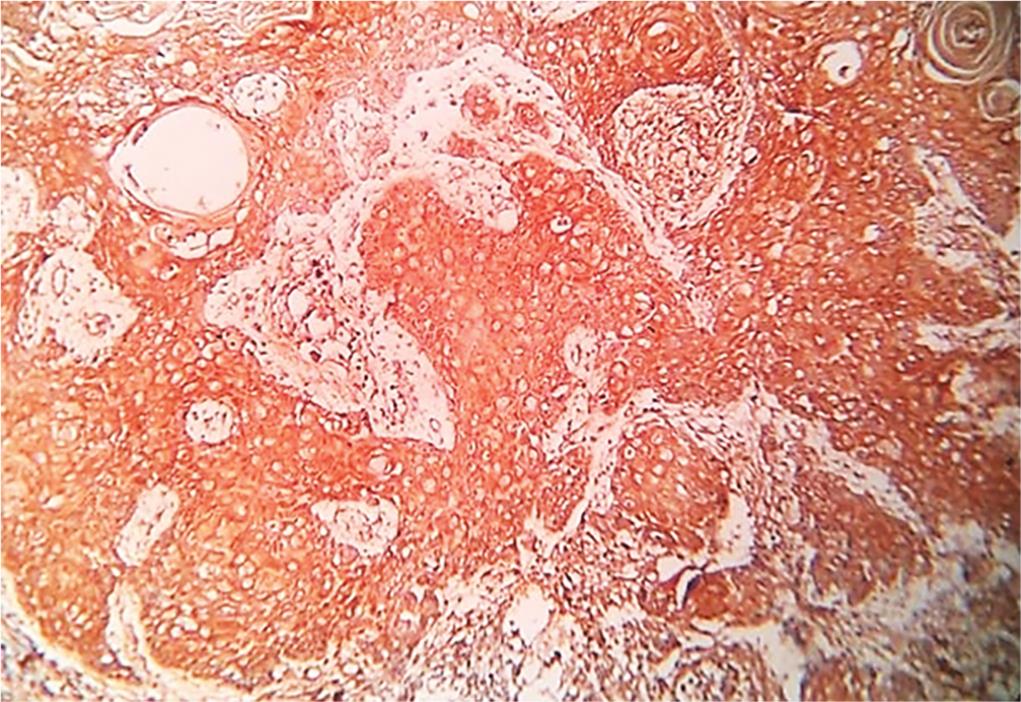 Our results suggest that VEGF-C can be used as a reliable predictor marker for regional lymph node metastasis, particularly in early OSCC.1,13 We recommend that VEGF should be done on a routine basis in incisional biopsy samples to decide appropriate therapeutic strategies for OSCC patients. Kitadai et al., Omoto et al., and Han et al. demonstrated that VEGF-C and VEGFR-3 expression is significantly associated with lymph node metastasis in esophageal SCC and gastric cancer.20–22 Furthermore, VEGF-C and VEGFR-3 expression was found to be significantly associated with poor survival rates in patients with esophageal SCC and gastric carcinoma.21,22 However, two studies reported by Witte et al. and Arinaga et al. showed no association between VEGF-C and VEGFR-3 expression and lymph node metastasis in colorectal and lung cancer.23,24

Based on the literature, VEGF-C is the most commonly studied molecule in inducing lymphangiogenesis. Other molecules like IL-1β and Caspase-3 have been studied in OSCC by Singh et al. and suggested as independent markers to predict metastasis in OSCC.25

In the present study, non-significant results were found when VEGF-C expression was compared among clinical stages and histopathology grading, conflicting results were reported in the literature regarding the role of clinical stages and histopathological grading in determining lymph node metastasis.15 Some studies have shown that clinical and histopathological grades were not useful for determining lymph node metastasis. However, future studies on a larger sample size are needed to further authenticate the present findings.

In conclusion, in the present study, lymph node metastasis cases showed significantly more VEGF-C expression when compared with non-lymph node metastasis cases. Hence, the use of this marker is recommended for the prediction of lymph node metastasis and further decision on deciding treatment modalities. The lack of follow-up of the cases, unavailability of prognostic data, and not using a control for IHC staining were the major limitations of the present study. Future studies are recommended on a larger sample size with prognostic data to further authenticate the role of VEGF-C in oral carcinogenesis.

Vascular endothelial growth factor-C marker can be recommended for the prediction of lymph node metastasis in oral squamous cell carcinoma.