Materials and methods: Sixty individuals (age, 8–57 years) with visual impairment were randomly recruited and divided into two intervention groups (n = 30 each) based on the mode of oral hygiene instructions: verbal and Braille. A questionnaire with 15 close-ended questions was used to assess knowledge, attitude, and practices related to oral health. The periodontal status (using oral hygiene, gingival, and plaque scores) was examined, and oral prophylaxis was performed. After 3 months, reassessments were conducted to evaluate the oral hygiene and overall knowledge in each group.

Results: Baseline responses showed low knowledge and poor attitudes toward self-care of oral health among the subjects in both groups. After 3 months of follow-up, the mean overall knowledge of the remaining 53 participants was significantly (p < 0.05) increased from (3.97 ± 1.33 and 4.21 ± 1.4) to (5.77 ± 2.79 and 11.62 ± 2.5) in the verbal and Braille textual instructions groups, respectively. Significant reductions in oral hygiene, gingival, and plaque scores from baseline were observed in both groups (p < 0.01). After 12 weeks, the plaque, calculus, and oral hygiene indices were significantly lower in the Braille group (n = 27) when compared with those in the verbal group (n = 26; p < 0.01). There were three dropouts in the Braille group and four dropouts in the verbal group.

Conclusion: This trial demonstrated the effectiveness of using a textual Braille to improve both the knowledge and clinical periodontal indices in visually impaired individuals when compared with that of a verbal intervention alone.

Clinical significance: The study revealed that Braille textural communication can be used as an effective tool to implement oral hygiene instructions in visually impaired individuals.

Oral health is an important part of general health and can impact the quality of life of the individual. Visual impairment refers to the condition where the eyesight of an individual cannot be restored to normal; the decrease in visual function hinders the ability to conduct the normal activities of daily living.1 Individuals with visual impairment face difficulties in maintaining their oral health due to the inability to detect and identify oral disease at an early stage.2 A recent systematic review and meta-analysis by Bourne et al. reported that an estimated 36 million people experienced blindness and 405 million people had visual impairment (ranging from mild to severe).3 A vast majority of them live in developing countries, including Arabic-speaking countries such as Saudi Arabia.4

Good oral health is important to maintain the quality of life of an individual. Therefore, it is important to create awareness about oral health promotion among visually impaired people. The early symptoms of oral diseases that are usually identified through vision might be missed in individuals with visual impairment leading to poor oral health. For example, signs of tooth discoloration and gingival conditions may remain unnoticed in the visually impaired and lead to further deterioration of the oral condition unless informed about the situation and treated on time. Some individuals with visual impairment may have limited manual dexterity which could affect some of their oral hygiene skills, such as toothbrushing and flossing. Studies have shown that oral hygiene in a visually impaired or blind person is worse than that in a normally sighted individual.5,6 A recent study conducted in Riyadh, Saudi Arabia, reported inadequate plaque control, extensive gingivitis, and limited access to healthcare providers among visually impaired adults.7 A study by Chang and Shih in Taiwan reported that visually impaired children had less knowledge about dental health and did not perform oral hygiene practices as well as sighted students.8

This study aimed to assess the knowledge of oral hygiene and to compare the effectiveness of both verbal and textual Braille oral hygiene instructions in improving the periodontal health status of Arabic-speaking individuals with visual impairment.

This randomized trial with a parallel study design and an allocation ratio of 1:1 was carried out at the Periodontics Clinics at the College of Dentistry at Jazan University. Ethical clearance was obtained from the ethical committee of the scientific research committee, College of Dentistry, Jazan University (reference number: CODJU-1731I). The purpose of the study was explained to the participants and written consent was obtained. The study was carried out according to the guidelines of the Helsinki declaration.

A total of 72 visually blind individuals between the age group of 8 and 57 years were randomly enrolled from the various blind schools in the province of Jazan, Saudi Arabia. The inclusion criteria for the study were as follows: complete blindness; knew how to read Braille; provided informed consent to participate in the study. Nine individuals did not meet the eligibility criteria and three individuals declined to participate in the study. Hence, a total of 60 visually impaired subjects were finally selected and their knowledge of oral hygiene was assessed.

The patients were then divided into two groups using a simple randomization technique.

A table of random numbers was employed for the simple randomization of the subjects to the educational intervention. To prevent selection bias, a centralized assignment was used as an allocation concealment mechanism. The details of the randomization and recruitment are represented in Flowchart 1.

A close-ended questionnaire in the Arabic language was adopted from a study by Fageeh et al., which assessed the effectiveness of oral hygiene instructions in sign language for the hearing impaired.18 The questionnaire contained 15 questions designed to assess the knowledge, attitude, and practices related to oral health (Appendix 1). All the questions had multiple choice answers based on information that was presented in the content. A correct answer to the question was given a score of “1” and a wrong answer was given a score of “0”. All answers were evidence-based which are readily available from position papers published by the American Academy of Periodontology (AAP). A knowledge score was calculated for each participant by calculating the number of his correct answers on the questionnaire. 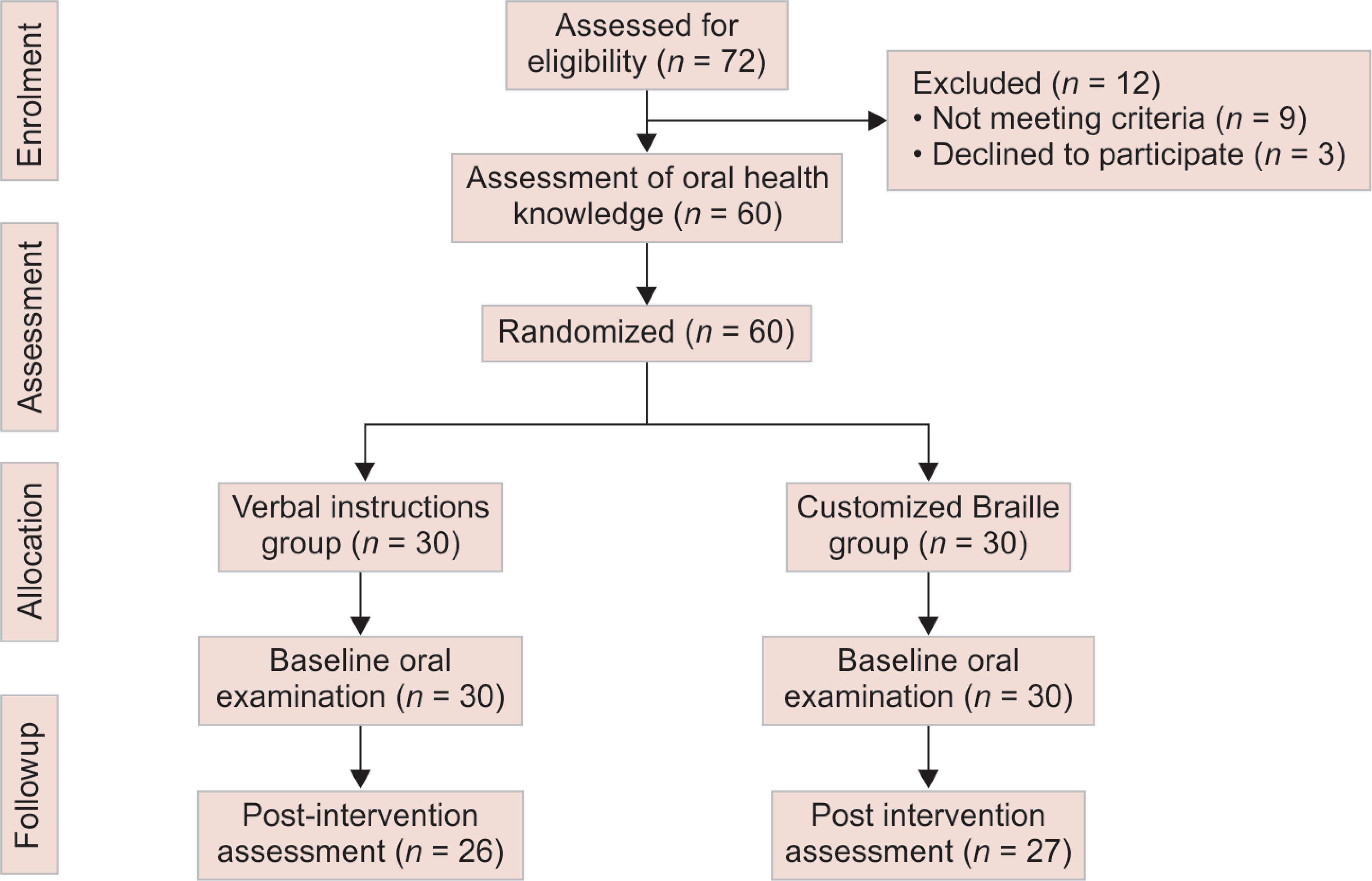 Flowchart 1: Randomization and sample selection used in the study

After an interval of 3 months, another questionnaire-based knowledge assessment was conducted for all of the participating subjects. The knowledge score and percentage of correct answers were then compared before and after the intervention for each question. The estimated mean of knowledge was then calculated for each group and compared before and after the intervention. The investigator was blinded to the group assignment in the study and was present with each subject when the questionnaire was being filled out by their accomplice to ensure that they had fully understood the questions in the questionnaire.

An oral examination of the periodontal health status was conducted by a single investigator who was masked to the randomization of the subjects. The simplified oral hygiene index (OHI-S by Green and Vermillion), gingival index (GI by Loe and Sillness), and plaque index (PI by Sillness and Loe) were used to assess the baseline oral hygiene, gingival, and plaque indices, respectively. This was followed by full mouth scaling and polishing by another examiner who delivered the oral hygiene instructions verbally or by Braille.

Reassessment of knowledge using the same questionnaire and reevaluation of clinical scores were performed at 3 months by the same investigator who performed the baseline examinations. The investigator was blinded to the group assignment in the study. There were dropouts of four visually impaired individuals in the verbal instructions group and three dropouts in the Braille instructions group. Subsequently, a complimentary prophylaxis session was provided to the subjects.

The results are presented as mean ± standard deviation. Chi-square test was used to assess the difference in the distribution of the participants by different grouping factors (qualitative variables). Shapiro–Wilk’s test was used to check for the normality of the qualitative data. Differences in these qualitative dependent variables between the two groups (between-group comparisons) were assessed using an independent t test. A paired t test was used for within-group comparisons. Data were analyzed using SPSS software (version 21; IBM, Armonk, New York, USA). A p value of <0.05 was considered significant.

The characteristics of the subjects included in this study are shown in Table 1. A total of 47 males (verbal group, 25; Braille group, 22) and 13 females (verbal group, 6; Braille group, 7) were included in the study. The mean ages of the subjects in the verbal and Braille instruction groups were 23.03 ± 10.83 and 22.03 ± 10.69 years. No significant differences in mean age or gender distribution were observed between the two groups.

The present study aimed to ascertain the knowledge of oral health and the effectiveness of using Braille instructions for improving this knowledge among Arabic-speaking visually impaired individuals in the province of Jazan, Saudi Arabia. In addition, the oral health status of the individuals was evaluated.

Similar to the findings of the studies by Khurana et al.,13,14 significant decreases in the mean OHI-S, PI, and GI scores were observed before and after the intervention in both groups in the current study. The instructions provided to patients generally include an explanation about the benefits of maintaining good oral hygiene. In addition, various methods of toothbrushing and interdental cleaning are demonstrated using visual aids. However, these methods cannot be used for blind or visually impaired patients. A recent study comprising 48 visually impaired children demonstrated the effectiveness of using auditory instruction materials for improving oral hygiene.9 The children were divided into two groups and instructions were provided using audio or audio-tactile methods. The children in both groups demonstrated improved oral hygiene with no significant differences between the two groups. Another study conducted with 96 visually impaired children (6–18 years old) demonstrated significant reductions in their plaque scores after the provision of oral health education using the audio-tactile method.10 Recently, a study conducted in Bulgaria demonstrated the benefits of providing oral health education to blind children using other modes such as embossed images printed on special microcapsule paper, models of teeth, and audiotapes; significant improvements in the oral hygiene habits of the visually impaired children were reported.11

Visual impairment can harm the oral hygiene status of an individual because they cannot see the build-up of calculus and debris in the oral cavity. Visually impaired children have been reported to have poor skills and knowledge about oral hygiene.8,19 The development of skills in visually impaired children is slow and challenging due to difficulties in orientation and forming spatial concepts.20 Parents or caregivers play a major role in assisting children with visual impairment. The instructions must be provided clearly, slowly, and in a repetitive manner. Verbal instructions and tactile methods have been used to improve the toothbrushing habits in these children.6,11,14 A recent study evaluated the effects of various sensory input methods (audio, Braille, tooth models, and a combination of all three) on the oral health knowledge and hygiene of 200 blind children aged 8–14 years.15 Significant improvements in mean knowledge scores and reductions in plaque scores were observed in the children who received oral health education using these special methods.

Arabic Braille oral hygiene instructions can immensely improve the knowledge about oral health and hygiene practices among the visually impaired individuals and should be recommended for use in various healthcare centers in Saudi Arabia. The small study group used in the study and the Arabic Braille OHI which can be used only for a limited population are the main shortcomings of the study. Further studies using a wide population and modifying the language barrier in Braille instructions can be an effective method in improving the oral health status of visually impaired children.