Relationship between Chief Complaints and Severity of Periodontitis in Patients Seeking Periodontal Therapy: A Retrospective Study

Aim: The aim of the study was to assess the relationship between chief complaints (CCs) and severity of periodontitis in patients seeking periodontal treatment at Saveetha Institute of Medical and Technical Sciences (SIMATS), Chennai.

Materials and methods: This retrospective study was carried out by analyzing the patient records from June 2019 to March 2020. Two hundred and forty-four patients who reported to the Department of Periodontics, seeking periodontal therapy in this period were included in the study. Parameters assessed were (a) demographic details—patient name, patient identity number, age, and sex; (b) periodontal parameters—periodontal probing depth (PDD), loss of attachment (LOA), bleeding on probing (BOP), severity of periodontitis (mild, moderate, and severe); (c) CCs and type of CCs (chronic symptomatic, acute symptomatic, and asymptomatic). Chi-square test was performed to assess the relationship between type of CC and severity of periodontitis using SPSS version 23.0 (Statistical Package for the Social Sciences).

Conclusion: The most common CC reported was bleeding gums. But further longitudinal studies with larger sample size are needed to be performed.

Clinical significance: Patient’s CC is considered as a vital component for providing competent and good quality healthcare. The severity of the disease is said to have an influence on the CCs reported by the patients.

Periodontitis is a chronic inflammatory disease, characterized by destruction of the supporting structure of the teeth. Periodontal disease is multifactorial and is influenced by several risk factors. The role of gram-negative anaerobes in periodontal destruction is well known. Lately, the viruses have been recognized to play a major role in the pathogenesis of chronic periodontitis (CP). Among the viruses, cytomegalovirus (CMV) and Epstein–Barr virus (EBV) are of most importance.1 Chronic periodontitis is a host-mediated inflammatory disease which is characterized by elevated levels of various cytokines and inflammatory mediators. Tumor necrosis factor (TNF) is one such proinflammatory cytokine that causes periodontal tissue destruction.2 Interleukins like IL-1, -6, -8, and -12 have been previously proved to cause definitive periodontal destruction. Recently, interleukin-21 (IL-21) has obtained paramount importance in causing amplified tissue inflammation, damage, and destruction.3 Expression of peptides like endothelin-1, which is a potent vasoconstrictor, can increase the expression of cytokines like interleukin-1β (IL-1β), tumor necrosis factor-α (TNF-α), and IL-6.4,5 Recent literature has established that periodontitis could be a probable risk factor for cardiovascular diseases, such as atherosclerosis, stroke, myocardial infarction, diabetes, and respiratory disorders. Periodontitis and chronic obstructive pulmonary disease (COPD) share a common risk factor profile. They manifest as chronic inflammation with underlying connective tissue destruction.6

The diagnosis of active phases of periodontal disease is a challenge for the clinicians. Over the last few years, several advanced radiographic techniques have been developed, such as cone beam computed tomography, which help in better treatment planning and hence the treatment of the disease.7 The early diagnosis and treatment planning in periodontitis is of huge importance, because it eventually leads to tooth loss and prosthetic replacement of these sites becomes difficult. Dental implants have become a crucial part of prosthetic rehabilitation in periodontitis over the last few years.8 Initial treatment of periodontal disease is performed by non-surgical periodontal therapy, which includes scaling, root planning, systemic antimicrobials, and plaque control methods. Various antimicrobials and chemotherapeutic agents, such as chlorhexidine, triclosan, and cetylpyridinium chloride, have been used in the management of periodontal diseases. Due to its multifactorial etiology and complex disease process, the treatment of periodontitis is still a difficult task to dentists. Hence, herbal remedies, such as triphala mouthwash and Hiora mouthwash, have been used to achieve antimicrobial, antioxidant, and anti-inflammatory effects.9,10 When periodontitis is left untreated, it might lead to loss of teeth, function, and esthetics.11 One of the most common esthetic concerns associated with the periodontal tissue is gingival recession.12 Deep periodontal defects can be managed by regenerative procedures. For complete periodontal regeneration, delivery of growth factors are considered as an adjunct to bone grafts.13,14 In recent days, stem cells have been used for regenerative therapy. Dental tissues, such as the periodontal ligament (PDL), the dental pulp, and the tooth follicle, have been recognized as readily available sources of adult stem cells.15

Compared to the Western countries, the level of patient compliance and number of referrals for periodontal therapy in India are relatively less. Community-based screening shows high prevalence of periodontal disease in India.16 The concept of referral is unclear and still developing among Indian dentists. Apart from referral, factors like patient motivation and compliance may influence their decision on periodontal treatment. In clinical practice, the most crucial step in managing patients is defining the objectives of treatment protocol. This is dependent on the basis of the patient’s requirement.17 The chief complaints (CCs) and reasons for seeking periodontal care are principal sources of information for the dentists. Periodontal diseases are usually inactive in nature, presenting with chronic or asymptomatic CCs.18,19 Patients’ CCs correspond to their immediate need and their attitude toward periodontal treatment. Compared to other presenting symptoms, focusing on the CC can aid in early diagnosis and treatment of the disease.

Clinical objectives of dental practices rely simply on specific and clear CCs.20 A CC can be defined as a subjective statement given by the patient that explains the most significant symptoms that caused him or her to seek treatment. It is usually recorded in the patient’s own words. Multiple complaints are recorded in a chronological order to assess the patient’s perception of their problem.21 The urgency of the patient to seek dental treatment depends on the severity of their complaints.22 According to the American Dental Association, a patient’s CC is considered as a vital component for providing competent and good quality healthcare.23 Recording CCs help in maintaining comprehensive information about patient care. The CC is the initial step in dental history taking and is a brief statement explaining the symptom and condition that demands a dental visit. The patient’s initial comments aid in determining a differential diagnosis. Recording and identification of CCs are also considered the foundation for developing a rational treatment plan.24 This study was intended to assess the most common CCs of the patients seeking periodontal therapy and evaluate the relationship between CCs and severity of periodontitis at Saveetha Institute of Medical and Technical Sciences (SIMATS).

This retrospective study was carried out by analyzing the patient records from June 2019 to March 2020. The study design was reviewed and approved by the Ethical Committee of SIMATS (Ethical approval number. SDC/SIHEC/2020/DIASDATA/0619-0320).

Data from 244 patients who were diagnosed with CP and referred to the Department of Periodontics, SIMATS, were included in the study. Data were derived from the hospital’s digital record management system called dental information archiving software. Patients with aggressive periodontitis or any systemic diseases that may influence the periodontium like diabetes, pregnancy, immunological disorders, and smokers were excluded from the study. Case sheets with incomplete data were excluded from the study.

All descriptive data were analyzed using frequency distributions; Chi-square test was performed to assess the relationship between type of CC and severity of periodontitis. Statistical significance was set at p < 0.05. Analyses were conducted with a statistical software SPSS version 23.0 (Statistical Package for the Social Sciences). 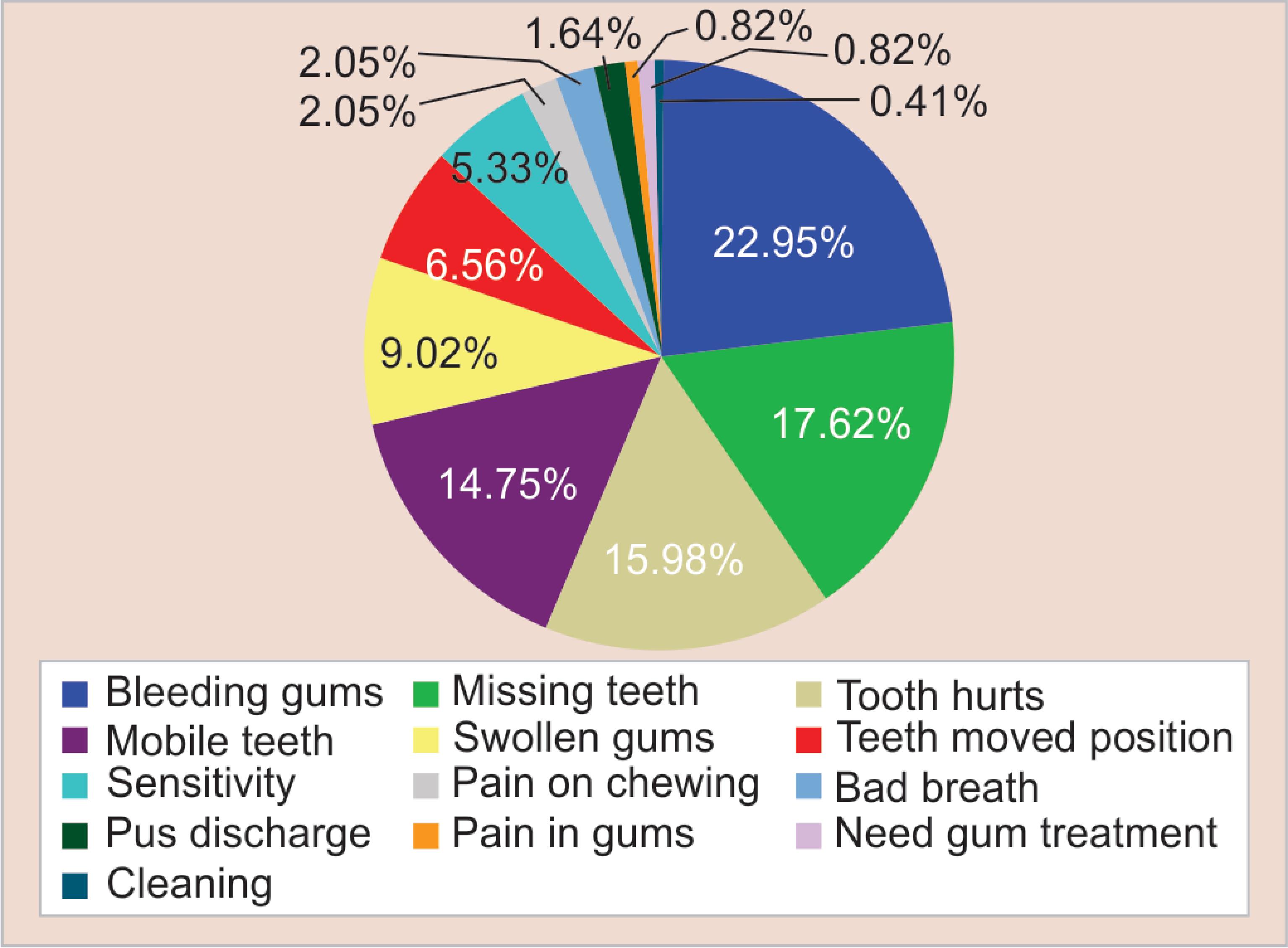 Relationship between CC and Severity of Periodontitis (Fig. 3) 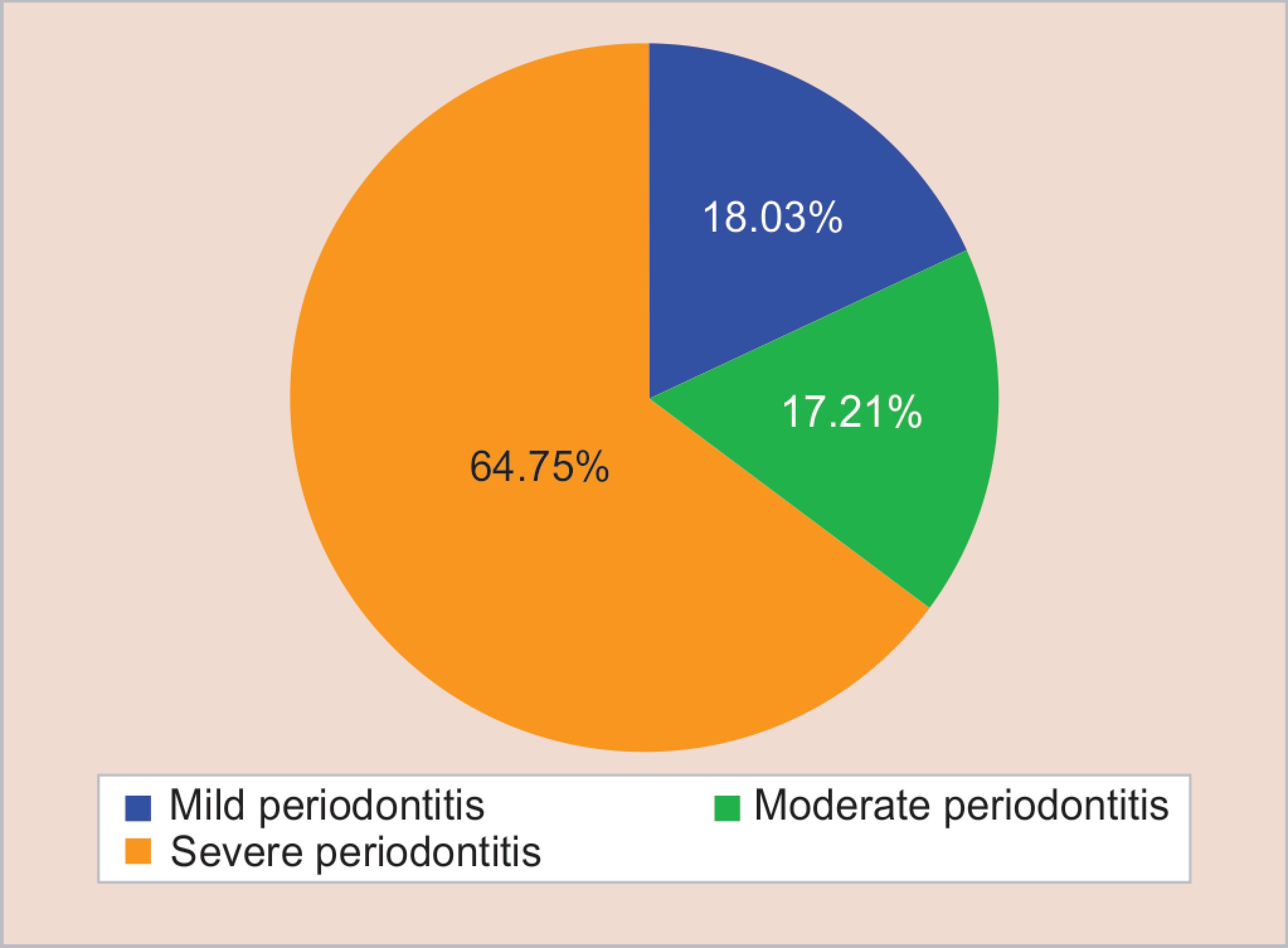 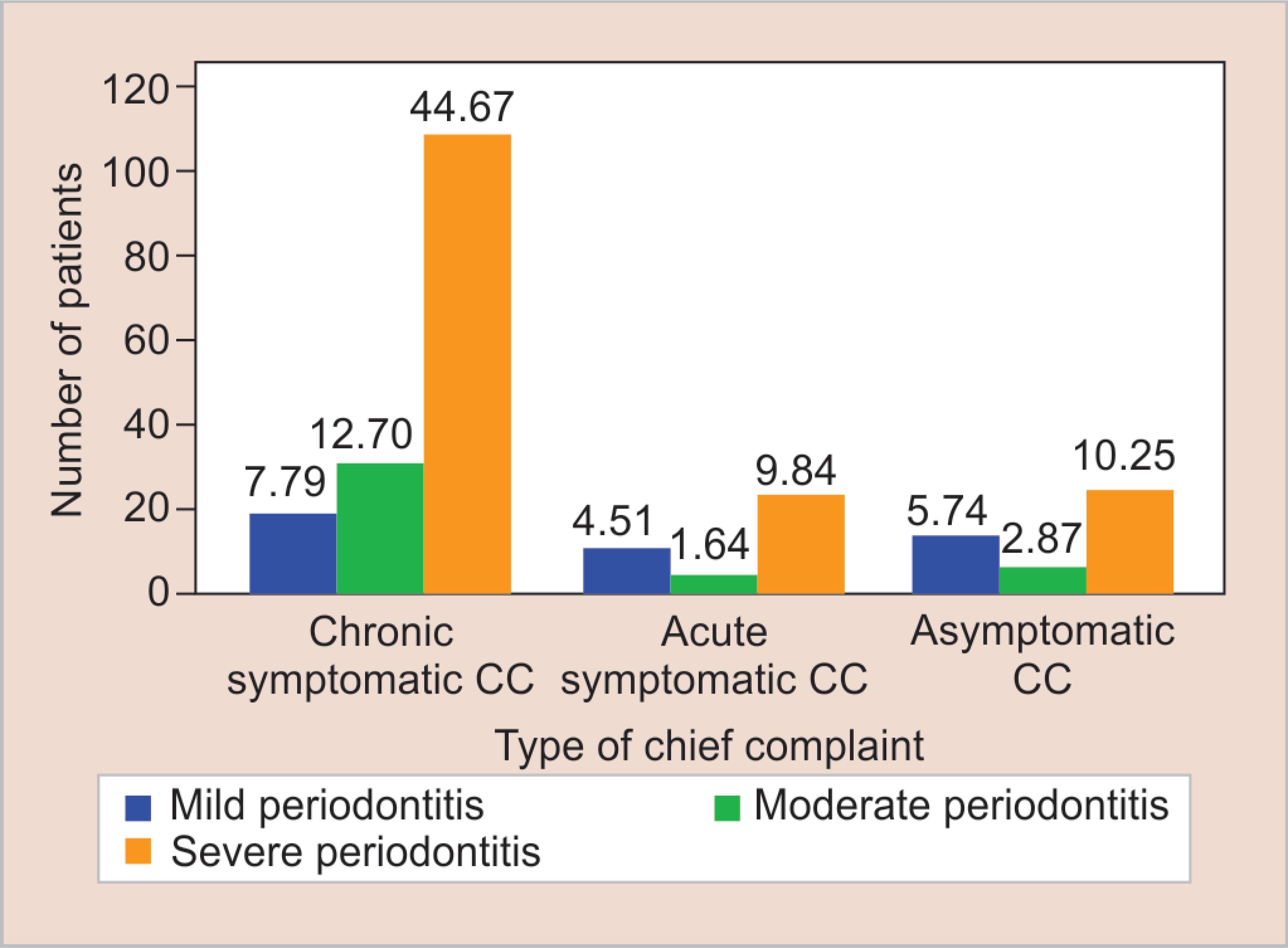 In the present study, irrespective of the type of periodontitis, the first most common CC is bleeding gums (22.95%), second most common CC is missing teeth (17.62%), and the third most common CC is tooth pain (15.98%). The finding is similar to the study performed by Demetriou et al.,26 and Brown et al.,27 where gingival bleeding was the most common clinical symptom that directed patients to seek periodontal treatment. These findings were not in accordance with the studies by Brunsvold et al., 1999, where the most common CC was “I was told I have gum disease”, which was19 reported by 31.4% of the subjects. Second most common CC reported was, “I would like to save my teeth”, which was reported by 20.4% subjects. This study was performed in American population at the University of Texas. A study performed by Yeh and Lai in the Taiwan population showed that most commonly patients stated that “they need gum treatment”.28 This difference in the findings is because of the lack of awareness about gum diseases among Indian population.

Our study solely depends on the ability of the patients to express their complaints. Patients may not reveal all his problems, or may even hide some of his problems, assuming that they may be irrelevant. Difference in the interpretation of the CCs by the examining dentist can affect the recording of the CC. Factors like educational level, travel distance, smoking status, and socioeconomic status may influence patient compliance, they were not considered. Further longitudinal studies with larger sample size are needed to be performed.

The CC is the initial step in dental history taking and is a brief statement explaining the symptom and condition that demands a dental visit. Within the limitations of the study, the results of this study suggest that the CC is an essential component of the dental history, with bleeding gums being the most commonly reported among the patients seeking periodontal therapy.

Patient’s CC is considered as a vital component for providing competent and good quality healthcare. The severity of the disease is said to have an influence on the CCs reported by the patients. Thus, determining the relationship between the CCs and severity of periodontitis in patients seeking periodontal therapy is essential.