Aim and objective: This study aims to evaluate the use of hyaluronic acid (HA) on the free gingival graft (FGG) applied to mandibular canines with Miller class I or II gingival recession (GR) or without attached gingiva by evaluating tissue healing, swelling, and dimensional changes.

Materials and methods: This split-mouth clinical study has an examiner–patient blinded design. Eighteen patients with bilateral class I or II of Miller classification of GR in the mandibular canine region with %3C;2 mm of attached gingiva were treated with FGG and randomly assigned to experience either natural healing (control group) or HA-assisted healing (test group). Tissue healing index, swelling, and dimensional changes were registered at baseline, 1, and 3 months post-surgery. Statistical analysis was performed to examine differences between study groups.

Conclusion: It may be concluded that within the limits of this study that the adjunctive use of HA may be beneficial in the healing process of FGG.

Clinical significance: The application of HA helped improving the healing of FGG, which makes the process faster and more predictable.

Gingival recession (GR) is described as an apical displacement of the gingival margin beneath the cementoenamel junction (CEJ).1,2 The exposure of the root causes major clinical problems including esthetic, hypersensitivity, and periodontal attachment loss.3

The free gingival graft (FGG) is considered as one of the most used mucogingival surgical procedures for the treatment and management of mucogingival deformities around natural teeth and implants.4,5

One of the biggest disadvantages of FGG procedure is postoperative graft shrinkage.6 This shrinkage is related to several factors including graft thickness,7 gingival tissue phenotype, and surgical procedure.8

Factors affecting the development of a new blood supply between the graft and the recipient site play an essential role in graft shrinkage.7

Hyaluronic acid (HA) exists in most of the body fluids, such as saliva and crevicular gingival fluid, and is a component of gingival tissue and the cellular membrane of some cells, like fibroblasts, chondrocytes, and lymphocytes type B.9,10 Hyaluronic acid takes part in the formation of periodontal ligament and by a less extent in alveolar bone formation.11

Hyaluronic acid helps in stimulating the inflammatory response in phagocytes, endothelial cells, basophils, and some of the epithelial cells as well as contributing in wound healing and scar formation.9,12

Considering the composition of HA and its role, it has been used in the medical and the esthetical fields. In dentistry, HA has been used for several purposes and treatments, such as wound healing after tooth extraction,13,14 degenerative joint disorder of the temporomandibular joint,15 sinus lifting instead of applying any graft, and oral ulcers management.16,17

In periodontology, HA is used as an adjunctive material for surgical or non-surgical periodontal treatment to reduce inflammation and improve healing.18,19

This study aims to evaluate the use of HA on the FGG applied to mandibular canines with Miller class I or II GR or without attached gingiva by evaluating tissue healing, swelling, and dimensional changes.

The study was conducted in the Department of Periodontology, Damascus University. The study protocol was approved by the Ethics Committee at the Faculty of Dentistry. All participated patients were informed of the study protocol and their written consent was obtained.

This split-mouth clinical trial had an examiner–patient blinded design. Eighteen patients with bilateral class I or II Miller GR in the mandibular canine region and <2 mm of attached gingiva were assigned to be treated with FGG sides were allocated randomly through a coin toss for the first case and then rotated in the remaining cases either to receive a standard FGG procedure (control group) (Fig. 1) or FGG with HA application (test group) (Fig. 2). The study subjects were recruited between 2018 and 2019 according to the following criteria.

The patients were older than 20 years and presenting bilateral class I or II Miller GR in the mandibular canine region. The included teeth were vital and had no caries or restorations. The plaque and the gingival index scores were <1. All patients had to be systematically healthy and non-smokers.

Patients with the following conditions were excluded:

All patients received basic scaling, plaque control, and oral hygiene instructions. However, only patients with complete plaque control were assigned for surgery.

All surgical procedures were performed by one qualified resident of the Department of Periodontology at the Faculty of Dentistry, Damascus University (AB) according to the surgical technique described by Langer and Langer. Both sides were treated in the same surgical session.

Local anesthesia was achieved with 2% lidocaine with 1:100,000 epinephrine. A horizontal incision was made at the mucogingival line by #15 surgical blade. The incision included the mesial and the distal papilla adjacent to the recession area. A split thickness flap was performed to keep the periosteum covering the bone in the recipient site intact and the coronal tissues to the horizontal incision were de-epithelized. The denuded root surface was treated with a curette and rinsed with saline. A saline-moistened gauze was placed over the recipient site until the graft was harvested from the palate. The graft dimensions were the same in both sides based on a customized aluminum foil for each patient. 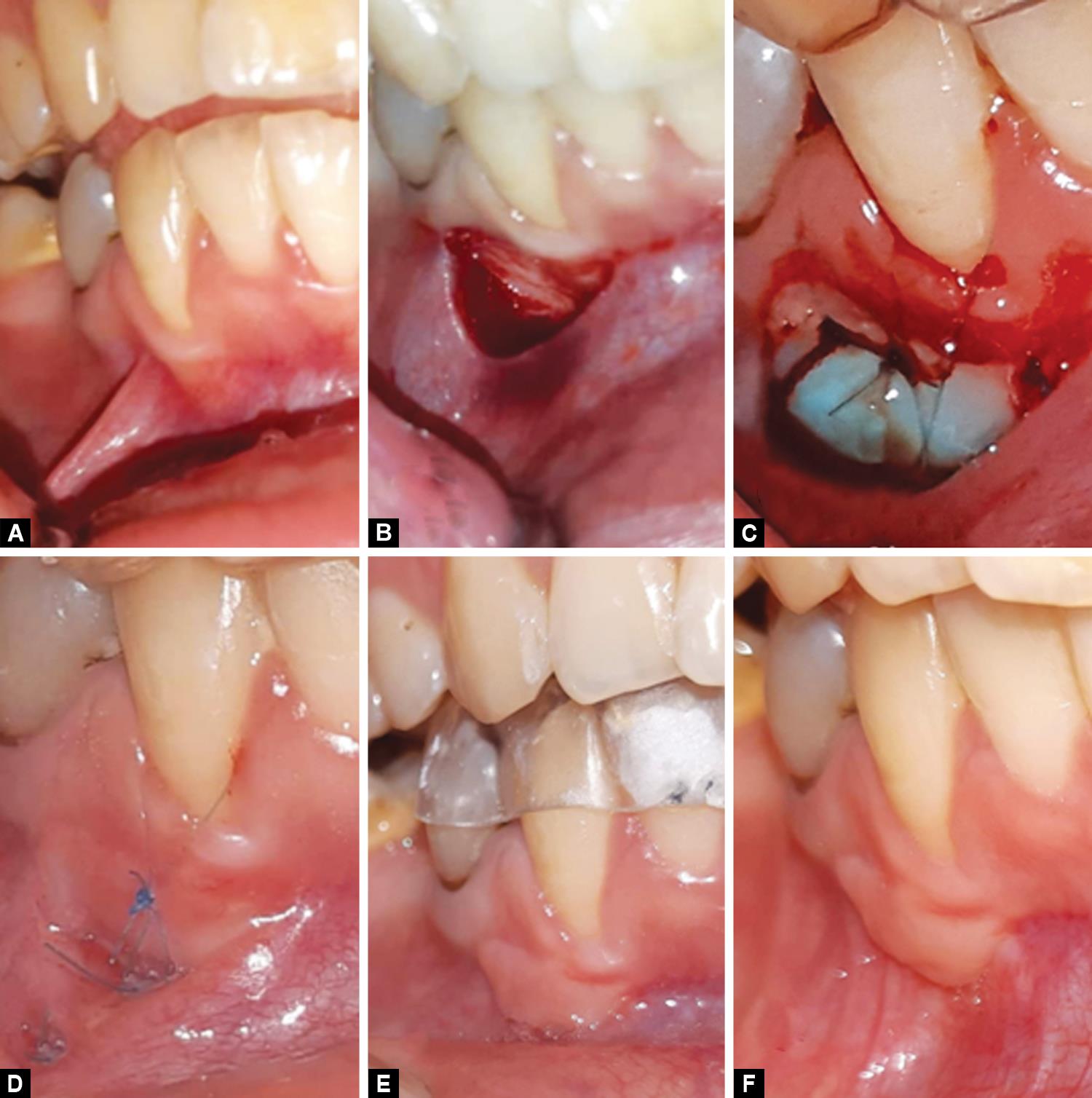 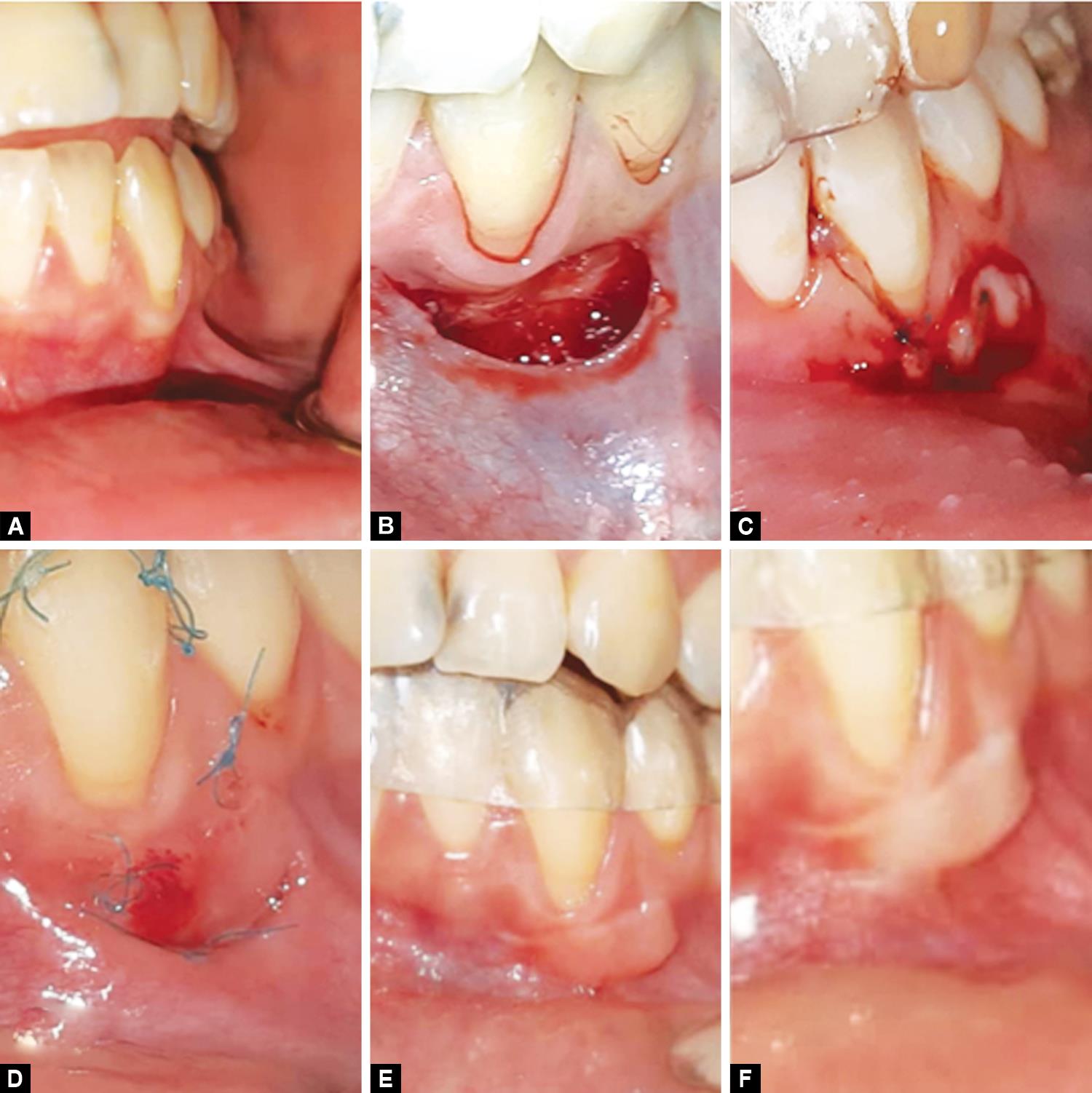 The transplanted graft was adapted to the recipient site with gentle compress and sutured with 6-0 nylon sutures.

The palatal wound was covered by a periodontal dressing and an acrylic stent was placed on the donor site for 1 week to stabilize the dressing.

Same surgical steps were followed as in the control group but HA gel (Klipdent, Valdmiva, Russia) was applied to the recipient site using sterile syringe containing 1 mL of the gel which has a slow-dissolving pattern prior to graft suturing. Patients were blinded of which side received the gel (Fig. 3).

Free gingival graft was performed without any additives.

Acetaminophen 500 mg was prescribed four tablets/day for 3 days. Patients were instructed not to use dental brush in the surgical area until sutures removal after 2 weeks. A 0.12% chlorhexidine rinse three times daily was prescribed in order to inhibit plaque accumulation.

Healing was evaluated with the following parameters: Erythema, bleeding, and granulation tissues, and was estimated in days 3, 7, 14, 21, and 28 with a 5-level score index: Grade (1) very poor healing and grade (5) excellent healing.

A visual analog scale (VAS) graded from 0 to 10 was used by the patient to record postoperative pain intensity daily for the first week. Grade (0) is no pain and grade (10) is extreme pain. Patients were also asked to record the number of analgesics intake.

Figs 3A and B: (A) Harvested grafts thickness; (B) A sterile syringe containing hyaluronic acid gel

A headgear with a special arm to hold the camera in specific repeatable manner was designed and photographs of the surgical sites were taken in order to ensure that we had the same reference position during the follow-up period. The photographs were analyzed by the examiner who was blinded about the treatment protocol; a computer-based analysis program (Image National Institutes of Health, USA) was used. The photographs were taken at baseline and at 1- and 3-month follow-up.

Statistical testing was carried out using SPSS (version 21, Chicago, Illinois, USA). A descriptive analysis was conducted (standard deviation, mean, and frequency distribution) for the collected data. The Wilcoxon test was used to analyze the differences over time in the same group. The Mann–Whitney U-test was used to assess intragroup comparisons. Data were considered statistically significant at level <0.05.

Of 18 participant patients first treated, 3 did not complete the treatment or the follow-ups. Fifteen patients (12 females, 3 males) completed the follow-up period.

Photographic Analysis of the Graft Dimensions and Shrinkage

Many researches have studied the FGG healing, postoperative complications, and dimensional changes.

In this split-mouth, clinical study two FGGs were conducted in the mandibular canine region at the same session. Both grafts had similar dimensions. The attached gingiva width was <2 mm with class I or II Miller GR.

Furthermore, this study demonstrated statistically significant differences between the test and the control groups during the first postoperative week in swelling. This result can be referred to the HA moisturizing properties and its effectiveness in accelerating migration of the lymphocytes and inflammatory cells in the wound and activation of the connective tissue cells.24

In Pilloni et al. study which compared between the coronally advanced flap (CAF) alone and CAF with topical HA and found that HA application reduces the post-surgery edema where p = 0.01 while no difference were noticed in the pain as p = 0.151.25

The systematic review of Casale et al. analyzed the statistical results of 20 studies for topical application of HA and its effect on gingival inflammation, chronic periodontitis, and implantation, sinus lifting and oral ulcers. This systematic review showed that the topical application of HA accelerates tissues and wounds healing in the oral cavity and participated in gingival inflammation healing and chronic periodontitis healing as well as improving patient’s life quality.21

Romeo et al. study about amino acid and hyaluronate sodium impact on oral wound healing after using the laser for biopsy showed a statistically significant difference in tissue healing index for the hyaluronic, while there were no differences in pain index.26

In our study, no statistically significant differences were found for pain values during all 7 days following the surgery between both groups. This can be explained by the individual variations in pain threshold.

In previous studies, graft dimensional changes were evaluated by measuring the vertical and the horizontal dimensions using a periodontal probe, a digital caliber, or a computer-based photograph analysis.8,27,28

Hatipo and Keçeli studied the dimensional changes of the FGG at 10, 21, and 180 days. No horizontal changes were observed during the study periods (p %3E; 0.05). However, there were significant differences in the vertical dimension (p < 0.05).8

In our study, topical application of the HA in the recipient site reduced the graft shrinkage at 1- and 3-month periods. However, the differences were not statically significant between the groups (Table 3).

The HA enhanced the graft blood supply through accelerating the neovascularization between the graft and the adjacent tissues leading to reduction in graft shrinkage and therefore, fewer abnormalities in the graft appearance.23

Çankaya et al. used HA in the recipient site and then applied laser Doppler flowmetry (LDF) laser to evaluate the graft blood flow. They found statically significant differences in vertical shrinkage of the graft at 1 month after surgery.29 We attribute the discrepancies with our study to the fact that they used the FGG procedure to deepen the vestibule in edentulous regions, thus providing more blood supply to the graft, whereas, our study included teeth in the surgical area which will impair the blood supply. Moreover, the soft tissue biotype and the individual variations in the healing process play a role in this disagreement.

This study has some methodological limitations, as we did not distinguish between gingival phenotypes before surgery, so for the future studies it is better to subdivide the groups based on the gingival phenotype to further evaluate the HA effect on graft healing and shrinkage. In addition, to a longer follow-up period.

The adjunctive use of topical HA with the FGG is an effective and safe method. The HA accelerates the graft healing and reduces the postoperative complications and side effects.

12. Weigelt PH, Fuller GM, Leboeuf RD. A Model for the Role of Hyaluronic Acid and Fibrin in the Early Events during the Inflammatory Response and Wound Healing Department of Human Biological Chemistry and Genetics, University of Texas. 1986.