Aim: To measure and compare the facial soft tissue thicknesses (FSTT) between skeletal class I and class II patients.

Materials and methods: The sample consisted of lateral cephalograms of 120 patients (60 females and 60 males) of 18–30 years. These were subdivided into groups I, II, and III (n = 40 each) consisting of individuals with skeletal class I, mandibular retrognathism-induced skeletal class II, and maxillary prognathism-induced skeletal class II, respectively. Selected digital cephalograms were imported into the Nemoceph software (Nemotec, Spain) and calibrated. The thickness of the facial soft tissue was assessed and compared at 10 anthropological landmarks.

Result: Significant differences between the study groups were noted with respect to the mean Gls-G, Sn-A, and St-U1 values. In addition, sexual dimorphism was also noted.

Conclusion: Given the significant variation in the FSTT among the study groups, it is vital that the clinician in addition to accounting for the skeletal malocclusion also considers the soft tissue dimensions while formulating the treatment protocol.

Clinical significance: The differences among different skeletal malocclusions may be taken into account in patients undergoing orthodontics or corrective jaw surgery, both during diagnosis and treatment planning.

The human face is the most characteristic and discernible part of the human body. We express a range of human emotions with our faces. Attractiveness is judged according to the appearance of the face. To a large extent, social acceptance often depends on facial appearance. Beauty and health are ascribed to an attractive face, combined with feelings of social accomplishment, intelligence, and happiness. The face is of crucial significance for interpersonal communication and social contact, and our first memory of a person is related to the image of their face.1

A proportionate relationship between the different structures of a face is the key to its esthetic and pleasing appearance.2

Several factors are responsible for determining the facial profile of an individual including the facial soft tissue thickness (FSTT) and the dental and skeletal characteristics.3 Face contours are traditionally considered to be a result of the position of dental and skeletal tissue followed by the soft tissue. Over time, there has slowly but inexorably been a paradigm shift from the conventional analysis of the hard tissues of yore, to include soft tissues.4 Muscles, subcutaneous fat, soft tissue, and skin can develop proportionately and disproportionately corresponding to underlying skeletal structures. There can be variations in the thickness, length, and tone of the soft tissue, all of which affect the entire facial esthetic.5

Improvement in facial appearance has long been recognized as the most important motive for patients to accept orthodontic treatment. An indispensable element for understanding facial esthetics is an appreciation of the relationship between the facial bones and the soft tissue. It was previously thought that the configuration of the soft tissue profile was primarily related to the basic skeletal configuration. However, there have been reports to indicate that the soft tissue acts independently of the basic dentoskeletal base, since the soft tissue is very variable in thickness, and is considered to be the main factor in determining a patient’s final facial profile.6

The major treatment outcome expected through orthodontic/orthognathic treatment for any dentofacial deformity would be the restoration of the functionality and the facial characteristics.8 A harmonious soft tissue profile can often be challenging owing to the variability in tissue tension and thickness.

The position and relationships of facial structures are influenced by differences in the characteristics of the overlying soft tissues including its length, thickness, and tone. These variations between the soft and skeletal tissues often lead to disassociation between the facia l appearance and the underlying bony structures. These variations in turn can change the treatment strategy into a wide range of cosmetic and orthognathic surgeries. Particularly during orthognathic surgery, a clinician must be cognizant of the influence the soft tissue movement has on its underlying skeletal base, as the final treatment outcome largely depends on the final form and position of these soft tissues. Factors such as age and body mass can also cause variation in soft tissue thickness. Thicker soft tissues are relatively less sensitive to their underlying skeletal movements compared to thinner tissues.9

At present, there is a lack of literature exploring the influence of the soft tissue characteristics in determining the therapeutic strategy.

Therefore, this study was planned and designed to measure FSTTs of adult individuals with skeletal class II malocclusion and to compare them with that of individuals having skeletal class I relationships. The data from the present study could aid the clinician in strategizing the appropriate treatment protocol for enabling optimal facial reconstruction.

A total of 120 adult individuals (60 males and 60 females) in the age group of 18–30 years with the class I or class II skeletal pattern were selected for the study from patients who had reported for treatment at the Department of Orthodontics and Dentofacial Orthopedics, A B Shetty Memorial Institute of Dental Sciences, Mangaluru.

The study population consisted of individuals from South Indian states of Kerala and Karnataka. Individuals with craniofacial syndromes, facial scars, facial asymmetry, and with a major illness were not considered. Individuals who have undergone orthognathic surgery/orthodontic therapy were also excluded from the study. A written informed consent was obtained from the selected individuals and after obtaining the clearance from the Institutional Ethics Committee, digital lateral cephalograms of the selected individuals were made using PlanmecaPromax (Planmeca Oy, Finland). The image receptor in PlanmecaPromax is in the form of a charge-coupled sensor chip. 68 kVp, 5 mA, and 18.7 seconds were standardized as the exposure parameters for the digital cephalograms.

These lateral cephalograms were divided into three groups of 40 each based on their malocclusion:

Group I: Skeletal class I malocclusion

Descriptive statistics’ categorical variables were presented using frequency/percentages. Comparison of soft tissue thickness for each of the landmarks between different skeletal classes was made by using ANOVA.

A comparison between the mean of two quantitative variables was carried out through the Tukey’s range test, Student’s t test, and the Mann–Whitney U test. p values %3C; 0.05 were considered statistically significant. 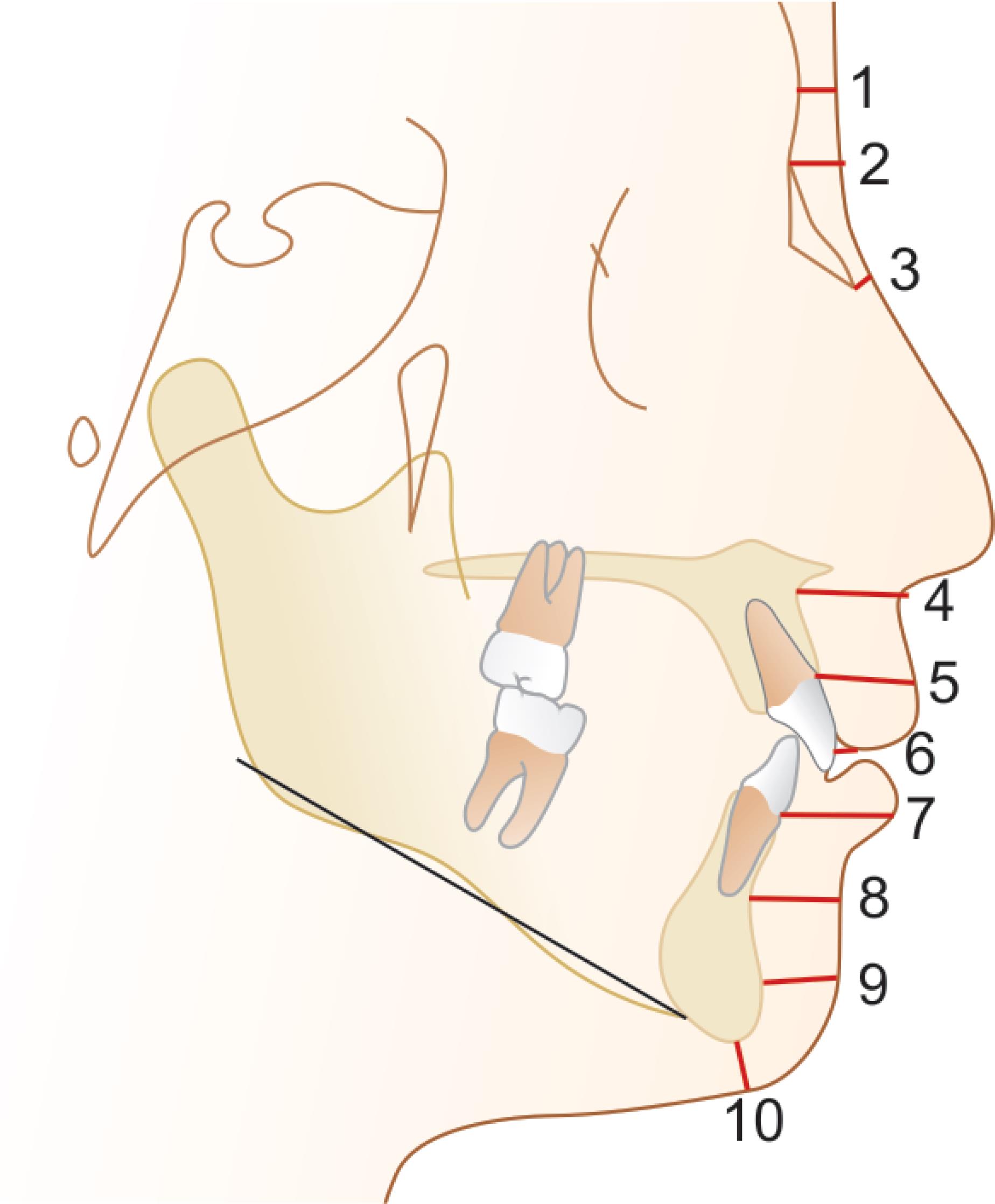 Fig. 2: The FSTT measurements marked on a calibrated lateral cephalogram

The maximum mean value for Sn-A was found in group II. By applying ANOVA with the Fisher’s test, the difference was found to be significant (p = 0.029) between the groups (Fig. 4). 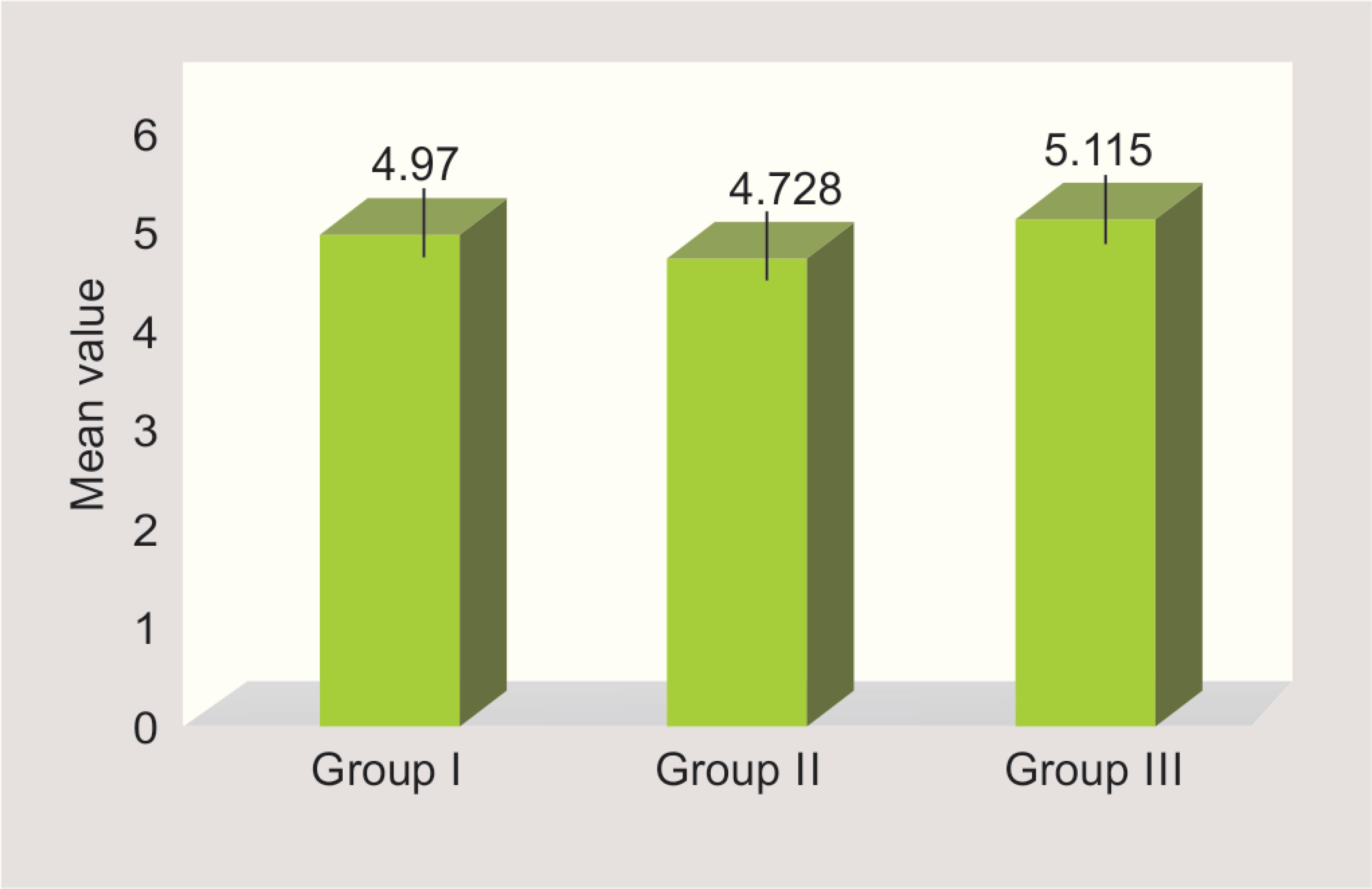 Fig. 3: Comparison of mean Gls-G among the three groups 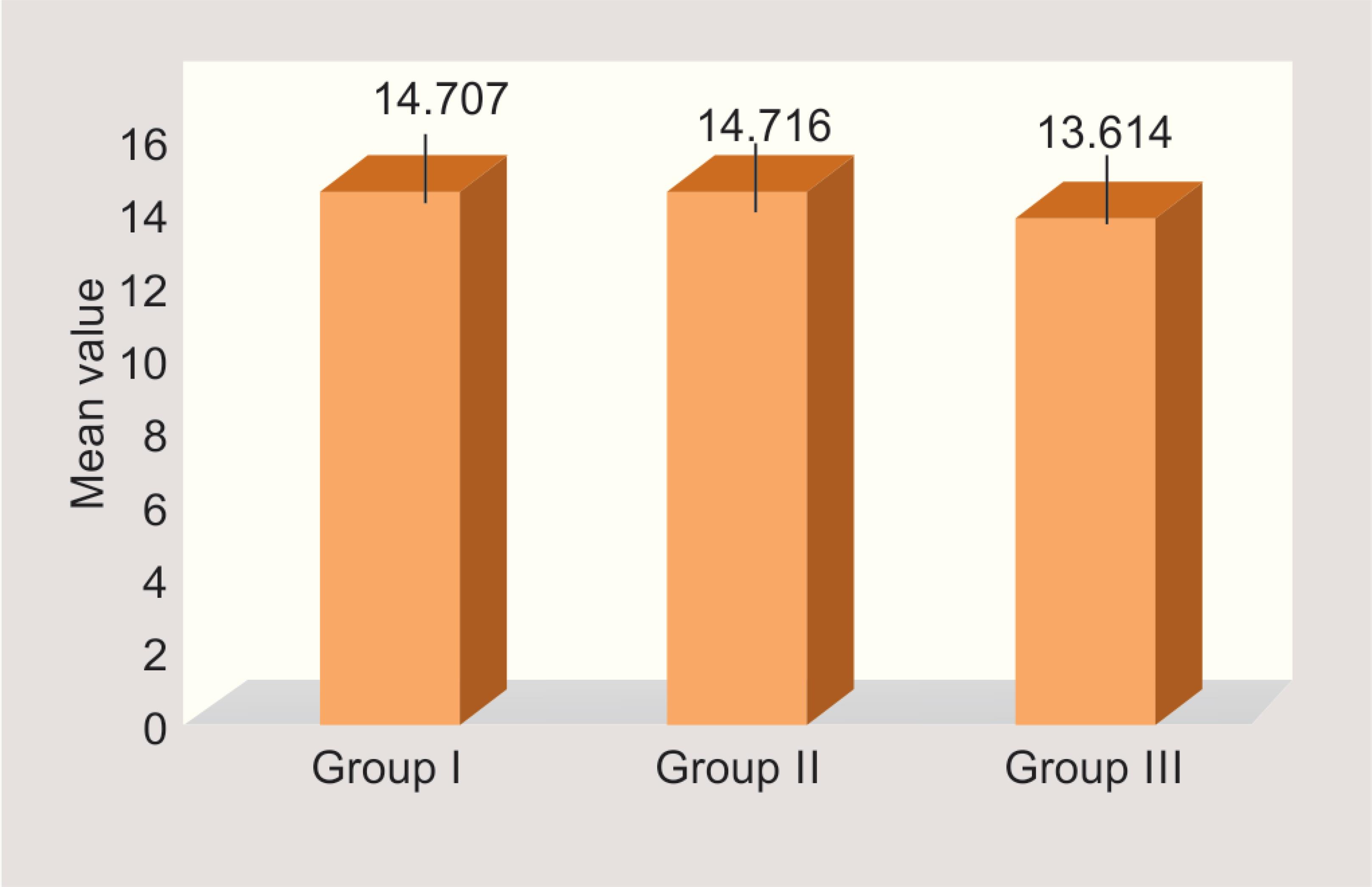 Fig. 4: Comparison of mean Sn-A among the groups 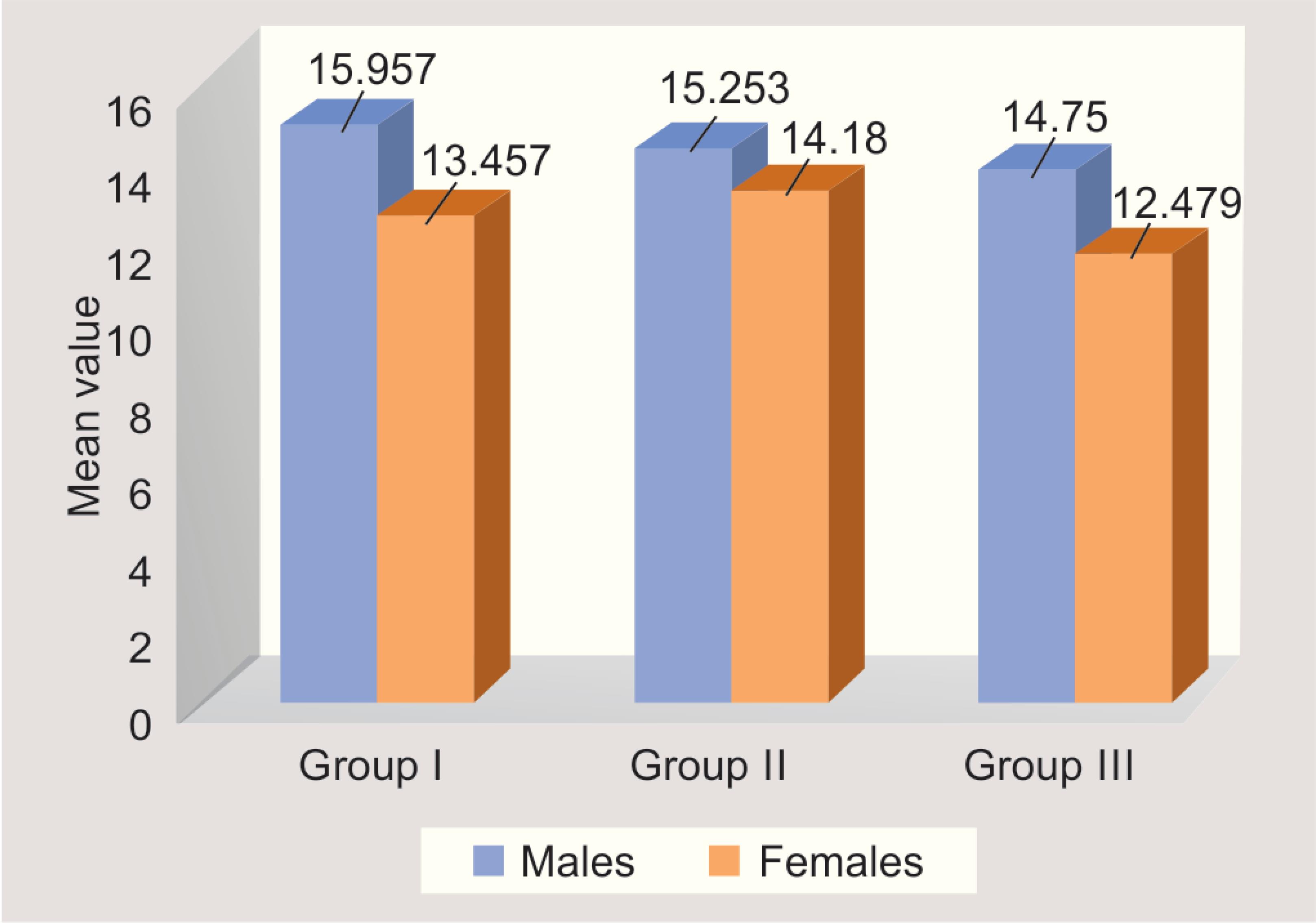 Fig. 5: Comparison of mean Sn-A among the groups in males and females 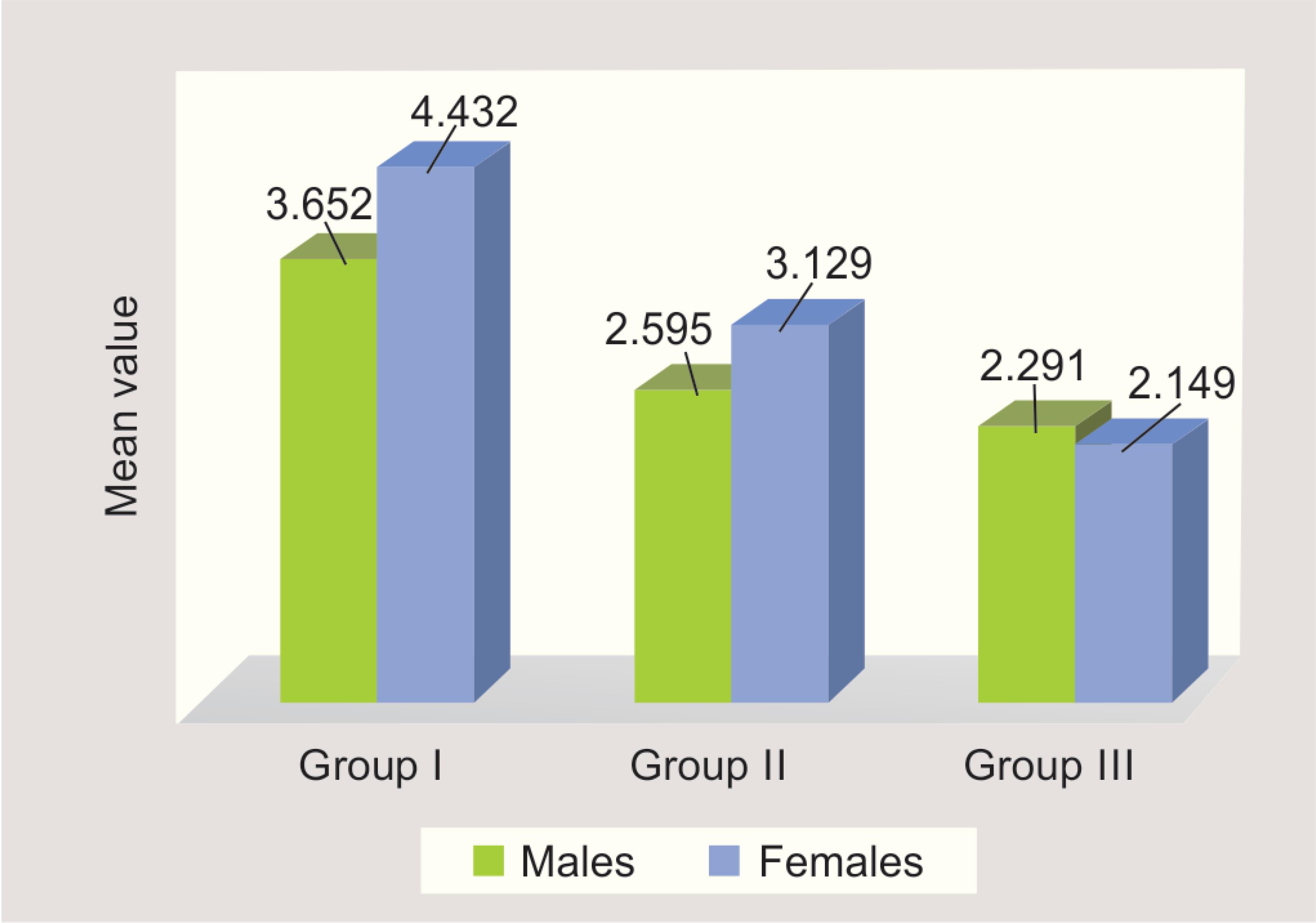 Fig. 6: Comparison of mean St-U1 among the groups in males and females

The difference in the mean value for St-U1 in males was significant (p < 0.001) between the three groups.

These differences among the various malocclusions may be taken into account in patients undergoing orthodontics or corrective jaw surgery, both during diagnosis and treatment planning.

Craniofacial soft tissue thickness (CFSTT) studies have been carried out to create databases to act as quantitative guides in craniofacial identification and facial approximation. Studies similar to the present study have been conducted using various methods such as CBCT, MRI, CT, ultrasound,10 roentgenography using lateral cephalograms, and also needle depth measurements on cadavers.11 The lateral cephalometric analysis of soft tissues allows examination and measurement of soft tissue landmarks of the facial profile in vertical and horizontal dimensions.12 In this study, we have used lateral radiographs for measuring CFSTT at 10 distinct landmarks. This method was used so that subjects are scanned in an erect posture, which allowed an undistorted view of the facial soft tissues. One disadvantage of this method is the radiation exposure. The radiographs were taken at the beginning of orthodontic treatment for use as a diagnostic aid.

Therefore, the construction of a database on soft tissue thickness of a particular population is required. This will help in obtaining an accurate facial reconstruction.

Soft tissues do not form a layer of equal thickness, which simply shapes the configuration of basic dental and skeletal structures. The facial profile reflects the variability of soft tissue thickness and should be a factor in the diagnosis and the planning of orthodontic treatment.14

The orthognathic surgery is mostly undertaken by patients in the second and third decades of life15,16 to improve facial esthetics and remedy malocclusions, which is reflected in the age group of the present study sample (18–30 years).

Although, the present study showed a gender-based difference in the soft issue thickness (greater thickness in men than women), a statistically significant difference was not seen in all the assessed points of each study group. A similar gender-based difference was noted by Uysal et al., who found significant differences at labrale inferius, labrale superius, pogonion, and menton. Similar gender-based differences were obtained by Basciftci et al.19 and Hamdan.20 Li-Id has the highest soft tissue depth in all the study groups. The lower lip is often pushed down and outwards if the maxillary anterior teeth is proclined and angulated, which potentially could influence the thickness at labrale inferius, labrale superius, and stomion.

In the maxillary region, a compensatory soft tissue build-up was noted for groups II and III, while group I had a relatively thinner depth of the soft tissue, which is in accordance to Wang et al.23

The upper face region (Gls-Gl, Ns-N, and Rh) did not show any significant differences among the study groups in the Utsuno et al. study, suggesting that there is no variation in the soft tissue depth when it is tightly adherent to the bone.24 Increased body mass can influence the thickness and depth of soft tissues. Thus, the lack of consideration of the body mass index (BMI) is a major limitation in the present study.

Soft tissue thickness varied significantly among the study groups. Notable differences were seen at labrale inferius, labrale superius, and stomion and in both males and females. Sexual dimorphism was noted. Men had a greater soft tissue thickness than women in all sites. Soft tissue differences must be considered as a major criteria while formulating orthodontic/orthognathic treatment strategies. The results of the present study reinforce evidence of a sophisticated and strong relationship between soft tissue thickness of the face, skeletal pattern, gender, and facial pattern.