Aim: The aim of this study was to measure the stress distributions on the temporomandibular joint (TMJ) due to the face mask appliance using different levels of forces and different angulations.

Material and methods: A three-dimensional finite element model of the craniofacial complex was constructed from a cone-beam computed tomography (CBCT) scan of a patient, with the help of the Mimics software. The forces were applied on the hooks and the anchorage was taken from the chin and the forehead. Four different force directions were applied—0, 10, 20, and 30° from the occlusal plane with each having three different force levels, 800 g, 1000 g, and 1200 g (combined force on both sides). The stress distribution of TMJ was analyzed.

Conclusion: On the articular disk, condylar cartilage, glenoid fossa, and condyle, stresses increased with increase in load. However, with an increase in angulation for the given load, the stresses reduced gradually.

Clinical significance: The results indicate that the maxillary protraction appliance has a reactionary force on TMJ. Stresses induced by facemask appliance due to increased forces with low angulation could be a factor in temporomandibular joint disorders (TMDs).

The purpose of orthodontic intervention in children with varied malocclusion is to achieve a balanced facial profile with an acceptable occlusion.1

The term “growth modulation appliance” refers to different appliances designed to guide the position of the mandible or maxilla in order to transmit favorable forces to the basal bone and the dentition. These appliances are used to stimulate and redirect the functional forces to achieve changes in the craniofacial complex. For patients with a class III skeletal malocclusion, the use of maxillary protraction appliances to correct maxillary deficiency and the use of chin cup to treat mandibular excess have been documented in the orthodontic literature.2–4 One of the appliances used commonly to treat class III malocclusion due to maxillary deficiency is the face mask.

Its conventional design was introduced by Dr Jean Delaire and it consisted of a forehead support, chin cup, and a metal frame. To protract the maxilla, the anchorage units used are the mandible and forehead.5 Usually 800–1000 g of orthopedic force is recommended to protract the maxilla and 70–75% of this force gets transmitted to the temporomandibular joint (TMJ).6 Hence, the effect on the TMJ must be considered when using such heavy intermittent orthopedic forces.

Use of orthopedic forces leads to a complex biomechanical response on bone. The use of the finite element method has enabled us to evaluate certain biomechanical characteristics such as stress and strains, when external forces act upon living biological structures through a simulated model.

In orthodontics, it has been used to analyze the biomechanical effects of different treatment modalities. The use of FEM in orthodontics has several advantages. It is a noninvasive technique and can measure the amount of stress and strain at any point on tissues like alveolar bone, periodontal ligament, teeth, and craniofacial bones through a simulated model.

The magnitude and direction of a force can be varied to simulate various clinical situations and since the process does not affect the physical properties of the material being studied, the study can be repeated numerous times.7 This method is an approximation method to study the three-dimensional stress distribution and deformation of the structures on which forces are applied. 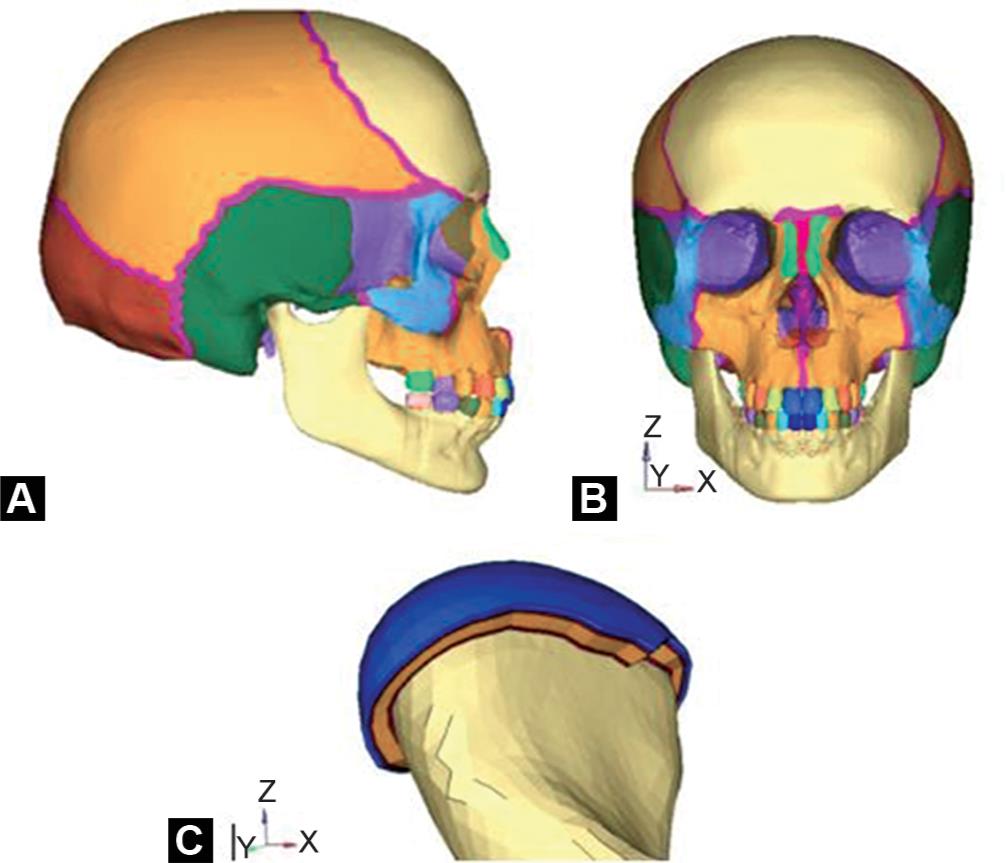 Figs 1A to C: (A) Lateral view; (B) The frontal view; (C) Modelled articular disk

A three-dimensional finite element model of the craniofacial skeleton was made, which included the articular disk using data from a cone beam computed tomography (CBCT) scan of a patient obtained from the archives of the Department of Oral Medicine and Radiology from the Faculty of Dental Sciences, Ramaiah University of Applied Sciences. 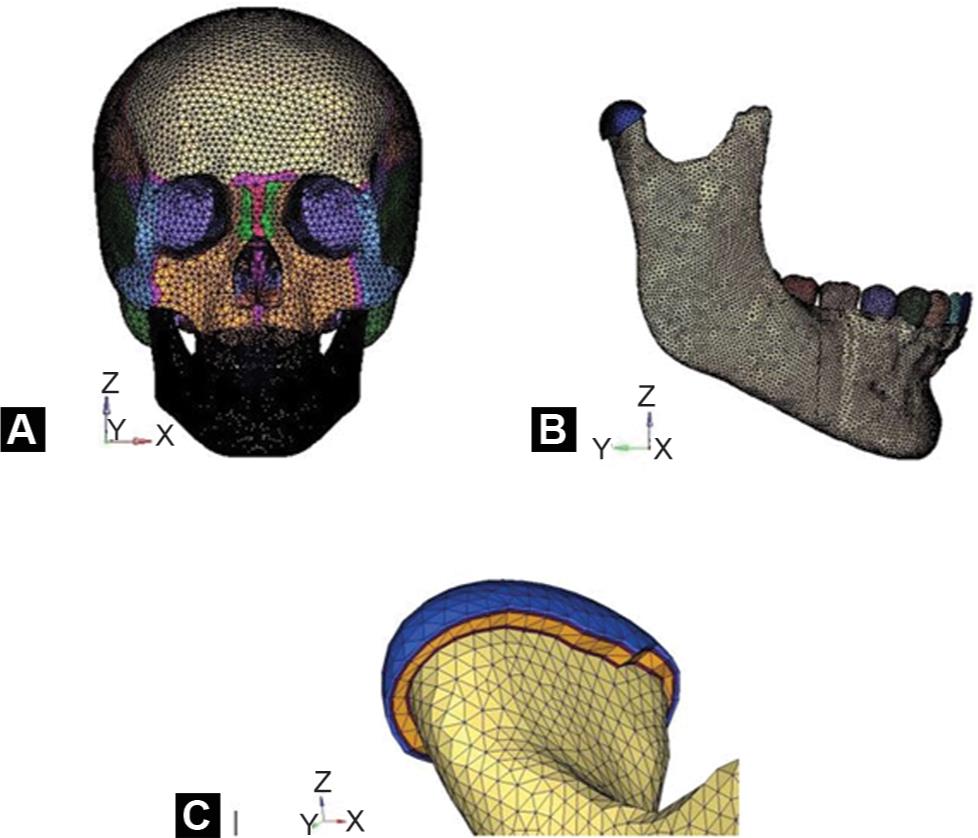 The finite element analysis (FEA) was carried out using the Ansys software version 12.1. The prepared models were processed using the FEA, and the results were visualized as von Mises stress maps (in mega pascals). The amount of Mises stresses generated in different parts of TMJ were calculated and represented with different colors. 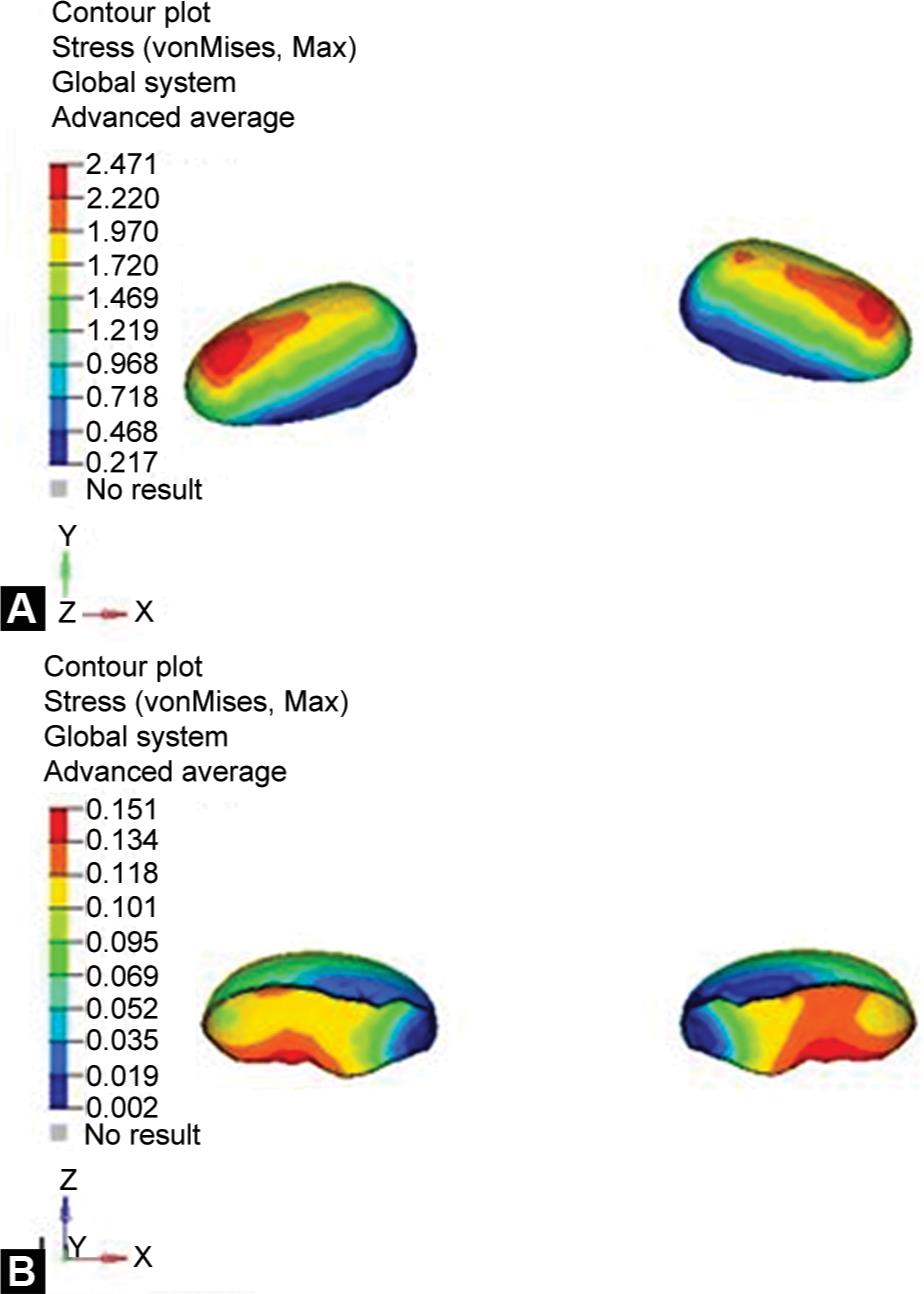 There are various methods by which stress can be measured on the TMJ, such as reflection photoelasticity, FEA, viscoelastic FEA, and boundary element method (BEM). However, FEA is considered to be one of the best methods of measuring stresses suggested in the literature.12–14 In a study done by Citarella et al., the stress analysis using the finite element method and the boundary element method was compared and it was concluded that the finite element method (FEM) method has the advantage of high versatility over the BEM method.12 In a study done by Christophe Meyer et al., stress analysis was carried out using reflection photoelasticity. In this method, the mandible was coated with a layer of photoelastic resin and deformation was measured based on the displacement of the resin. However, this method only measured the stress in two dimensions and in a single plane.13 Hence there is a need to measure the stress distribution in three dimensions replicating the clinical scenario, which is possible only using FEM. This method is a complex computational technique that can be used to assess solutions of boundary-value problems seen in engineering. This method makes it practical to evaluate the biomechanical components such as stress, strain, and displacements in biological structures, which arise from various types of external forces.

In this study, a finite element model was constructed for the evaluation of the stresses induced on the condyle, glenoid fossa, and the articular disc caused due to maxillary protraction appliance such as face mask with different force levels and different angulations.

The condylar position with respect to the glenoid fossa and articular eminence is one of the etiologic factor of temporomandibular joint disorders (TMDs). Hence, any changes in the position of the condyle and thereafter any biomechanical alterations of the articular disk during face mask therapy may lead to internal derangement of the TMJ.

The effect of chin cup therapy on the TMJ has been assessed in numerous studies done by Deguchi et al. in 1998, Gökalp et al. in 2000, and Gökalp and Kurt in 2005.15–17 However, only in a limited number of studies the effect of face mask therapy on the TMJ has been investigated. It is a well-known fact that for the treatment of class III malocclusion due to maxillary deficiency, the face mask is the device most commonly used. The Face mask applies anteriorly directed force on to the maxilla and derives its support from the chin and the forehead. In a study by Grandori et al. about maxillary protraction, the force that was generated by the chin part of the face mask was ignored whereas the force transmitted to the TMJ by the face mask is reported to be 70–75% of the protraction force applied on the maxilla.18 Yu et al. in 2007 evaluated the effects of maxillary protraction with and without rapid maxillary expansion and reported that ignoring the force transmitted to the chin by the face mask was a drawback of the study and suggested that this point should be taken into account for the accuracy of further studies.19 Hence, in this study force generated by the face mask was simulated and its effect on TMJ was evaluated.

During any orthopedic therapy, the optimal force is considered to be the lowest force applied for the least duration that produces the greatest skeletal movement and least dental movement.20 In orthopedic orthodontics, finding the optimum force leading to adequate results has always been an issue. Studies done by Tanne et al. has shown that differences in magnitude, direction, and duration of force can lead to different patterns of displacement and distribution in maxillofacial structures, which leads to unexpected results and different stress patterns.21

In this study, for a given angle, the stress increased with the increase in applied force (Figs 5 and 6), which was similar to the study done by Liu et al. in 2013 in which stress distribution was analyzed from forces generated by maxillary protraction appliance. A 3D model of maxillary protraction device was established and different forces from 3 N to 6 N at an angulation of 37° from the occlusal plane was applied at the chin to measure and analyze changes in stress and displacement in TMJ using the finite element software. At the same angle, the stress in the head and neck of the condyle and articular fossa increased with the applied force. Hence, it was concluded that stress in the TMJ increased with applied force at the same angle.27 In the present study, stress on the TMJ decreased when the angle of the force direction increased (Figs 5 and 6), which was in agreement to a study done by Dong et al. in 2013 in which the influence of different reactive force direction of protractions on TMJ was analyzed by the FEM method. The force pattern of the maxillary protraction appliance was imitated and the force of 5 N was applied on the chin and the direction of force was varied from 22° to 49° relative to the occlusal plane. The stress distribution on TMJ was analyzed. The contact stress on the maxilla decreased with the angle of the force direction increased from 22° to 40°. The stress on the condyle decreased when the angle of the force direction increased. Hence, it was concluded that stress on the TMJ decreased when the angle of the force direction increased.28 The probable reason for this could be that the reactionary force (upward and backward force exerted at chin), when the angle is increased, is parallel to the long axis of the mandible (body and ramus together) compared to the reactionary force that will be directed only backward in case of 0 angulation. The possibility of the face mask being a deleterious factor for the TMJ should also be evaluated by the intensity of stresses added by this appliance. In this study, the maximum stress for the condyle along with glenoid fossa, articular disc, and cartilage was less than the elastic limit of the structures; however, it was found to be greater than the forces generated by the normal functioning of the jaws. Hence, stresses induced by the face mask appliance could be a factor in TMDs.

In this study, finite element models were used to simulate only the force from the maxillary protraction appliance but not from the stretch of soft tissues such as muscles, ligaments, and skin. This was an in vitro simulation of the clinical situation and in the actual clinical scenario, anatomical variations in the morphology of the condyle, glenoid fossa, and mandible should be accounted. These are the limitations of this study.

A pattern of stress is created, which indicates that facemask therapy for maxillary protraction has a reactionary force on the TMJ. On the articular disc, cartilage, glenoid fossa, and condyle stresses increased with increase in load. However, with increase in angulation for the given load, the stresses reduced gradually. The maximum stress was observed for 1200 g load and at 0° angulation condition.