Aim: The reliability of panoramic radiograph (OPG) in treatment planning for dental implant placement is questionable. To assess the reproducibility and accuracy of panoramic imaging by evaluating the vertical and horizontal magnification factor (MF) at different regions of maxilla and mandible in manual and digital OPG.

Materials and methods: The MF of the OPG at incisor, premolar, and molar regions taken through manual and digital radiograph unit with Asahi unit (MF 1.2–1.3×) and Planmeca unit (MF 1.2×), respectively, was assessed both horizontally and vertically. The measurement was made using Vernier caliper for manual and Microdicom Otic software for digital OPG. Measurements were done using two observers.

Conclusion: The present study shows vertical MF was constant with digital OPG, while horizontal MF was similar to manufacturer’s specification in manual OPG, especially in molar and premolar regions.

Clinical significance: Magnification of image is normal occurrence in any radiographic image. In panoramic image where the focal spot–film distance is specific, the manufacturer’s MF could be used appropriately to minimize errors.

Periapical radiographs and OPGs are the commonly used methods for evaluation of teeth and adjoining structures. Presently, the implants are widely used in the rehabilitation of edentate areas which requires radiographic examination to enable the proximity of anatomical structures, the quality and quantity of bone, and the presence of any bone defect.1–4 To improve the success of implant osseointegration, implant with longer dimension is better than shorter.5 The OPGs are readily available with low cost which helps in viewing various structures of maxilla and mandible.

Beason and Brooks,6 with survey conducted in southeast Michigan, found that conventional tomography was not used by more than 90% of dentists, while around 65% had never used computed tomography during preimplant bone assessment which could be related to either its high cost or its limited facilities compared to panoramic radiography. An OPG is a narrow beam rotational tomograph with a predefined focal trough, providing information on the relative position of the inferior alveolar nerve and the maxillary sinuses, approximate height of bone, vital structures, and pathological conditions if present.7 Magnification errors of image and the lack of cross-sectional information are the disadvantages of OPG in treatment planning. However, single radiographic examination has been widely used in implant treatment planning at present.8 The major disadvantages of panoramic radiography are an erratic misrepresentation of the visualized structures and lower resolution. Magnification occurs in both vertical and horizontal directions and the ratio need not be the same in all the regions.

Since, OPG is widely used in implant assessment, its reliability needs to be assessed. Panoramic images can be either manual or digital. An image is assumed to be digital when consisting of separate (distinct) elements.9 Each element is called a “picture element” or pixel. Until now studies were done to assess magnification error as a whole and not at individual sites. To evaluate the diagnostic reliability of OPG in implant presurgical assessment, the present study was done to determine the vertical and horizontal magnification in three different sites, anterior, premolar, and molar regions. The vertical and horizontal magnification obtained was also compared between the manual and digital radiographs and whether the manufacturer’s magnification factor (MF) is similar to the magnification obtained from the images at all the sites.

This study was conducted using the records which were present in the department as an implant treatment protocol, and no human subjects were utilized for the purpose of the study. Manual and digital OPG and records taken during treatment of implant supported prosthesis in Sri Ramachandra Medical College, Tamil Nadu, were utilized for the present study. The sample size was 18 digital OPGs with 39 implant sites assessed, while for manual 23 OPGs with 49 implant site were assessed (Table 1). Three different sites of OPG, namely, incisor, premolar, and molar implant sites were taken for measurement. Manual OPG taken from Asahi Unit with MF, 1.2–1.3×, and digital OPG taken from Planmeca Unit with MF 1.2× were used for the study.

Length and width of implant in incisor, premolar, and molar region were measured using Vernier caliper for manual and Microdicom Otic software for digital OPG (Fig. 1). Measurements were done using two observers. The MF of each site was measured using the formula: implant radiological length or width divided by the implant real length or width for vertical and horizontal, respectively. The MF obtained from OPG was compared with manufacturer’s MF at each site.

The collected data were analyzed with SPSS 16.0 version. To describe about the data, mean and standard deviation were used. To find the significance difference in the samples with manufacturer MF, paired t test was used. 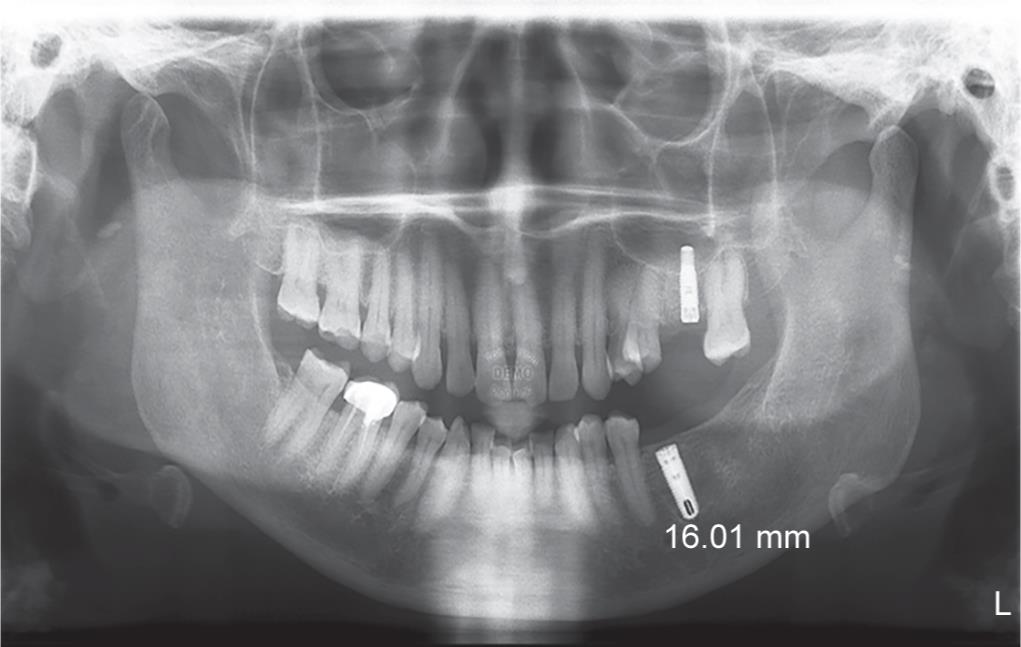 The need for accurate measures in implant planning has produced changes in the field of dental radiology.10 The OPGs are widely used as prediagnostic tool due to its cost-effectiveness but the reliability is questionable.11 The present study utilized the digital and manual OPG to evaluate its diagnostic reliability in implant treatment planning. Digital radiograph has the advantage of data acquisition and analysis, which can be done at any period of time, while manual radiograph consumes time for image development, with the problem of data storage for prolonged time due to the damage of the film.9 Previously studies have been done to assess the magnification of panoramic films which were either site-specific or direction-specific, but they have not compared both aspects together and with manufacturer’s MF. Hence, in the present study three different sites of OPG, namely, incisor, premolar, and molar region, were used, additionally both the vertical and horizontal magnification were evaluated and was compared with manufacturer’s MF.

Ball bearing, gutta-percha points are previously used in assessing the distortion in OPG,12 but utilizing MF is the simplest method, which was evaluated in the present study. In order to evaluate the measurement of implant in digital OPG, Microdicom software was used. Microdicom is application for primary processing and preservation of medical images in DICOM format which was used for measurements in this study. The obtained measurement from radiograph was checked with recorded data of implant size to obtain the magnification. In radiography, MF is ascertained by the manufacturer by the ratio of the source-to-image-receptor distance to the source-to-object distance. The present study showed that mean vertical MF determined in digital OPG was found to be constant and similar to manufacturer’s MF in molar and premolar regions; but in incisor region, it was less than manufacturer’s MF value. Whereas manual OPG showed significant difference in vertical MF (t test), and the frequency of image distortion was more, which leads to incorrect measurement of bone length from specific anatomic landmark. Previous study has shown more magnification with respect to premolar region,13 while the present study showed distortion with respect to the incisor region.

From the present study it has become clear that digital OPG can be used to assess the vertical magnification using MF provided by the manufacturer to assess the length of implant and the nearby anatomical landmark, but its horizontal MF cannot be used to assess the width as accurately as the length. In case of manual OPG, horizontal MF was more accurate in premolar and molar regions compared to the digital OPG while its vertical magnification is higher than the manufacturer’s MF. Batenburg et al. conducted study on distortion rate of OPGs in edentulous mandible related to the angle, position, and shape, which accomplished evaluation and diagnosis of edentulous mandibles are not perfect with OPG.13 Whereas the present study showed that the OPG can be a reliable diagnostic aid if utilized appropriately according to need of the situation using MF to correctly assess the parameter of the site.

Limitations of the present study were that it was a retrospective based on stored data wherein the implant size was evaluated based on records, i.e., two different radiographs taken from different devices were compared. Within the limitations of the study, considering the vertical and horizontal MF of the OPG, digital OPG can be accurate for the vertical magnification, while manual OPG can be accurate for horizontal magnification in both premolar and molar regions. Present study showed evaluation of the surgical site for incisor with either digital or manual OPG may not be appropriate and other diagnostic aids should be used.

Magnification of image is normal occurrence in any radiographic image. In panoramic image where focal spot–film distance is specific, we could use the manufacturers MF appropriately at sites as discussed in the present study. Considering the vertical and horizontal MF of the OPG, digital OPG would be accurate for the vertical magnification; while the manual OPG would be accurate for horizontal magnification in both premolar and molar regions. Hence, using MF with the OPG is a reliable diagnostic aid in planning the implant placement.

This study was conducted using the preexisting records, which were taken as an implant treatment protocol; and no human subjects were directly utilized. The study conforms to the ethical standards.