Evaluation and Comparison of the Rate of Canine Retraction Using Two Accelerated Orthodontic Treatment Techniques: An In Vivo Study

How to cite this article Ramkumar A, Raghunath N, Avinash BS. Evaluation and Comparison of the Rate of Canine Retraction Using Two Accelerated Orthodontic Treatment Techniques: An In Vivo Study. World J Dent 2020;11(2):105–111.

Aim: The study was aimed at evaluating and comparing the rate of canine retraction using piezocision (PZ) and micro-osteoperforation (MOP).

Materials and methods: A split-mouth study design was used in which the canine of each side of the arch of each subject was divided into the PZ side and the MOP side. After first premolar extraction, PZ was performed on one side and MOP was performed on the contralateral side. Canine retraction on both sides was performed using NiTi closed coil springs. All the measurements were performed by a direct technique with the help of a digital Vernier caliper on stone casts obtained before canine retraction (T0) and after the completion (T1) of retraction. This data of the rate of individual canine retraction in the PZ and MOP groups obtained were subjected to the statistical analysis.

Clinical significance: The need to reduce the duration of treatment and the associated factors is the need of the hour. There is therefore a need to find the best and most feasible approach to accelerate tooth movement with existing biomechanical systems.

Fixed orthodontic treatment involves various types of tooth movement leading to achievement of ideal occlusion. The tissue response that takes place during orthodontic treatment happens on a chemical, cellular, and mechanical level around the tissues involved. The time required for achieving treatment goals is usually 18–24 months.

The number of adult patients seeking orthodontic therapy has increased considerably over the last few years. The demand for shorter treatment duration has set precedent for researchers to look at newer paths to shorten treatment duration without compromising on the efficiency of the treatment.

The introduction of accelerated orthodontic tooth movement (AOTM) with minimally invasive techniques has decreased treatment duration and increased patient acceptance toward treatment over the past decade.

The regional acceleratory phenomenon (RAP) is a local response to a deleterious stimulus. It is a process by which the tissue forms faster than the normal local regeneration by intensifying the various healing stages. This phenomenon makes healing 2–10 times faster than normal physiologic healing.1

There are several methods used for accelerating tooth movement such as corticotomies, periodontal distraction, use of low-level lasers, mucoperiosteal flap surgery, piezocision (PZ), and micro-osteoperforation (MOP).

Piezocision, introduced by Dibart in 2009, is a flapless alveolar decortication procedure, where labial vertical incisions are made through the soft tissue between all teeth, not including the papilla.2 This technique uses microincisions limited to the buccal gingiva that allow the use of a piezoelectric knife to give osseous cuts to the buccal cortex and to initiate the RAP.2

The piezoelectric knife works only on mineralized tissues; it does not harm soft tissues and their blood supply. Hard tissue or soft tissue grafting can be combined with PZ through selective tunneling, which allows for gingival correction.

Micro-osteoperforation is one of the least invasive surgical techniques described for use in conjunction with orthodontic therapy. This involves the production of multiple transmucosal perforations within the alveolar bone, situated in close proximity to the region of the desired tooth movement and in specific configurations, depending on the movement of the tooth required.

Thus, this study was aimed at evaluating and comparing the rate of canine retraction using PZ and MOP.

The study sample comprised of patients reporting to the Department of Orthodontics and Dentofacial Orthopedics, JSS Dental College and Hospital, requiring fixed orthodontic treatment and who fulfilled the inclusion criteria.

The estimated sample size was 15 sites per group. The sample consisted of eight patients. Patients fulfilling the inclusion criteria and accepting to participate in the study were requested to sign an informed consent form.

A split-mouth study design was used where one side of the arch was designated as the PZ side and the contralateral as the MOP side. Ethical clearance was obtained from the institutional ethical committee of JSS Dental College and Hospital, Mysuru. 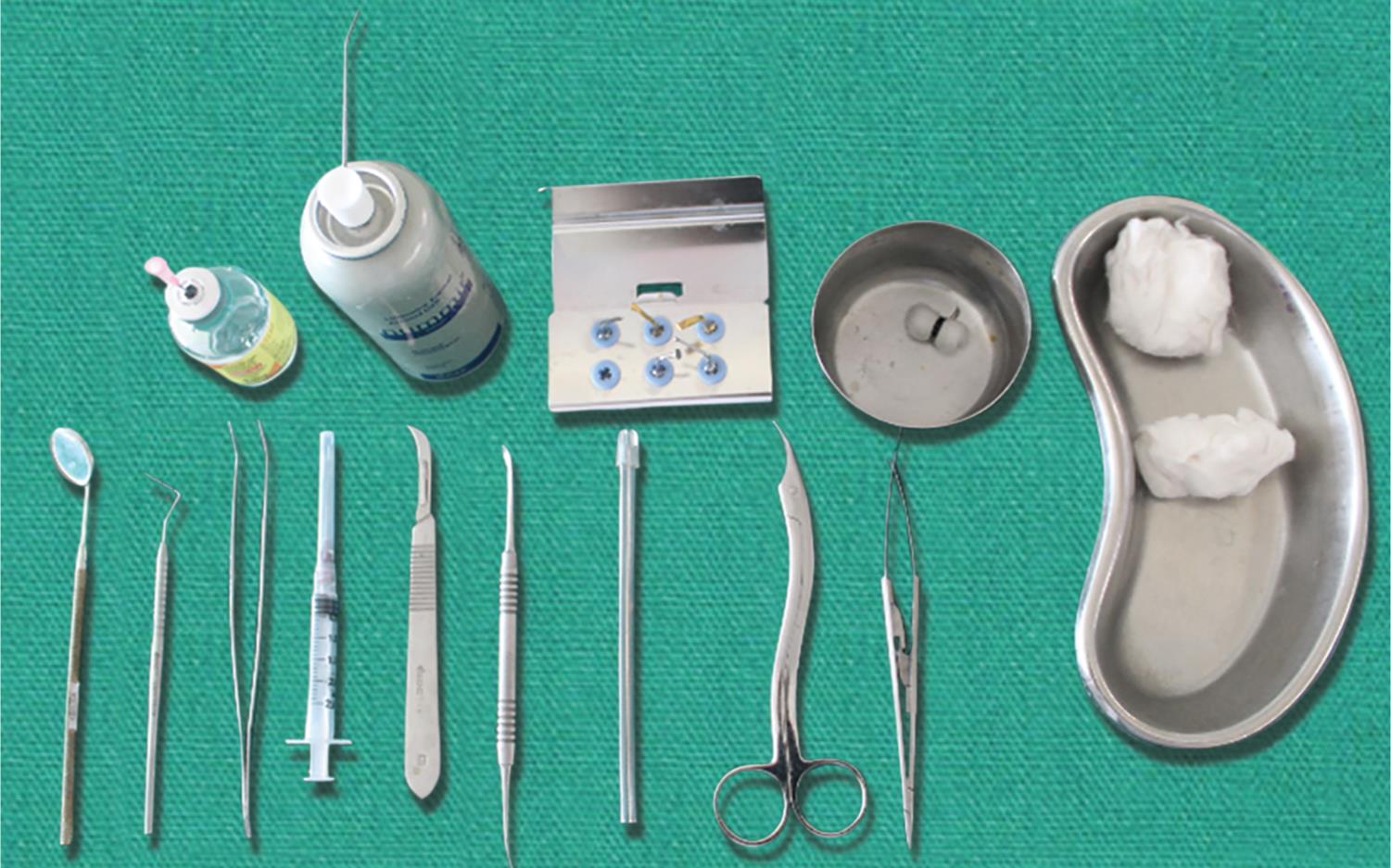 All data were analyzed using the SPSS version 22.0 for Windows Descriptive Statistics were employed in the present study—mean and standard deviation. 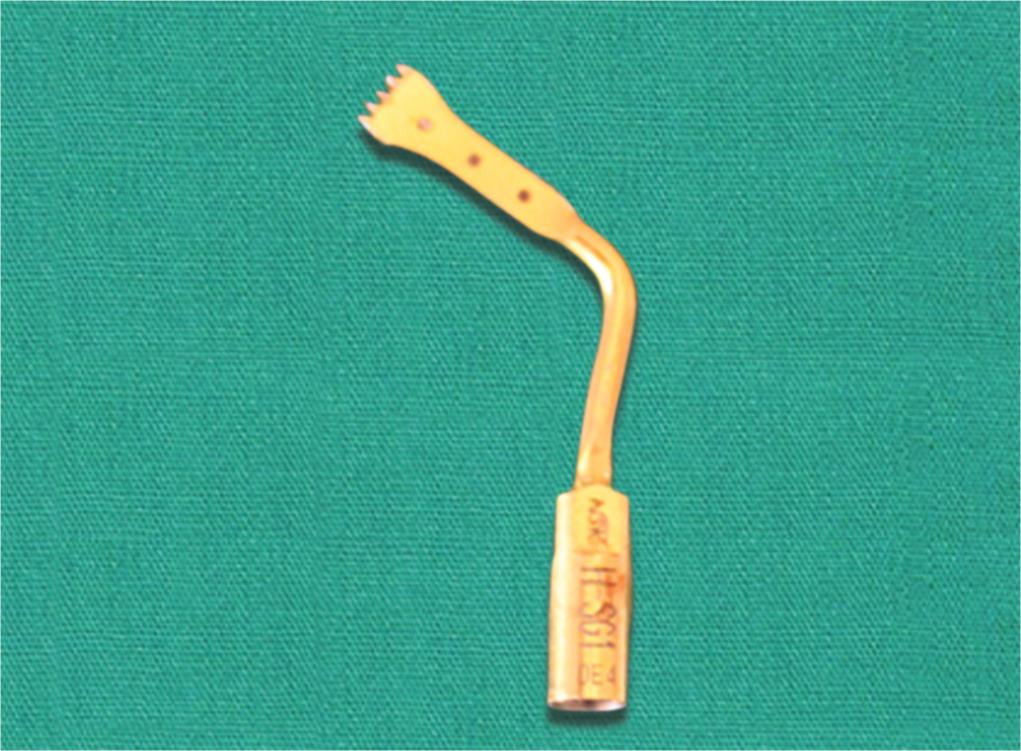 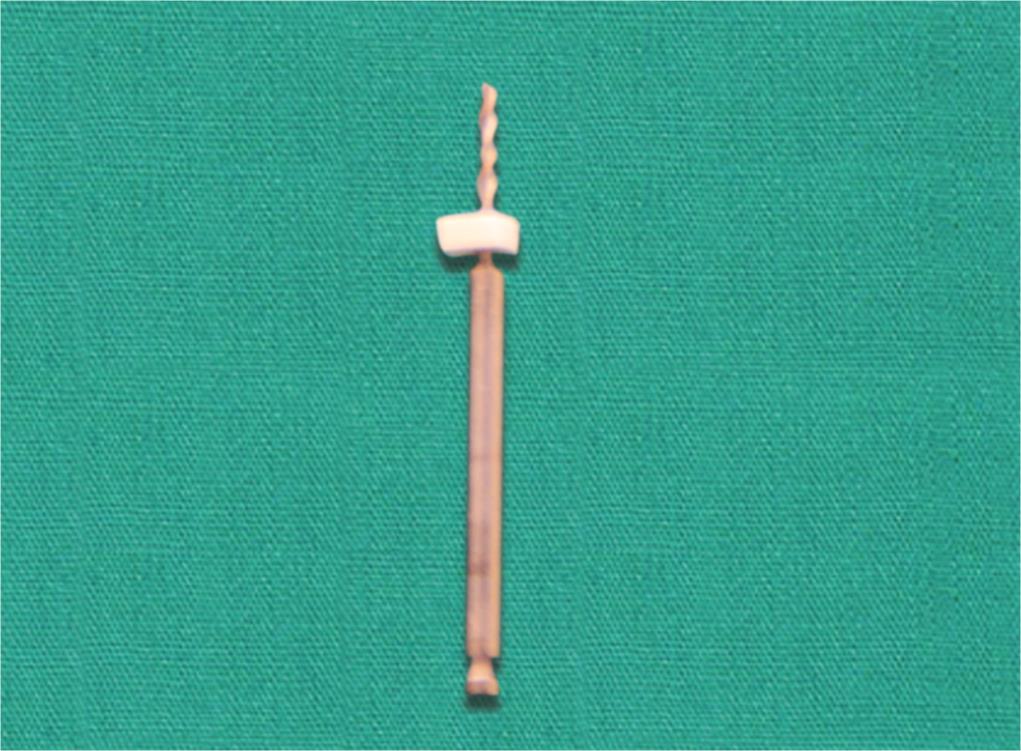 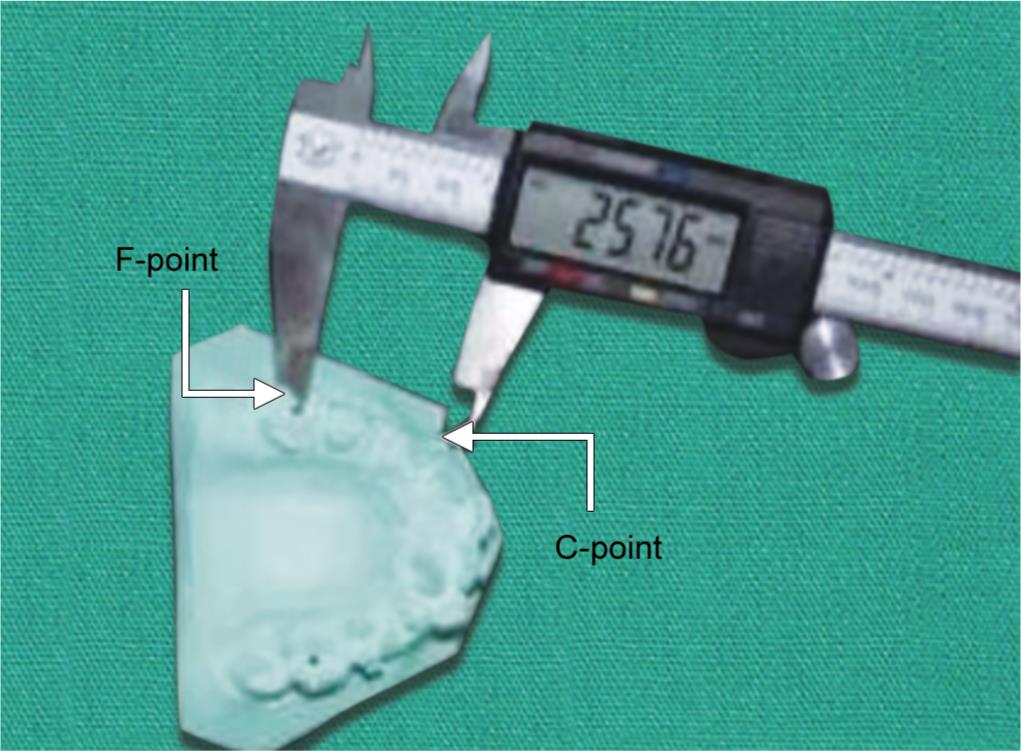 Fig. 4: Measurements performed by direct technique from stone casts, prior to retraction (T0) and post-retraction 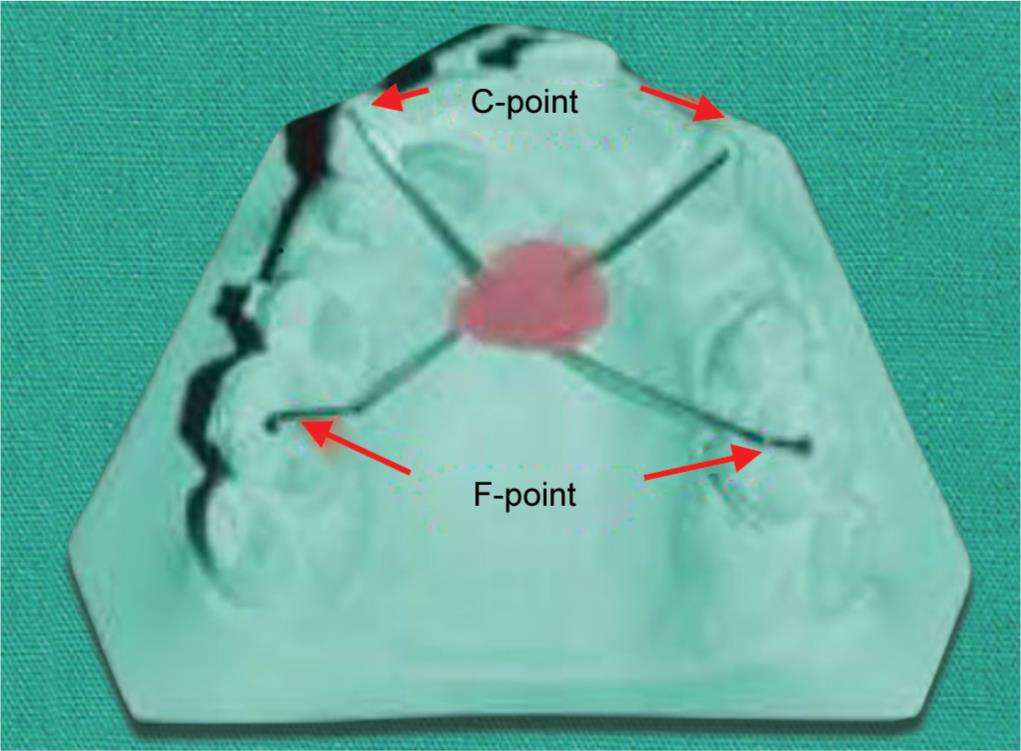 Fig. 5: Acrylic plug corresponding to the F point and the C point on the pre-retraction cast

The independent samples t tests were done to compare the means of two groups of cases. The subjects were randomly assigned to two groups so that any difference in response was due to the treatment (or lack of treatment) and not due to other factors.

The sample consisted of two male and six female patients with mean age 19.6 ± 3.3 years. In this split-mouth study, the sites were randomized and PZ was performed on one side and on the contralateral side, MOP was performed. 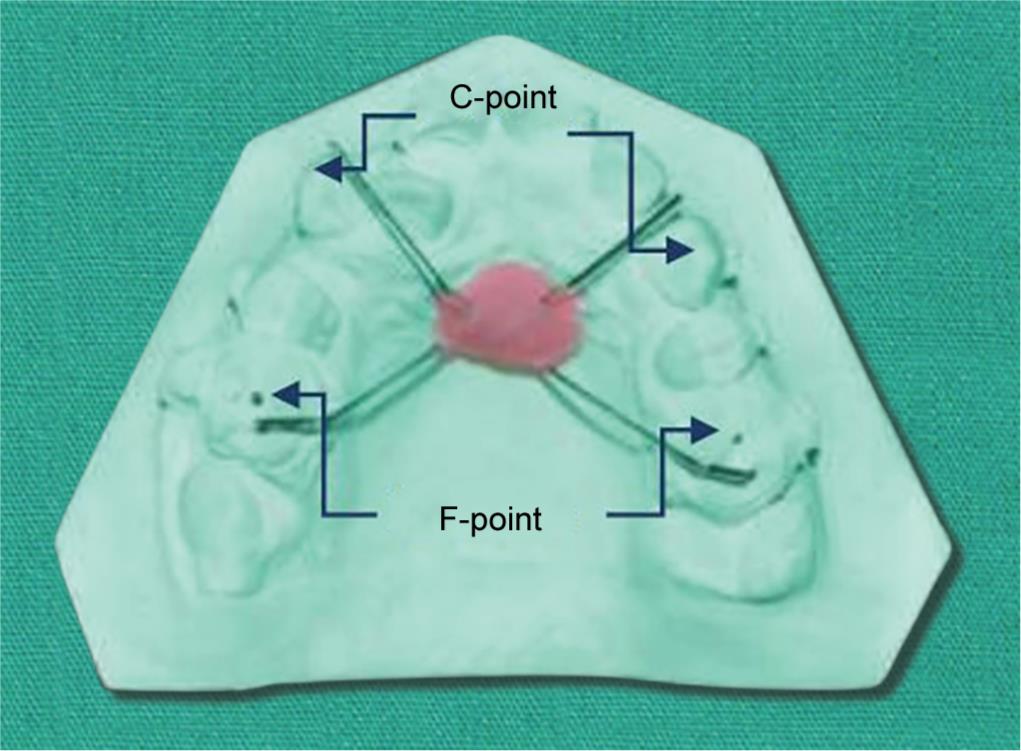 Piezocision was seen to be 1.22 folds faster than MOP.

The goals of orthodontic therapy lie in achieving a pleasing and esthetic face along with stable occlusion. An esthetic smile goes a long way in improving the self-esteem of a person and also helps in building confidence. Orthodontic correction helps in also correcting jaw deformities, which improves the quality of life of the person.

The rate of biologic tooth movement in response to the application of optimum mechanical force is approximately 1–1.5 mm over 4–5 weeks. Therefore, in cases of maximum anchorage cases with premolar extraction, canine retraction usually takes 6–9 months, leading to an overall treatment time of 1½ to 2 years. The orthodontic biomechanics used applies mechanical force to bring about tooth movement by remodeling the periodontal tissues surrounding the teeth. 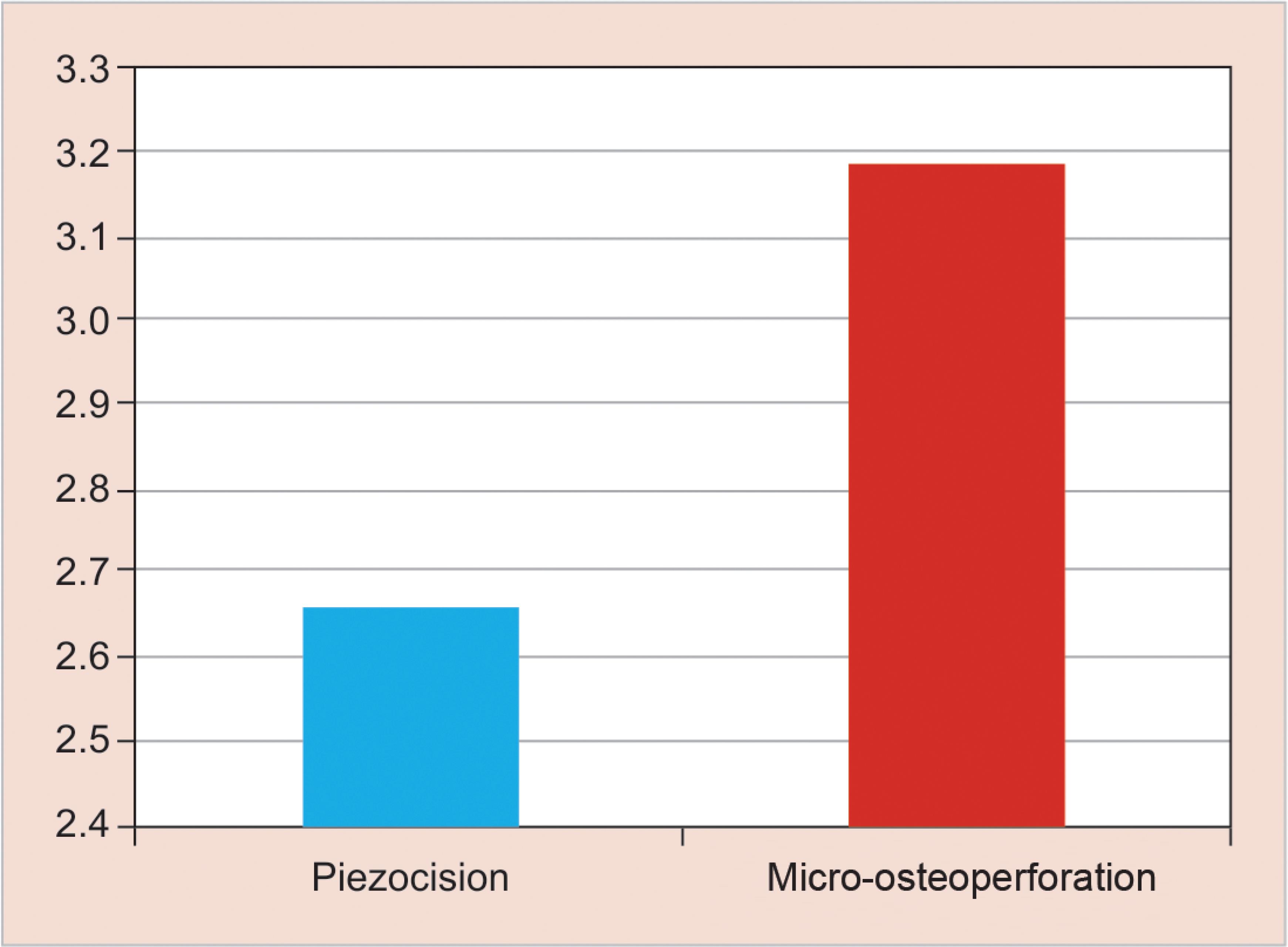 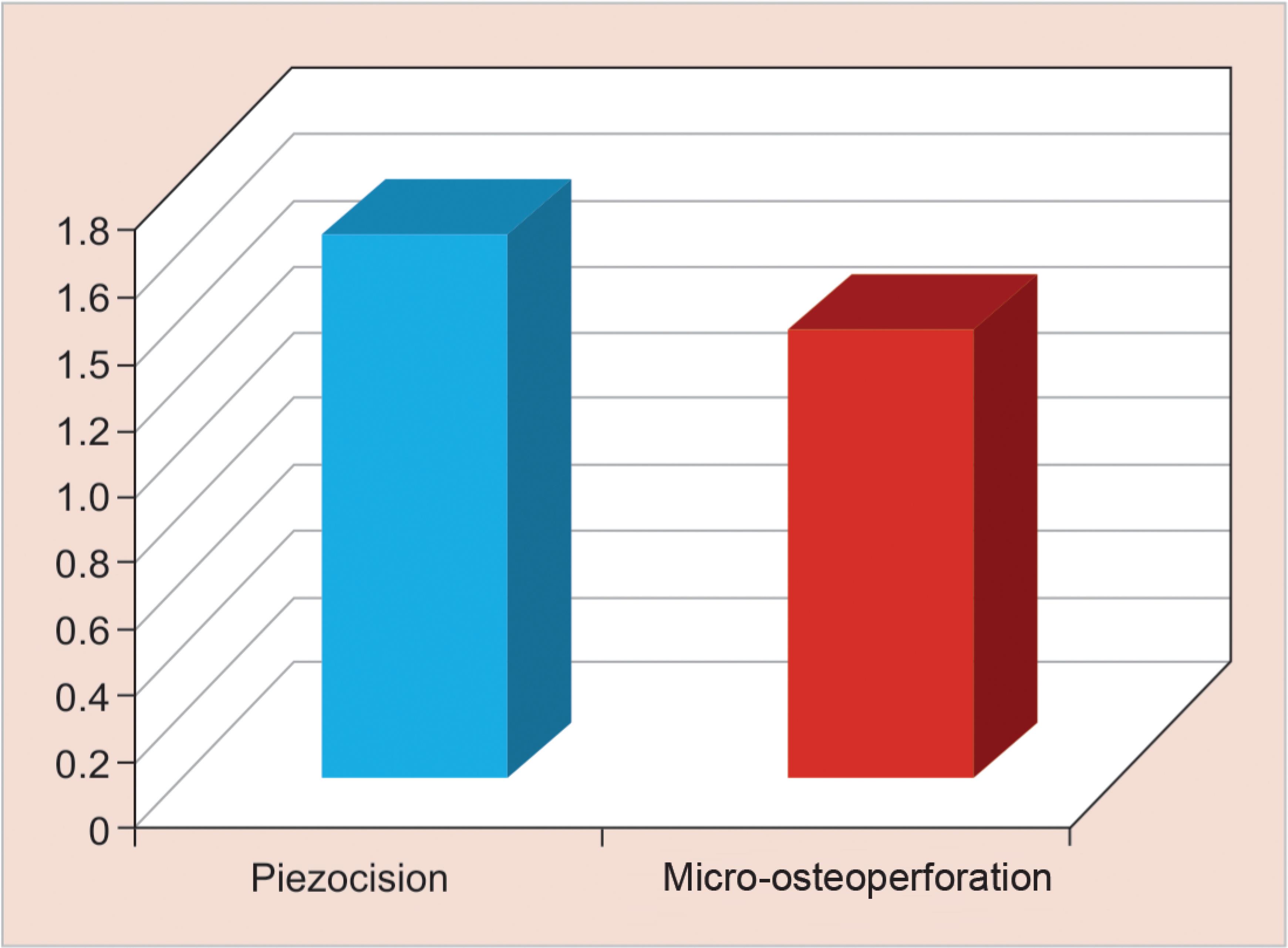 Various techniques using the RAP phenomenon have been investigated, which includes corticotomies, periodontal distraction, PZ, MOP, and biomodulation using lasers. The RAP is a local response of tissues to noxious stimuli by which tissue regenerates faster than normal in a regional regenerative/remodeling process. This is an increased bone response in the form of increased osteoclastic and osteoblastic activity, and increased levels of local and systemic inflammatory markers in areas around the cuts that extend up to the marrow. This response varies in duration, size, and intensity with the magnitude of the stimulus, and it is considered a physiological “emergency” mechanism, which accelerates the healing of injuries that could affect survival. The duration of RAP depends on the type of tissue, and usually lasts for about 4 months in the human bone. This phenomenon causes bone healing to occur 10–50 times faster than normal bone turnover.1

Piezocision and use of a piezotome at specific vibration frequency settings has shown to cause a more widespread and diffuse demineralization accompanied by an increased remineralization effect on the bone in contrast to the bur used in corticotomies. This could be due to the additive effect of osteocytes in response to microvibrations produced by the ultrasonic handpiece at specific settings.

The primary treatment objective in most cases including those with severe skeletal disharmonies is improvement of function as well as achievement of a pleasing profile. Premolar extraction is a relatively common treatment protocol, especially in patients with dental protrusion and dental crowding.

The retraction of anterior teeth is a critical part of bicuspid extraction treatment and should be precisely controlled. The rate of tooth movement gives an idea to the orthodontist about the importance of physiological and clinical changes.

Proffit and Fields recommended the sequential canine retraction for maximum anchorage, stating that this approach would allow the reaction force to be constantly dissipated over the large periodontal ligament area in the anchor unit.

The findings of the present study are discussed below.

To Evaluate the Rate of Canine Retraction by PZ

A study conducted by Aksakalli showed that PZ accelerated canine retraction by 1.53 mm in the PZ group. The rate of retraction was constant over the time period evaluated. This is in agreement with the present study.5

A systematic review conducted by Yi et al. evaluated the efficacy of PZ on accelerating tooth movement. All studies reported accelerated tooth movement after PZ, and three reported a significant reduction of treatment duration post PZ. The results of the present study show that PZ accelerates canine retraction by 1.22 times, which is in agreement with the above study.7

To Evaluate the Rate of Canine Retraction by MOP

The present study showed that the rate of canine retraction on the MOP side was 1.34 ± 0.51 mm/month.

A randomized clinical trial to compare the of rate of tooth movement associated with MOP using fixed appliance therapy by Attri et al. found the mean rate of canine retraction on the MOP side was 0.89 ± 0.17 mm/month in comparison to the control side being 0.63 ± 0.11 mm/month. The results of the present trial indicate that the acceleration of orthodontic tooth movement was seen with MOPs. The present study showed the rate of canine retraction was 1.34 ± 0.51 mm/month on the MOP side. This is in agreement with the above study.12

To Compare the Rate of Canine Retraction between PZ and MOP

In a clinical trial conducted by Norman to compare the rate of canine retraction using two springs, they found the average rate of retraction using NiTi coil springs was 0.58 ± 0.24 mm/4 weeks. The results of the present study show that both PZ and MOP accelerate tooth movement when compared to conventional orthodontics, but PZ shows a higher rate of retraction in comparison to MOP by 1.22 times.15

Limitation of the Study

The sample size in the present study was 15 sites; further studies with larger sample size are required to validate the results of this study.

11. Abdelhameed AN, Refai WM. Evaluation of the effect of combined low energy laser application and micro-osteoperforations versus the effect of application of each technique separately on the rate of orthodontic tooth movement. Open Access Maced J Med Sci 2018;6(11):2180–2185. DOI: 10.3889/oamjms.2018.386.