Effect of Stress-decreasing Resin Thickness as an Intermediate Layer on Fracture Resistance of Class II Composite Restoration: An In Vitro Study

How to cite this article Leonardy A, Abidin T, Dennis D. Effect of Stress-decreasing Resin Thickness as an Intermediate Layer on Fracture Resistance of Class II Composite Restoration: An In Vitro Study. World J Dent 2020;11(2):91–94.

Aim: The present study aims to investigate the effect of stress-decreasing resin (SDR) thickness as an intermediate layer in class II restoration.

Materials and methods: Forty human maxillary premolar teeth were obtained and divided into four groups: G1, G2, G3, and G4. G1 to G3 were restored using SDR as an intermediate layer and overlayed with packable composite, and G4 was restored only using packable composite. All teeth were stored in the saline solution for 24 hours and subjected to 250 thermal cycles. The fracture strength of the teeth was tested in a universal testing machine.

Fracture resistance depends on the material’s ability not to form microcrack. One of the factors that affect the microcrack formation is polymerization shrinkage.1–3 Polymerization shrinkage occurs during the hardening process caused by the increase in cross-linking polymer chains. The reduction of composite’s mobility due to the hardening process causes shrinkage and produces stress on the restoration margin. Microcrack at the restoration margin will reduce fracture resistance of a restoration. Fracture can occur by the propagation of microcrack that makes the teeth structure weak, losing the ability to resist the occlusal load.1,2,4 The stress of the restoration margin, which forms a microcrack, can further cause secondary caries and dentin hypersensitivity.4

The stress-decreasing resin (SDR) is a flowable composite with low viscosity before it polymerizes. The SDRs have the self-leveling ability, so it can adapt to the cavity wall well and follow the preparation shape. It is called as SDR because of its low shrinkage properties. Therefore, it is used as a base in classes I and II restoration and plays a role as the stress breaking layer. The SDR is also a unique combination of large molecular structure with a polymerization modulator in its monomer. This polymerization modulator will delay the polymerization rate and limit the shrinkage stress.7,8 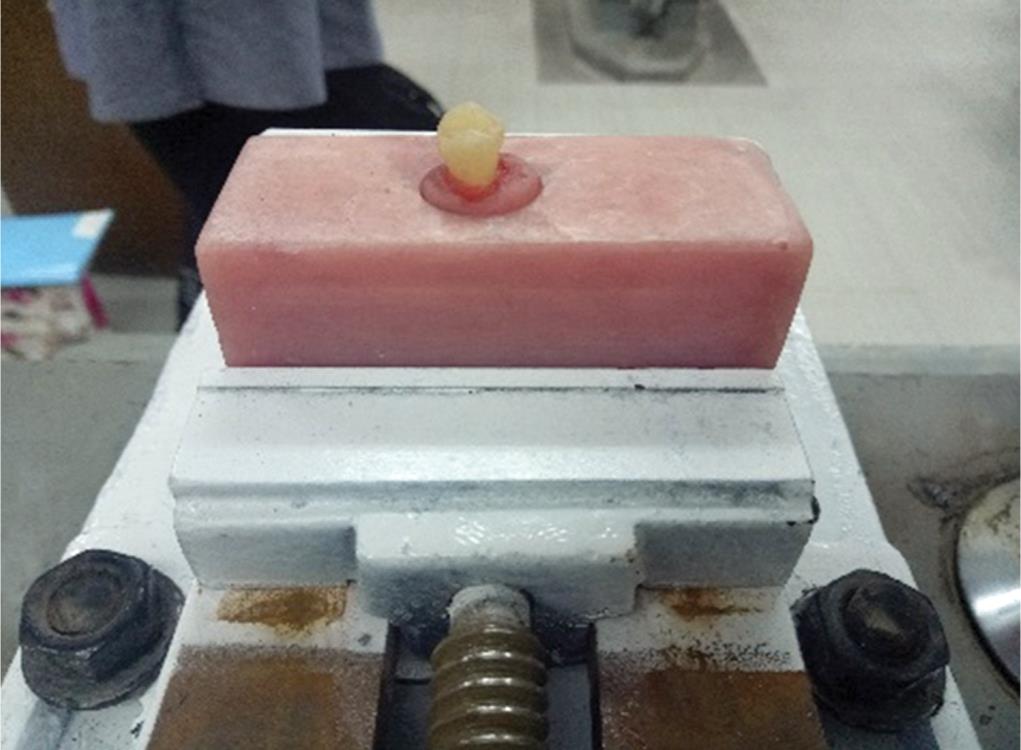 Fig. 1: The sample is fixed in a self-cured acrylic resin cylinder

This study involves a laboratory experimental study with posttest only control group design. The study was conducted in Conservative Dentistry and Endodontics, Faculty of Dentistry, Universitas Sumatera Utara. Forty maxillary premolars were obtained with selection criteria such as intact maxillary premolars (first premolar or second premolar), free of caries and any restorations, and also extracted for the orthodontic purposes. The teeth were cleaned of calculus and stored in saline solution.

All teeth were prepared with a class II mesio-occlusal cavity design with mesiodistal length of 4 mm, buccopalatal length 4 mm, and depth 5 mm without step. A caliper was used to measure the cavity dimension, and a periodontal probe was used to measure the depth of the cavity. Cavity preparation was done with high-speed round bur until the depth of 5 mm and then flattened with a fissured bur. Bevel was made along the cavity margin. All teeth were flushed and dried with cotton pellet.

The samples were randomly divided into four groups with 10 samples in each group based on the SDR thickness as intermediate layer that was used.

Palodent sectional matrix system (Dentsply Sirona) was inserted into the proximal area to be restored. Phosphoric acid 37% was used to etch all the samples for 15 seconds. The adhesive system was applied with a microapplicator to the cavities and gentle blow applied for 5 seconds and photopolymerized for 20 seconds. The SDR was applied in a bulk technique with different thickness based on the group and measured with a periodontal probe. The SDR was cured for 20 seconds. Ceram.x SphereTEC™ was applied layer by layer and each layer was polymerized for 20 seconds. All samples were polished by using a fine finishing bur and silicone bur. 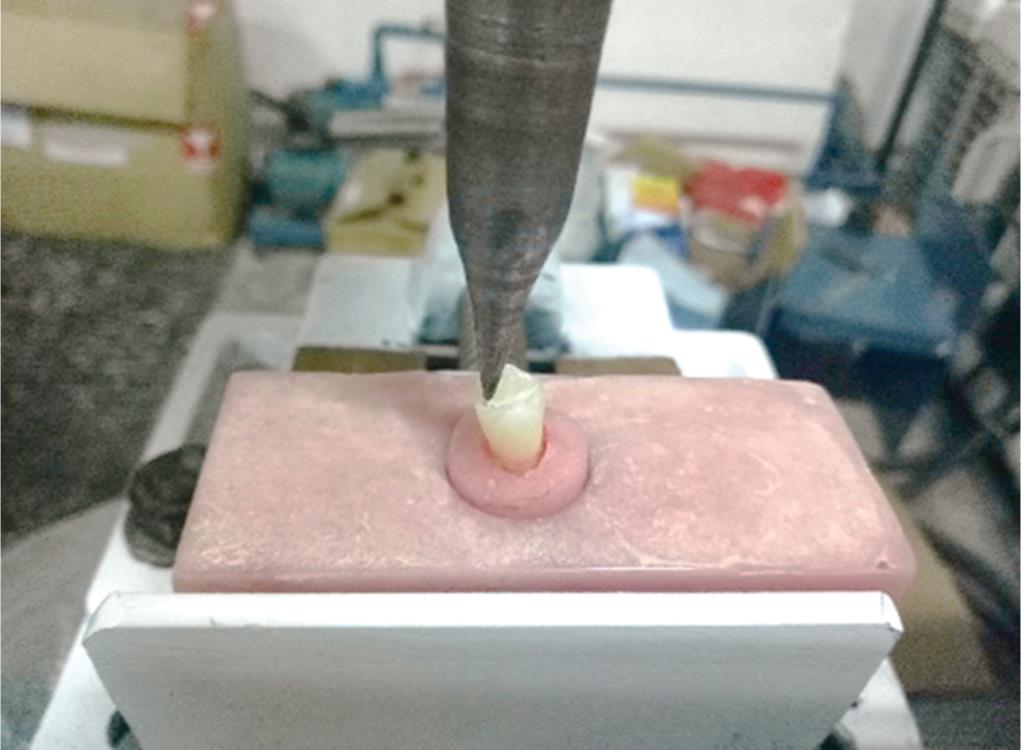 All samples were given a compressive load at a crosshead speed of 1 mm/minute by using Universal Testing Machine Shimadzu Servopulser SFL-100KN with an angle of 13.5° until the fracture occurred. The force when the fracture occurred was recorded in KgF and converted into Newton (N), and the conversion is 1 KgF equals 9.8 N. The results were then analyzed with one-way analysis of variance (ANOVA) test and post hoc test (p < 0.05) (Figs 1 and 2). 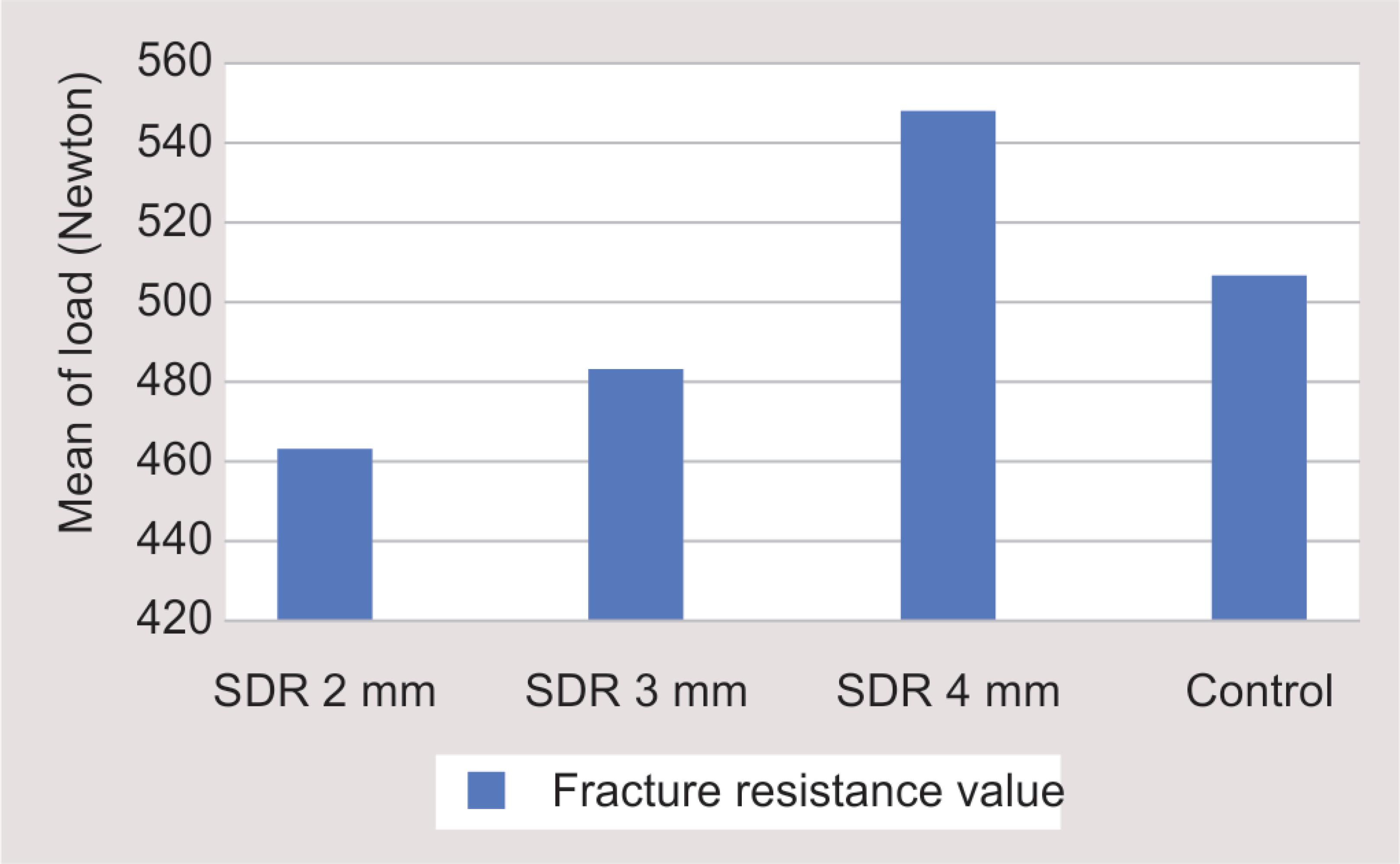 Fig. 3: Graph showing the mean load value of 2, 3, and 4 mm stress-decreasing resin (SDR) thickness and in the control group without using SDR

The results of this study show that group III, restored with 4-mm SDR as the intermediate layer, has the average fracture resistance value of 548.38 N which is the highest when compared to group I (2-mm SDR) with an average of 463.22 N and group II (3-mm SDR) with an average of 483.42 N. A 4-mm SDR also shows a higher fracture resistance value compared to the control group with an average value of 506.95 N. The statistical analysis showed no significant difference, according to the one-way ANOVA test (p < 0.05). These results show a correlation with the result obtained in an in vitro study by Natasha et al. which showed that different SDR thickness did not have significant difference in their microleakage that are also affected by the shrinkage stress and decreased the fracture resistance. But the research showed that thicker SDR as intermediate layer showed higher microleakage. The results show that the thicker the total composite volume, the greater the contractions.2

However, in the present research, the results show that thicker SDR as intermediate layer possesses higher fracture resistance. These results contradict the results shown by Natasha et al. But these results show a correlation with a study conducted by Yu et al. which showed that the thicker the SDR, the lower the degree of conversion, consequently the shrinkage would be lower too.9 The lower degree of conversion (DC) in the thicker SDR groups is affected by the large filler particles used in SDR (about 4.2 μm) which will reduce the light penetration and cure, increase translucency, and reduce the light interference and scattering. It means that the composition of composite materials that was polymerized during the curing process will be decreased. However, lower shrinkage will lower the chance of formation of microcrack during polymerization. Fewer microcracks will increase the fracture resistance of a restoration, which also will reduce the potential of secondary caries, dentin hypersensitivity, and pulpal irritation.1–3 The increase in fracture resistance of restoration will increase the success rate of composite restorations.

There are some limitations that may have influenced the result of the study. In this study, the fracture resistance test is conducted by using a universal testing machine. This machine is not able to mimic the condition of oral cavity completely. The machine will only show the static load and the occlusal force during the intrinsic occlusion. It is suggested to use a machine that can give a cyclic stress repeatedly, which is more similar to the daily masticatory force.15

The light intensity also plays a role in this study which can affect the degree of conversion of the material. The curing light intensity will decrease when the battery of the light cure unit is low. Roggendorf et al. in their study used a dental radiometer to measure the curing intensity on every sample.16 The thermocycling process used in this study showed that as much as 250 cycles could simulate the oral condition only for 10 days. According to the standard International Organization for Standardization (ISO) 11405, a total of 500 cycles are recommended in a material experiment to simulate the short-term aging of the material.17