How to cite this article Seaf E, Kasem T, Sulaiman AA. Evaluation of the Use of Platelet-rich Fibrin Dressing in the Management of Free Gingival Graft Clinical Study. World J Dent 2020;11(1):75–80.

Aim of the study: To evaluate the use of platelet-rich fibrin (PRF) dressing in the free gingival graft (FGG) recipient site by evaluating tissue healing and coverage of recession.

Materials and methods: The study included 40 patients having at least one site with Miller’s class II recession to be treated via FGG. The participants were divided into two groups: PRF group consisted of 20 patients who had PRF dressing used over the FGG and Coe-Pak™ group comprising 20 patients who received normal dressing (Coe-Pak™). Clinical periodontal parameters, healing index, root cover, and attached gingival width (AGW) were recorded prior to treatment and at 1 and 3 months postsurgery. A statistical analysis was performed to examine the differences between the study groups.

Conclusion: It may be concluded, within the study limits, that PRF dressing plays important role in the process of FGG healing.

Gingival recession (GR) can be one of the most challenging conditions for the periodontal surgeon. It can be defined as the displacement of the marginal gingiva apically with the exposure of the root surface. It has a common occurrence on the buccal surface of teeth.1 The resulting root exposure might contribute to dentin hypersensitivity, root caries, and, most importantly, esthetic distress. Gingival recession may be associated with morphological, functional, or inflammatory factors.2 Numerous surgical techniques have been suggested for the treatment of GR including free gingival grafts (FGGs), connective tissue graft (CTG), coronally advanced flap, laterally positioned flaps, guided tissue regeneration, acellular allograft,3 and PRF.4

Free gingival graft is one of the most common periodontal plastic surgeries. It is utilized to increase or establish the attached gingiva around teeth and reduce the GR. The FGG was introduced by Sullivan and Atkins in 1968. It has been used widely to increase the attached gingiva and root coverage. However, the obvious disadvantage of poor color matching, the postoperative morbidity,5,6 and the average percentage of root coverage are the shortcomings of this technique.7

Femminella et al.14 compared between PRF and a gelatin sponge in the management of palatal wounds and showed that the use of a PRF membrane as a palatal bandage is effective in accelerating palatal wound healing and reducing the patient’s morbidity.

The aim of this study was to evaluate the efficiency of using PRF when compared with non-eugenol-based dressings in the management of the FGG recipient site.

This study was granted approval from the Institutional Ethics Committee at Damascus University. This study is registered at Clinical Trials (identifier: NCT03589235).

A total of 40 patients who were referred to the Department of Periodontology, Faculty of Dentistry, Damascus University, were invited to participate in the study.

Subjects were included if they achieved the following criteria: Miller’s class II localized GR and at least 1–2 mm of keratinized gingiva on the facial aspect of the involved tooth.

However, patients were excluded if they had any of the following cognitions: systematic diseases, pregnancy, behavioral factors (smoking habits), and dental and periodontal factors (having periodontal surgery on the experimental sites, inadequate endodontic treatment, orthodontic treatment, restorative materials, or tooth mobility at the site of surgery).

Finally, all participants gave their written consent after being informed about the nature of the study.

The recipient site was prepared similar to the technique described by Langer and Langer.20 In brief, a horizontal incision was made at the existing mucogingival junction (MGJ) with a #15 blade, extending from interdental papillae mesially and distally of the GR area. Periosteum was left covering the bone at the coronal recipient site. The gingival tissue coronal to the horizontal incision was de-epithelialized. Wet gauze with saline was placed over the recipient bed until graft placement.

A graft measuring 1.5–2 mm in thickness was harvested from the area between the distal line angle of the maxillary canine and the mesial line of the first molar, located ≥2 mm away from the gingival margins. Strenuous effort was taken to make sure that all grafts are of similar size (15 mm length–10 mm width) with an even 2 mm of thickness. Later, the graft was positioned and stabilized with proper sutures (0.5 silk). Finally, two different dressings were applied over the graft to protect the graft. 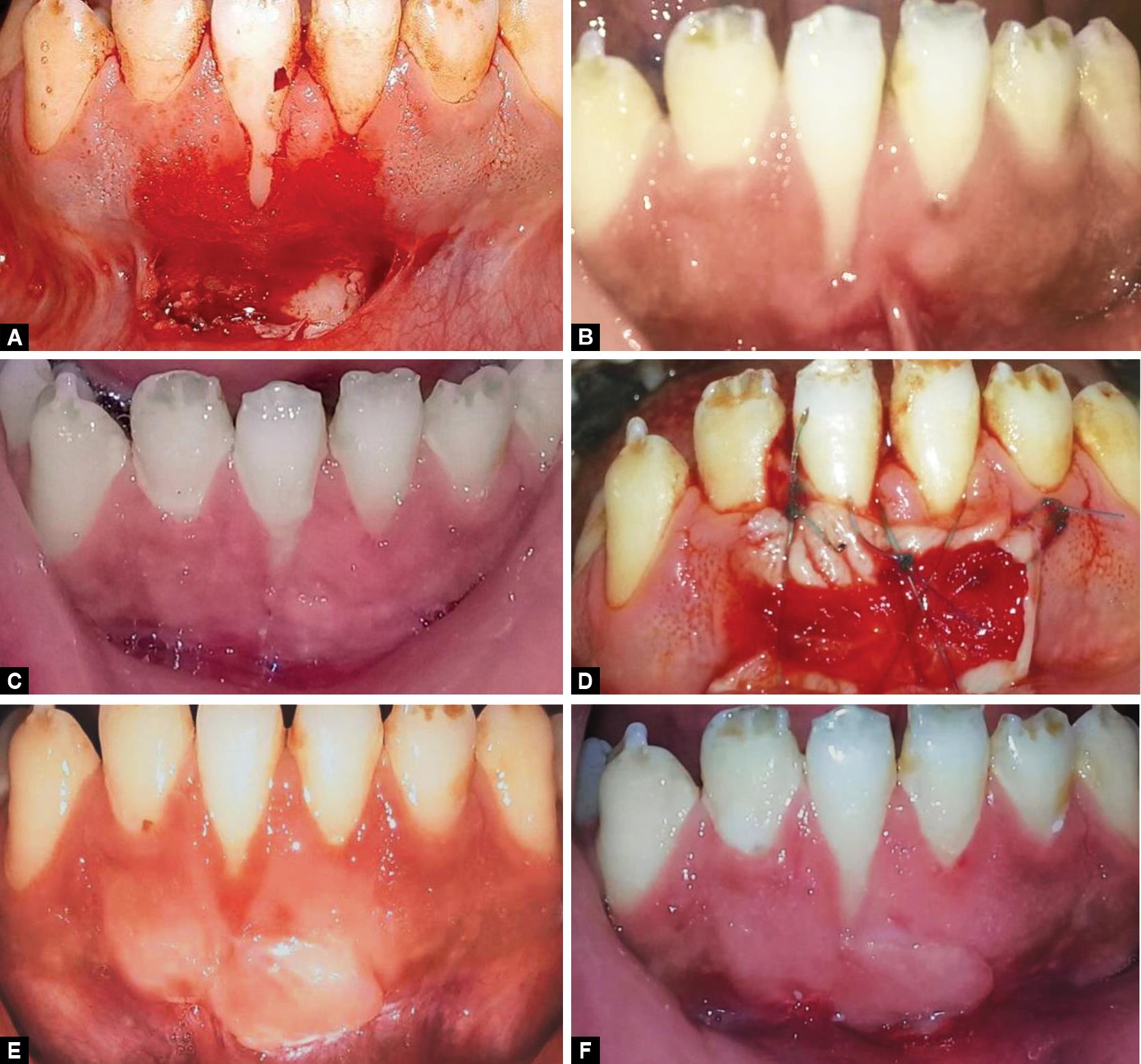 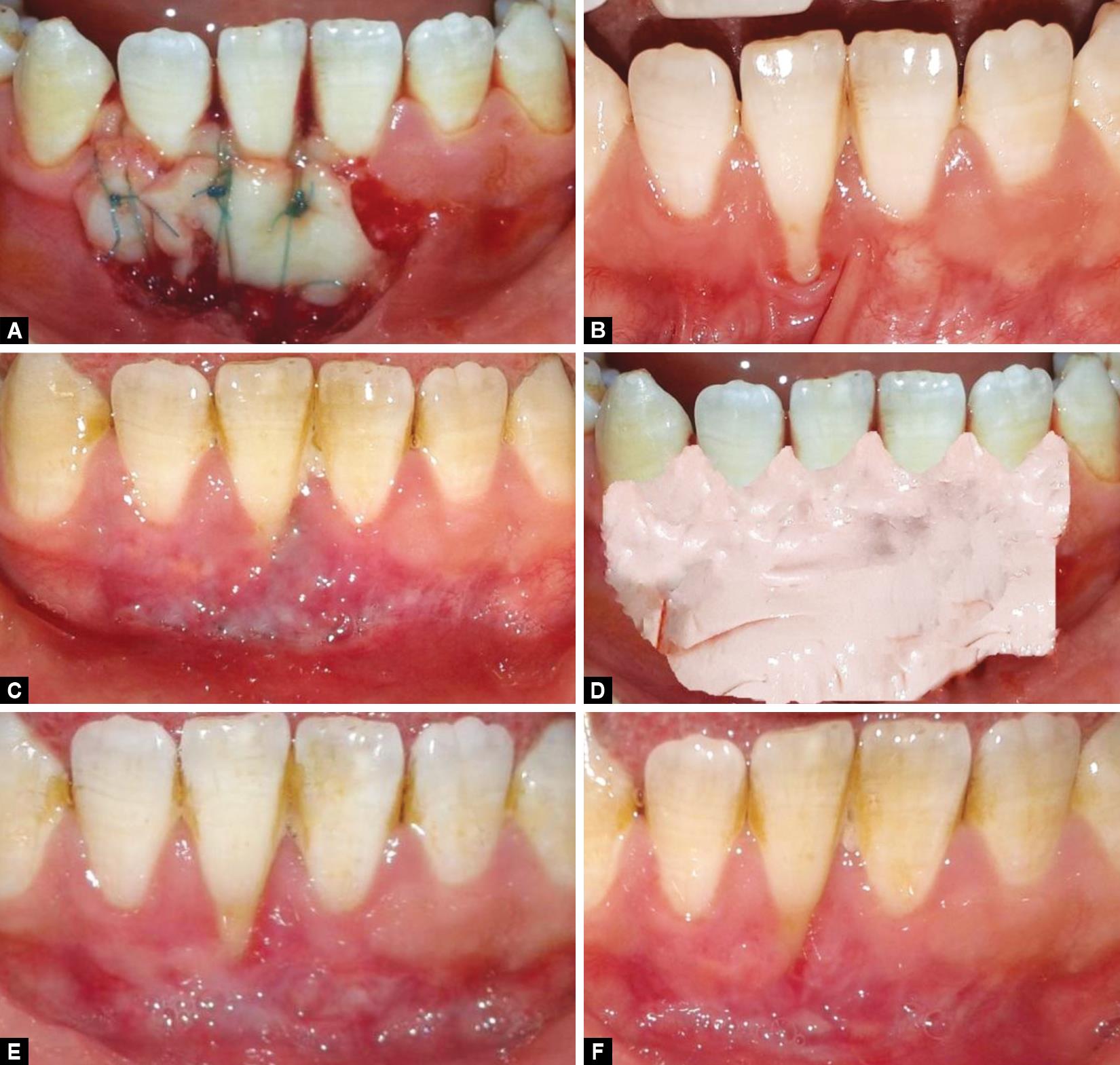 A 10 mL blood sample was taken by venipuncture of the antecubital vein from each patient; it was divided into two sterile tubes of 5 mL each. Immediately, the tubes were centrifuged at 3,000 rpm for 10 minutes. The fibrin membranes were obtained by squeezing the clot with dry gauze to use it as a PRF dressing over the FGG represented. Properly suitable sutures were used to stabilize the PRF dressing over the FGG recipient site.

The Coe-Pak™ dressing was prepared according to the manufacturer’s instructions. Then, the paste was modern into a roll. Eventually, the roll was applied over the graft, and a gentle pressure was used to stabilize the dressing into the interdental spaces. Overextension of the dressing onto uninvolved mucosa should be avoided.

Postoperative care instructions were given to the patients. Medications prescribed were amoxicillin 500 mg bid for 1 week, 0.12% chlorhexidine mouthwash, and an anti-inflammatory analgesic. The patients were instructed to mouthwash gently twice daily for 3 weeks. Toothbrushing activities in the surgical sites were discontinued. All patients had uneventful recoveries with no complications reported. Sutures were removed 10–15 days postsurgery.

Measurement of the FGG healing index was performed on the 10th day and 1 month postsurgery.

Statistical testing was employed using SPSS (version 21, Chicago, IL, USA). A descriptive analysis was conducted (standard deviation, mean, and frequency distribution) for the collected data. The Wilcoxon test was used to analyze the differences over time in the same group. The Mann–Whitney U test was used to assess intragroup comparisons. Data were considered statistically significant at level %3C;0.05.

The characteristics of the patient sample are presented in Table 1. The mean PI, BOP, and PD for the PRF and Coe-Pak™ groups at baseline and 3 months postsurgery are presented in Table 2. There were no statistically significant differences in periodontal parameters scores (PI, BOP, PD, GR, and AGW) between the study groups at the baseline examination (Tables 2 and 3). No significant differences were found at the 3-month postsurgery interval between PRF and Coe-Pak™ groups regarding PI, BOP, and PD.

Table 3 demonstrates the changes in GR and AGW at baseline, 1 month, and 3 months postsurgery. There were significant reduction in GR at the 1- and 3-month postsurgery intervals in both the PRF and Coe-Pak™ groups compared with baseline measures (p = 0.001). Similarly, the two groups showed a significant improvement in AGW at the 3-month interval (p = 0.001). Likewise, no significant differences were found at the 1- or 3-month postsurgery interval between PRF and Coe-Pak™ groups (p %3E; 0.05).

The increase in the gain of AGW was statistically significant. The mean gain was greater in the PRF group than in the Coe-Pak™ group at 1 month postsurgery (p = 0.02). However, Table 4 showed that there was no significant difference noticeable between the two groups at 3 months posttreatment (p > 0.05).

Finally, the data in Table 5 show that healing in the PRF group at 10 days postsurgery improved significantly as opposed to the Coe-Pak™ group (p = 0.004).

Biological dressings have been used to enhance the healing process and minimize the patient’s discomfort of the palatal open wound. Authors have investigated the usefulness of biological dressings in the management of hard and soft tissues in periodontal surgery. Platelet-rich fibrin clot plays an important role in accelerating healing in the medical and dental literature. Results obtained from clinical trials have evaluated the effect of PRF dressing in the management of the FGG’s palatal wound, suggesting that it reduced postoperative morbidity of the palatal wound.

To the best of our knowledge, this study is the first clinical trial to evaluate the efficiency of the use of PRF as a dressing over the FGG.

This study showed significantly improved healing (p < 0.05) among patients who had FGG + PRF in comparison with Coe-Pak™ particularly at the 10th day. These findings were in accordance with previously reported data in the literature regarding the use of PRF. In a recent case report, Ibraheem21 showed that the use of a PRF membrane is effective in accelerating the healing of FGG in treating soft tissue defects preceding implant placement and in increasing the keratinized tissue. Femminella et al.14 and Ozcan et al.22 used PRF bandage to reduce complaints due to the palatal donor site wound and demonstrated that PRF accelerates palatal wound healing and reduces the patient’s morbidity. On a parallel note, Desai et al. used PRF over skin wounds in the lower lip region and reported enhancement of wound healing and minimization of scars.

This finding was not in line with the data of Jahnke et al.23 who compared between FGG and CTG for root coverage in Miller’s class I and class II recessions and revealed a 43% root coverage percentage with FGG at both periods (after 3 and 6 months).

Several periodontal dressings have been employed in periodontal surgeries; nonetheless, no attempts have been made previously made to use PRF as a dressing over gingival grafts.8 These dressings demonstrated satisfactory clinical results, but their ability to assist healing has been largely through mechanical protection of the wound area. Despite Coe-Pak™ dressing used in our study being eugenol free and, thus, without any irritant that might cause any inflammation or pain, it has very little biological effect on the recipient region tissues.8,14 Hence, its principal function is to cover the graft and act as a mechanical barrier so as to ensure uncomplicated healing.

On a parallel note, data from this study yielded the clear advantage for PRF dressing in comparison with Coe-Pak™ dressing. The clinical outcomes of this study can be explained in the light of the properties of PRF.

First, the growth factors encompassed with the PRF are involved in promoting cell mitosis and induction of cell differentiation. In addition, the fibrin mesh acts as a scaffold supporting the growth factor and cytokines aggregation and facilitating their long-term release. Consequently, this will enhance the advancement of the healing process.12,14

Second, it enmeshes glycosaminoglycans from the blood and platelets, which have a great capacity to support cell migrations and healing processes.14

Third, PRF is an immune and platelet concentrate that collects on a single fibrin membrane.

The PRF membranes simultaneously support the development of the three keys to healing and soft tissue maturation, namely angiogenesis, immunity, and epithelial cover.15

This membrane protects open wounds and accelerates healing, favors the development of microvascularization, and guides epithelial cell migration to its surface. Furthermore, this matrix contains leukocytes. Although platelet and leukocyte cytokines are important in the biology of this biomaterial, the real therapeutic potential of PRF can be determined by the fibrin matrix supporting them.15 Therefore, its utilization seems to be of high significance in the case of infected wounds and as a protective dressing over an FGG.

Based on the results obtained from this study, it can be concluded that utilizing PRF dressing over an FGG resulted in more root coverage and improved healing compared with using Coe-Pak™ dressing. Thus, it is suggested that PRF can be considered a useful reliable dressing.