Investigation into the Effect of Mold Temperature on the Fatigue Deflection of Clasps of Commercially Pure Titanium: An In Vitro Study

How to cite this article Shenava A, Meshramkar R. Investigation into the Effect of Mold Temperature on the Fatigue Deflection of Clasps of Commercially Pure Titanium: An In Vitro Study. World J Dent 2020;11(1):69–74.

Aim: The aim of the study was to evaluate the effect of mold temperature [room temperature (32°C), 450°C, and 790°C] on the fatigue deflection of clasps of commercially pure titanium.

Materials and methods: Forty-five retentive wax profiles were cast in molds having three different mold temperature [room temperature (32°C), 450°C, and 790°C]. Specimens of grade 4 titanium, following the eligibility criteria, were selected. A 2-mm deflection test was done using an Instron machine and the flexibility of clasps of the respective groups was calculated. Deflection fatigue was tested using a cyclic-loaded custom-made oscillating machine by calculating the number of loading cycles required to fracture the specimen.

Clinical implication: The ideal temperature for a titanium casting with relatively high fatigue strength would be 450°C mold temperature or room temperature. By investigating the fatigue deflection, it is clear that a desired undercut should be planned before clasp designing, considering the metal to be used.

Fatigue is the loss of mechanical properties of materials after repeated loading.1 It is influenced by many factors including the quality of surface, metallographic microstructure, and presence of internal defects. The clasp of a removable partial denture undergoes fatigue during constant deflection of the clasp during insertion and removal over the undercut of the teeth.2

Titanium is very reactive at high temperature, is easily oxidized, and reacts with investment components. The mold temperature is an important factor that affects the quality of titanium castings. The thickness of the surface reactive layer has been reported to be about 85 μ at room temperature, 120 μ at 850°C, which in turn alters the physical and chemical properties of titanium.3,4

Although fatigue fracture can occur in a highly polished specimen, the crack initiation procedure is facilitated by surface roughness and irregularities.5 Kenneth stated that most prosthetic and restoration fractures develop progressively over many stress cycles after initiation of a crack from a critical flaw and subsequently by propagation of the crack, until an unexpected fracture occurs.6 Stress values well below the ultimate tensile stress can produce premature fracture of the dental prosthesis because microscopic flaws grow slowly over many loading cycles of stress, and this phenomenon is called fatigue failure. Fatigue failure is determined by subjecting a material to cyclic stress of a maximum known value and determining the number of loading cycles that are required to produce it. The stress distribution may depend on the elastic modulus of the alloy, dimensions and curvature of the clasp, and the amount of deflection in relation to the abutment undercut.7

Deterrents to the use of titanium in dentistry have been its high melting temperature (1,670°C) and reactivity, rendering the casting operation very difficult and necessitating special melting procedures, mold material, and equipment.8,9 The mold temperature affects the reaction of the metal with the investment material.10 The variation in the temperature of the casting ring at the time of flow of molten metal may cause solidification, which may result in different magnitude and direction of the casting shrinkage along with inaccuracy of casting due to various degrees of thickness of surface reactive layer, which affects the strength of the material.11 The deflection is important as the clasps bend minimum 10 times per day due to insertion and removal and leads to its dislodgment occasionally.12 Such repeated deflection may induce fatigue into the clasp arm, leading to its fracture. The fracture of the clasp arm may be precipitated by the internal artifacts such as porosity and formation of hard layer on the surface due to high temperature of the molten titanium (liquidus temperature) casting in contact with mold walls having too low temperature.13

This was an in vitro experimental study done at the Department of Prosthodontics SDM College of Dental Sciences, Dharwad. Prefabricated 45 straight tapered half-round wax profiles (0.08 mm in diameter and 3.2 cm in length, Dentarum, Germany) were used for this study (Fig. 1). The liquid and powder ratio used is 45 mL:100 g which is weighed using an electronic balance (Multivac 4-degussa Germany). Phosphate-bonded silica investment (Titek GMG—Oratig, Italy) was used as the investment material for the three groups of wax profiles of 15 each.

The temperature of the burnout machine with three casting molds of 15 wax profiles each was gradually increased from room temperature to 450°C. It was held at 450°C for 30 minutes before heating to 950°C. The first mold was cooled in the burnout machine and casted at 790°C (GC) and casting was done. The second was cooled to 450°C (GB) followed by casting and the third mold was cooled at room temperature (GA) and casted. The castings were done in Titec F210 M semiautomatic casting machine under 4 bar pressure of argon (inert argon gas atmosphere to prevent excessive reaction of the molten titanium with oxygen in the atmosphere). Commercially pure grade 4 titanium (N2—0.04%, C—0.02%, H2—0.0030%, Fe—0.10%, and Ti—99.5370%) was used. Grade 4 titanium was used with thermal conductivity 20.1 W/m K, elongation 15%, density 4.5 g/cm3, modulus of elasticity 104 GPa, and tensile strength 550 MPa.14 The casted samples were surface polished using titanium polishing kit (Rematitan) to remove the surface nodules without removing the outer layer and were sandblasted. All clasps were subjected to radiographic evaluation, i.e., out of 45 clasps 6 clasps from GA, 5 clasps from GB, and 8 clasps from GC revealed large porosities and nodules (Fig. 2). They were replaced in their respective groups and subjected to loading. 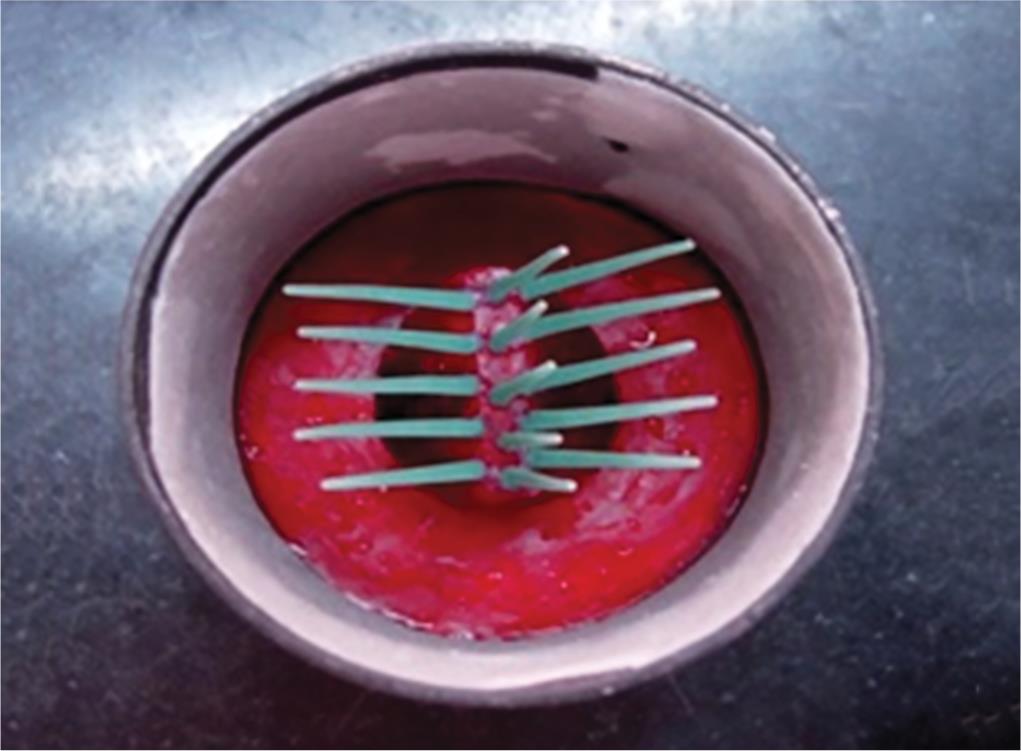 The flexibility of the clasps casted at room temperature (FA), 450°C (FB), and 790°C (FC) was calculated using the formula: flexibility = displacement (mm)/load (Kgf). For the purpose of testing the fatigue deflection, the clasps were deflected to 2 mm and the load was noted using a universal testing machine (Instron Digital 4467 series) (Fig. 3). The clasps were subjected to cyclic loading using a modified custom-made oscillating cutting machine tool (Model CD301 370 W Type1 Black and Decker 50 Hz, 3,100/minutes), which was fixed on a table top, with a custom-made jig having a spring-loaded device to return the clasp to its original position (Fig. 4).

Vertical level of the hitting head was adjusted, so that it resulted in 5 mm deflection of the clasp. A stop watch was used to note the time required till the clasp bars fractured. The time taken multiplied by the oscillating cycles/min resulted in the loading cycles required to fracture the clasp. 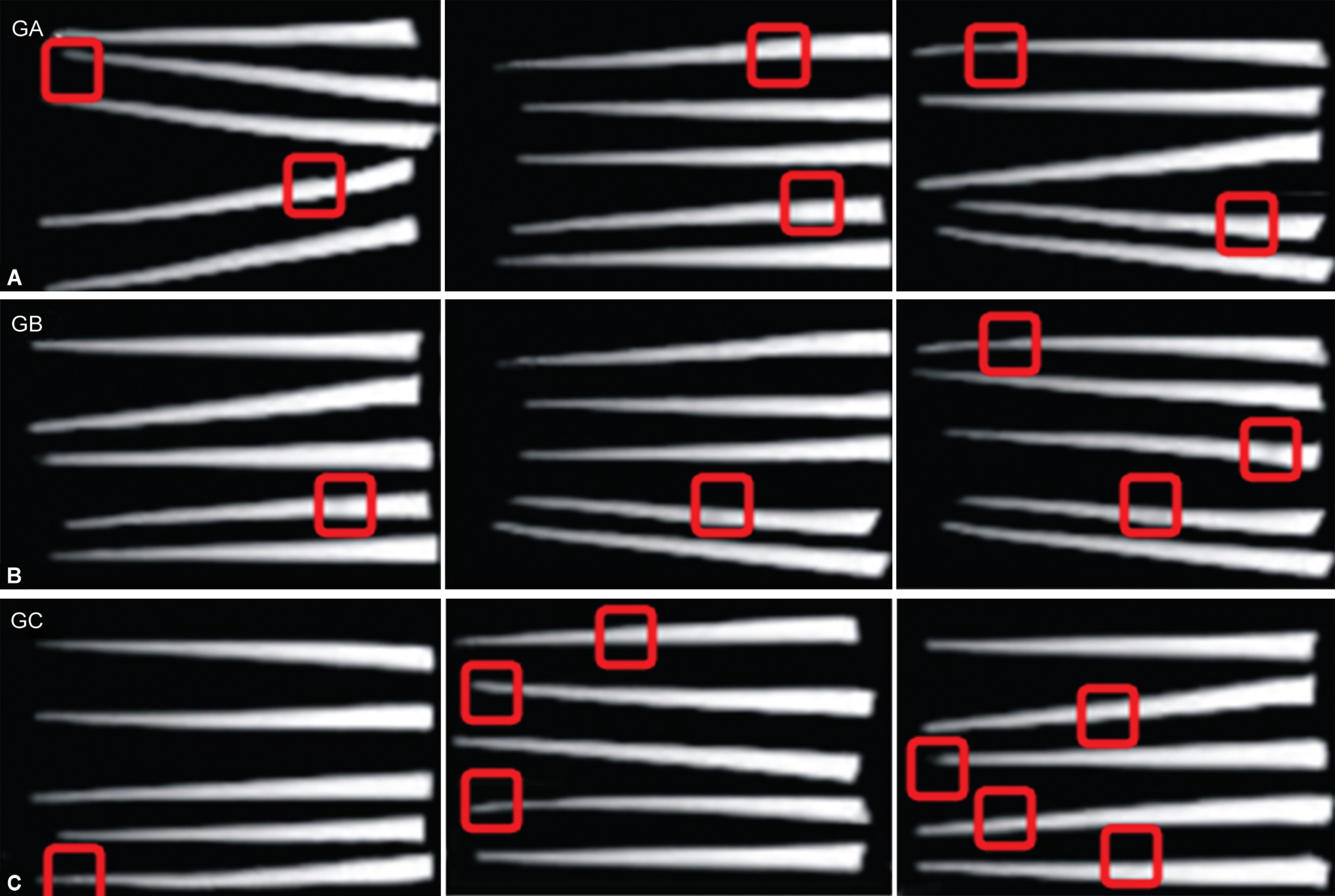 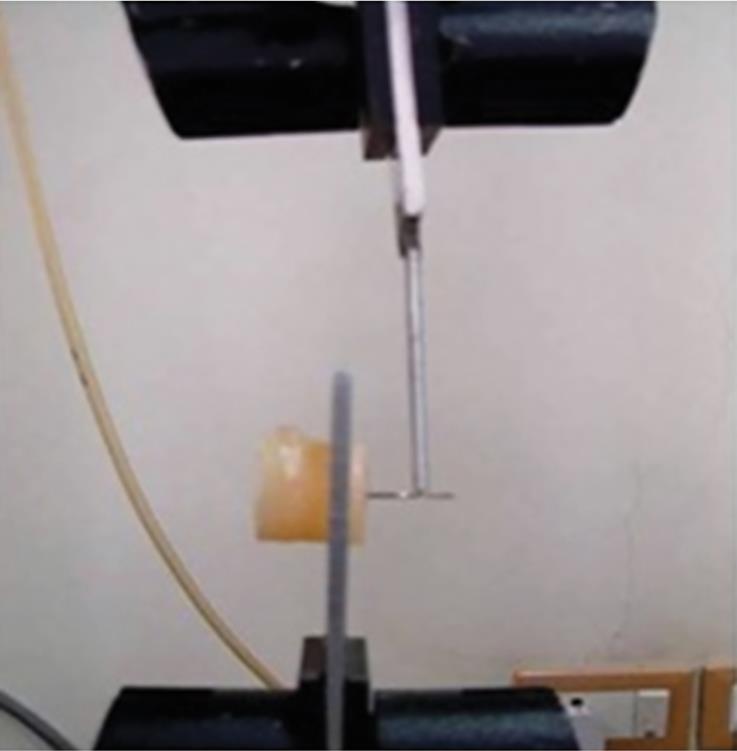 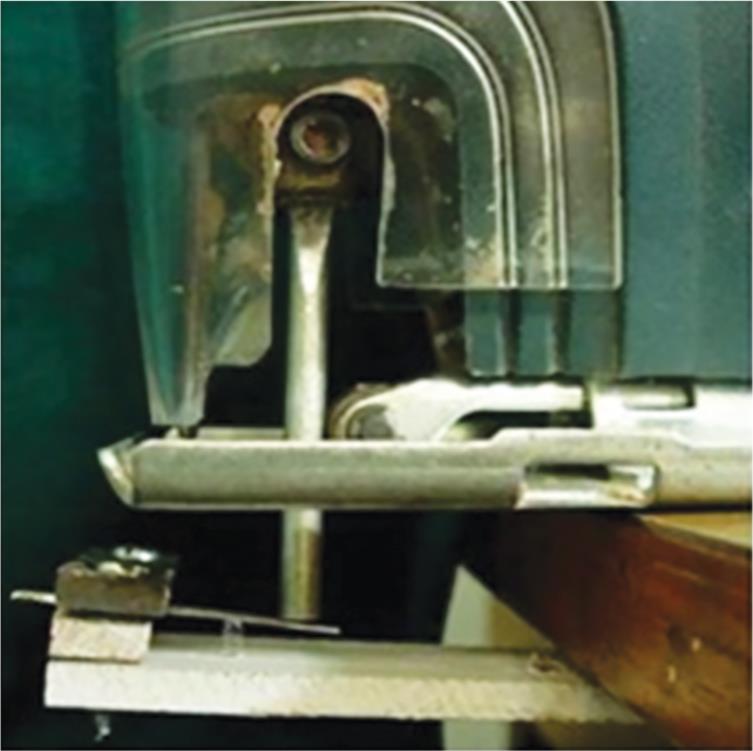 Inference of the Study

In the present study, the titanium clasps casted at room temperature and at 450°C had more fatigue strength compared to the clasps casted at 790°C. This was substantiated by the mean loading cycles required to fracture the clasps at room temperature, 450°C, and 790°C which are 3,654–8,650, 3,100–8,212, and 2,597–5,910, respectively. Thus, the mold temperature has a direct effect on the fatigue strength of the casted titanium clasps.

The loss of retention of removable partial denture during insertion and removal of the denture affects the clasp by causing metal fatigue.5,15 The constant deflection of the retentive arm of the clasp affects the physical properties mainly the flexibility. As the number of deflection increases, it has been shown that the deflection fracture strength decreases for titanium; therefore, deflection fatigue strength was evaluated in this study (ADA specification no 19.1999).16 Deflection of 2 mm was considered during the loading as it represents maximum activation of retentive arm during insertion and removal of titanium cast partial denture. This was an in vitro study because it is not practical to calculate the force of insertion and removing the removable partial denture in patients.

The flexibility and deflection fatigue strength are affected by grain structure during the solidification of the metal. Fatigue fracture initiation involves the sliding of metal atoms along slip planes within each crystal grain.17 The grain structure and the boundaries may be affected by the presence of voids which is a common occurrence in cast titanium structure.18,19

The test samples (45 clasp bars further divided according to the temperature at which they were casted) were prepared uniformly as mentioned in the materials and method. After casting, it was considered appropriate to take radiographs of titanium clasps since porosities are most common with commercially pure titanium casting. Renata Rodrigues suggested that the porosities might have occurred because of high argon pressure.1 Morris et al. suggested that the cause for porosity is inadequate filling of the mold. The other cause may have been the temperature difference between the fluid titanium (1,670°C) and the mold temperature, which causes rapid solidification of the metal, decreasing the escape of gas from the mold.20,21 In this study, porosities were more compared to the clasps casted at 750°C which increased the flexibility of the clasps and thus decreased their strength.

The oscillating cutting machine tool (Black and Decker 50 Hz, 3,100/minutes) is applied to the specimen which replicates the masticatory forces [the force generated during routine mastication is about 70 to 150 newtons (16 to 34 lbf), the maximum masticatory force in some people may reach up to 500 to 700 newtons (110 to 160 lbf)]. Fatigue testing subjected the sample to rapid cycling load until failure occurs.22 After each deflection, the force is released and the resiliency of the material returns to its original position unless changes have occurred within the structure. A clasp will be permanently deformed if it is placed into a deep undercut because it will exceed the proportional limit.23 To avoid immediate failure, the cylindrical stress generated was within the proportional limit of the component material.

The specimens were only surface polished, leaving a relatively rough surface finish, thus preserved the outer α case layer. The fixed cycling frequency of 3,100/minutes (50 Hz) was higher than the reported chewing rate (i.e., 1–2 Hz). Increased loading rate slightly improves the fatigue resistance of the materials. However, significant effect was observed when the loading frequency was increased. The dimension of the clasp used in the study was 0.8 mm in diameter which is semicircular and 3.2 cm in length which tapers toward the tip, this explains the variation in the loading cycles. Lewis and Iona et al. suggested that the presence of internal defects could make castings prone to failure in two ways (1) large voids reduce the effective area of the component making it too weak. (2) microporosities can cause stress concentration and become sites of crack initiation.24–26 Since quenching (heat hardening treatment) causes change in physical and mechanical properties of a metal or alloy, all samples were cooled at room temperature and not quenched. An important factor that influences the strength is the grain structure.27

Thus, the mold temperature ideal for titanium casting is within the range of 450°C, less porosities are seen, which in turn helps in enhancing the strength of the metal and prevents fracture

Limitations of the Study

The ideal temperature for a titanium casting with relatively high fatigue strength would be 450°C mold temperature or room temperature. It can be roughly estimated that the clasp bends during insertion and removal of the removable partial denture (RPD) including mastication, which means the clasp is affected by deflection. If no undercuts are given, it may fracture the clasp and also cause wearing of the tooth surface. By investigating the fatigue deflection, it is clear that a desired undercut should be planned before clasp designing, considering the metal to be used. Dentists should evaluate the active clasp length of each flexible clasp arm they design. They should realize that the force required to produce the deflection is an important part of retention of the partial denture.