Materials and methods: A total of 160 mandibular molars with symptomatic IP randomly received conventional IANB either with one (1.8 mL) or two cartridges (3.6 mL) of 4% articaine after ketorolac oral premedication. Each group was further divided into two subgroups: one with BI with 1.8 mL articaine and the other with mock BI. Patients recorded their pain before and during access cavity preparation as well as during root canal instrumentation using a Heft–Parker visual analog scale (HP VAS). No or mild pain was considered as successful anesthesia.

Management of pain in teeth with irreversible pulpitis (IP) is one of the main concerns in any endodontic practice. To improve the success in IP, several clinicians have tried using different anesthetic solutions, additional volume given via same or different inferior alveolar nerve block (IANB) techniques (Gow Gates, Vazirani-Akinosi) or via supplemental technique (infiltration, intraosseous, intrapulpal, and intraligamentary) with and without nonsteroidal anti-inflammatory drugs (NSAIDs). Articaine was approved by the Food and Drug Administration for use in dentistry in the United States in 2000. It has a much faster onset of action and longer duration of pulpal anesthesia. Eighty percent of all local anesthetic used for endodontic treatment in Germany is reported to be articaine.1 Articaine IANB alone does not results in an increase in anesthetic success when compared with lidocaine. The use of IANB with supplemental buccal infiltration (BI) or/and NSAIDs resulted in an increase of 6–42% in comparison with lidocaine alone.2–7 The purpose of this prospective, randomized, controlled, double-blind study was to achieve maximum anesthetic success using ketorolac premedication with 1.8 and 3.6 mL of articaine IANB with or without BI in teeth with symptomatic IP.

A total of 160 patients actively experiencing pain in mandibular first or second molar were included in this study. At the initiation of the study, the groups did not differ significantly with respect to the patient’s age, gender, type of tooth, and preoperative pain; hence, the effect of these variables on the result was expected to be minimal. The patients did not give a previous history of adverse reaction to any kind of local anesthesia, sulfites, or other drugs, and none were on any medication. The research protocol was approved by the Ethical Committee of the institution. Recruitment of the patients was done after their informed written consent. Inclusion criteria for patients were preoperative intraoral periapical radiograph (IOPA) showing absence of periapical radiolucency, prolonged response to cold test with Endo-frost (Roeko, Langenau, Germany), and a vital coronal pulp on access opening.

Patients were randomly divided into four major groups (n = 40) by the second investigator (Table 1). Folded paper slip assigned with 40 sets of 4 numbers (1, 2, 3, and 4) were placed in a jar, and patients were asked to pick one slip. Depending on the slip picked, the patient was assigned to one of the four experimental groups and that slip was then discarded.

Before starting the treatment, the first investigator asked the patients to rate their pain on an Heft–Parker visual analog scale (HP VAS). The millimeter marks on 170-mm line on the HP VAS were removed from the scale, and the scale was divided into four grades: “no pain” corresponded to 0 mm; “faint or mild” pain corresponded to 0–54 mm; “moderate” pain to 55–114 mm; and “strong, intense, and maximum possible” pain corresponded to above 114 mm.5 Articaine of 4% with 1:100,000 epinephrine (Septodont, Saint-Maurdes-Fosses Cedex, France) was used for all IANB and BI throughout the study to anesthetize the teeth. All patients received oral premedication with ketorolac (10 mg) 45 minutes prior to IANB. Table 2 shows the distribution of the study population based on sex, mean age, HP VAS score, and tooth type.

* Significant difference between males and females in group I

To provide double-blind investigation, each patient received one cartridge of anesthesia solution as IANB followed by another cartridge or a mock injection and one cartridge or mock injection as BI. A supplemental BI injection was given adjacent to the IP molar, bisecting the approximate location of the mesial and distal roots at the mucobuccal fold. The needle used for mock injections was normally engaging the anesthetic cartridge was bent over so that it did not enter the rubber diaphragm. The needle was inserted into the tissue and held in position for 1 minute to mimic an IANB injection. Articaine (actual/mock) was injected for IANB by the second investigator using self-aspirating syringes (Septodont) and 27-G-long needles (Septoject; Septodont). After 10 minutes of the initial IANB, each patient was asked if his/her lip was numb. If profound lip numbness was not recorded within 10 minutes and cold testing with Endo-frost (Roeko, Langenau, Germany) was also positive, the block was considered unsuccessful, and the patients excluded from the study.8 After successful IANB, patients were further given articaine BI (actual/mock). The first investigator then isolated the tooth with a rubber dam, removed dental caries, and performed conventional access opening followed by canal instrumentation. Patients were asked to raise their hand if they experienced pain during the procedure. In case of pain, the procedure was halted, and the pain was recorded on the HP VAS. The success was defined as “no pain” or “weak/mild” pain during access cavity preparation or/and canal instrumentation.2 The data were recorded for the statistical analysis. Kruskal–Wallis test and t tests were used to determine the significant differences at p < 0.05. 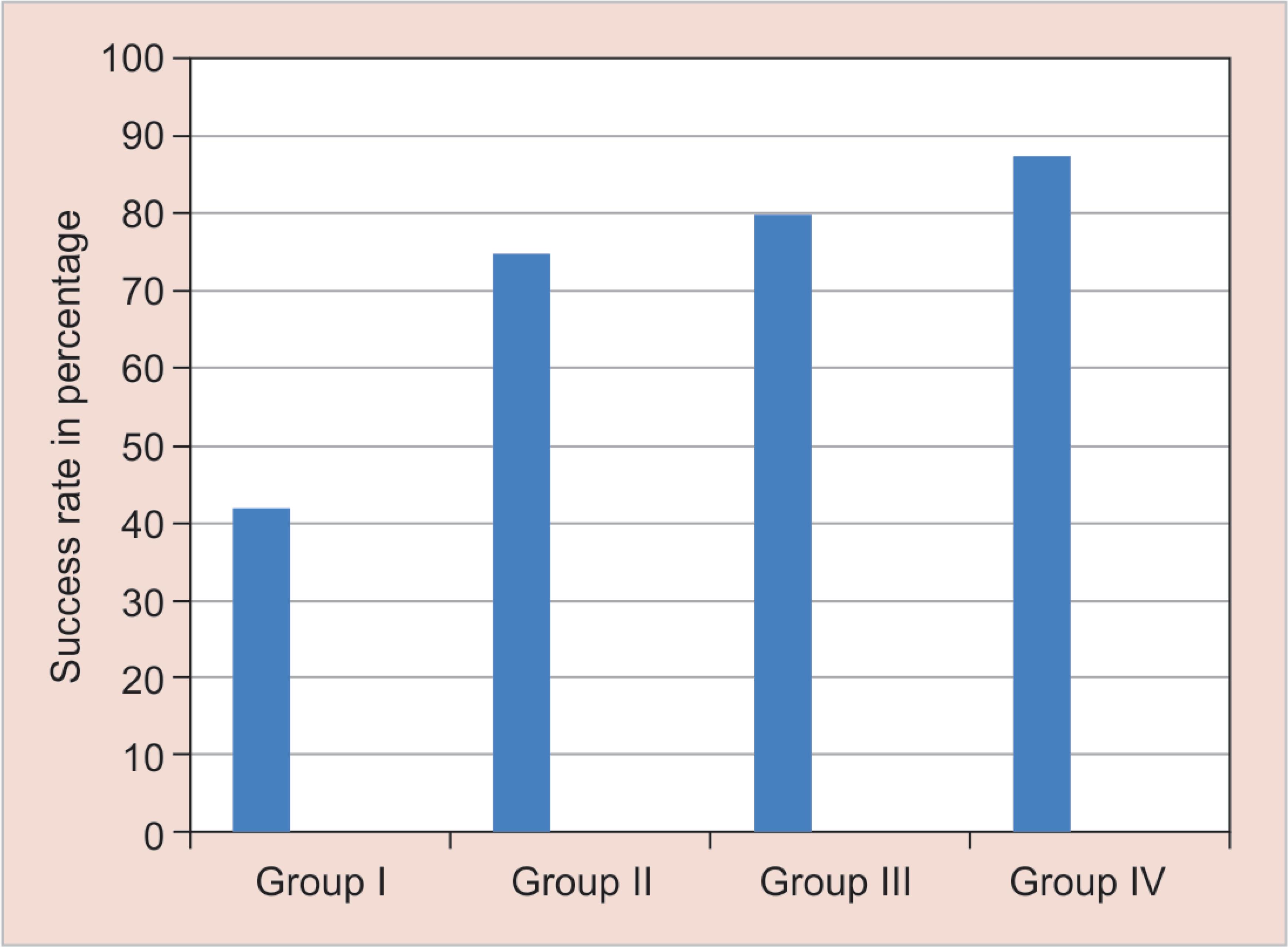 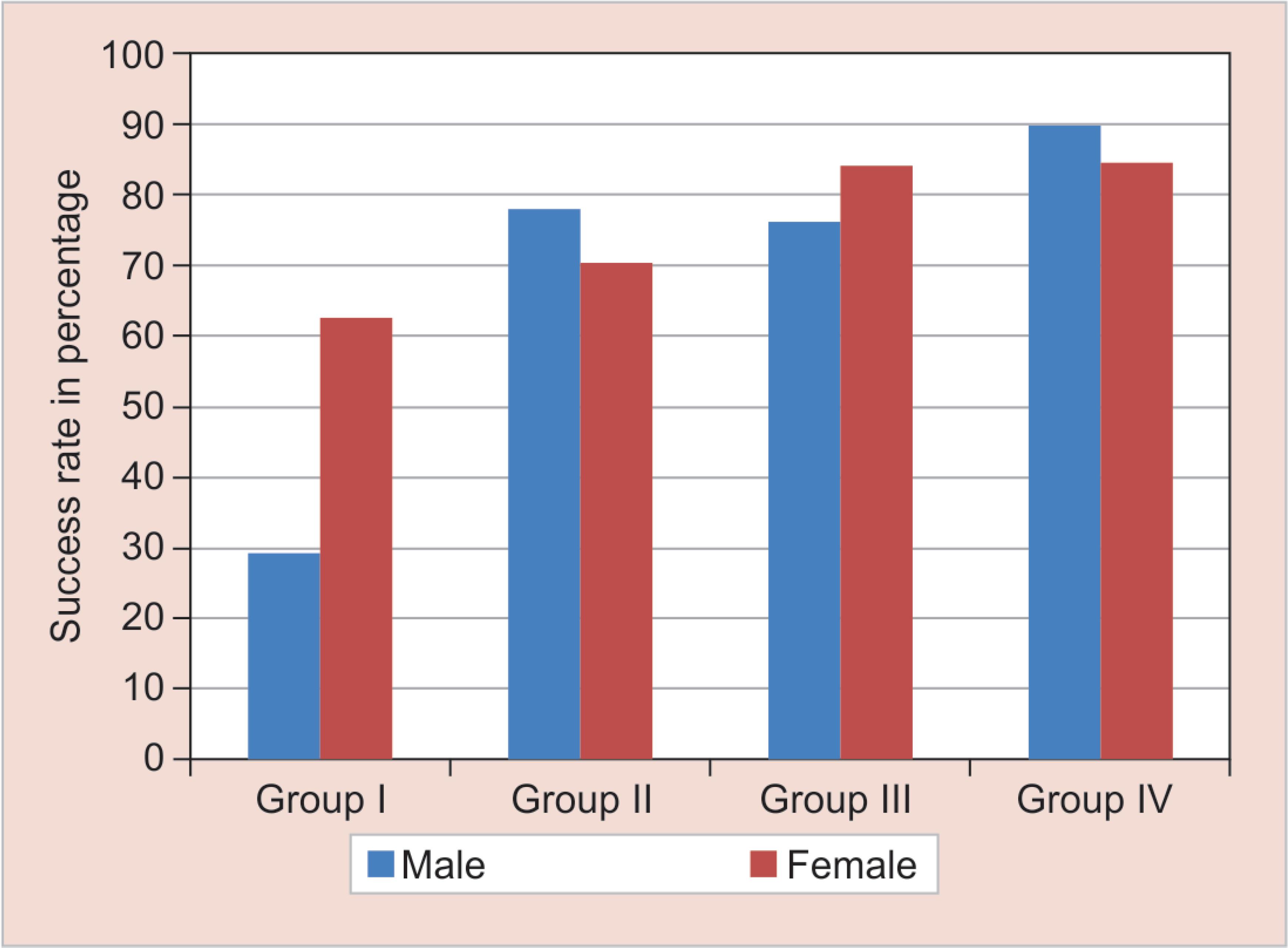 Fig. 2: Success rate in both genders in different groups

* *Significant difference was found between the two groups

A total of 160 adult patients aged 18–45 years who reported with IP were selected for the retrospective, randomized, double-blind study. There was no significant difference in age, sex, or initial HP VAS score between the groups. Success rate and group characteristic of overall and randomized IANB with different volumes and supplemental BI with ketorolac is presented in Table 3 and Figures 1 and 2.

Failure of IANB in IP and acute apical periodontitis is a common problem. One common explanation for decrease in the success rate of local anesthesia in IP can be the activation of nociceptors by inflammation.9–11 Inflammatory mediators reduce the threshold for activation of nociceptor neurons, thus decreasing anesthetic success.11,12 The inflammatory process is mediated via prostaglandins,13,14 which act by sensitizing nerve endings to bradykinins and histamines and hence enhance the pain and tenderness during inflammation.9–14 By 2007, articaine was described as accounting for approximately 25% of total sales, in the United States second only to lidocaine at 54%.15 The chemical composition of articaine contains a unique thiophene ring, whereas in lidocaine and other amide-based local anesthetics, there is a benzene ring. The presence of thiophene ring increases diffusion through the lipid membrane of the epineurium, which results in rapid onset of anesthetic effect and higher success rate when compared with lidocaine.16,17 When articaine and lidocaine IANB were compared without supplemental techniques (premedication and infiltration NSAIDs and anesthesia), there was no significant difference in anesthetic success for teeth with IP.2–7,18,19 In cases of persistent pulpal pain, supplementary infiltration with articaine instead of lidocaine has 3.55 times greater likelihood of achieving anesthetic success.20 This may bring up the point that supplementing BI along with IANB could be a reliable choice for anesthetic success. NSAIDs such as ibuprofen and ketorolac have been shown to provide significantly better pain control over placebo to reduce inflammation.21–23 Ketorolac, a pyrrolo-pyrrole derivative, is as effective as morphine or meperidine for pain relief.23,24 Ketorolac reduces pain and inflammation by inhibiting the enzyme cyclooxygenase.25 A 10-mg dose of oral ketorolac is completely absorbed and reaches mean peak plasma concentration at an average of 44 minutes.26 In our study, oral premedication with ketorolac was given 45 minutes prior to the procedure so that satisfactory plasma concentration can be reached. As NSAIDs decrease the level of inflammatory mediators and reduce nociceptor activation, it is hypothesized that premedication with NSAIDs would improve the success rate of local anesthesia in patients with IP.27,28 Ianiro et al.29 demonstrated a success rate of 76% for the combination of acetaminophen and ibuprofen and 71% for the acetaminophen group, whereas for the placebo group, it was only 46%.

Aggarwal et al. reported an increased success rate with ketorolac premedication, although this result was statistically insignificant with respect to placebo.30 According to a study in 2009, with the use of double volumes of anesthetic solutions, the success rate of the articaine (65%) was higher than that of the lidocaine (45%) during access and canal instrumentation.31 Abazarpoor et al. reported a significantly higher success rate of 77.5% with 3.6 mL of articaine when compared with 27.5% with 1.8 mL of articaine during access and instrumentation.32 However, both the studies did not use any supplemental infiltration and oral premedication. Various combinations of anesthetic solutions, IANB, BI, and preoperative analgesic have been used. Recently, Yadav et al. indicated that when oral premedication of ketorolac was given in mandibular teeth with IP, a higher success rate of articaine and lidocaine IANB with infiltrations was observed at 76% and 56%, respectively; however, the success rate dropped significantly to 64% and 32% without ketorolac premedication.5 Ashraf et al. achieved highest anesthetic success rate at 71% during canal instrumentation, where the investigators used IANB with supplemental BI.3 Also, Sood et al. reported highest success rate at 88% with articaine IANB for mandibular molar without supplemental technique, seems overestimated. Articaine infiltration on both buccal and lingual sides of posterior mandibular teeth with IP after a lidocaine IANB resulted in success rates of 64–67%.5,6 In this study, supplementing BI for both double- and single-volume articaine IANB with ketorolac premedication resulted in a higher success rate of 87.5% and 75%, respectively. When this was compared with double- and single-volume articaine without BI, the success rate drops to 80% and 42%, respectively. Articaine IANB along with BI significantly increases the anesthetic success rate in comparison with single-volume articaine (75%, 42%). We could achieve a higher success rate in mandibular teeth with IP using a combination of increased articaine volume, oral ketorolac premedication, and BI. Our method of evaluating anesthetic success was VAS during access and canal instrumentation. Increased volume of IANB solution results in a higher concentration of anesthesia in pterygomandibular space and exposure of greater length of inferior alveolar nerve, thereby resulting in improved anesthetic success in this study.33 Haas and Lennon34 reported that incidence of paresthesia related to articaine or prilocaine is as rare as 1:785,000 injections. Malamed et al.35 in their study have demonstrated equal incidence of paresthesia associated with articaine and lidocaine. In our study also, none of the patients reported any paresthesia/neurotoxicity after articaine IANB and BI. Maximum recommended dose for 4% articaine with vasoconstrictor is calculated at 7 mg/kg, i.e., 448 mg or 6.2 cartridges for a 63-kg individual. In this study, dose calculation was done so as not to exceed the permissible limit.36

To conclude, 3.6 mL articaine IANB and BI with ketorolac resulted in the highest anesthetic success rate of 87.5% in patients with IP during access and instrumentation. When 3.6 mL or 1.8 mL IANB with BI was compared with IANB without BI, there was a decrease in the anesthetic success rate from 87.5% or 75% to 80% or 42%, respectively. Articaine IANB of 1.8 mL with ketorolac resulted in a statistically significant lower success rate of 42% when compared with all the other groups in this study.